Hi, I’m having a problem where I can turn on my Raspberry Pi and backpower it from a Navio+ board from my 3s lipo. With a 2s lipo it works fine. It stays on for maybe 20 seconds, enough for me to connect to it over SSH and begin configuring APM to connect to my ground station. It pretty quickly crashes, however, and enters a loop wherein it keeps on trying to turn on and crashes after a few seconds before finishing its boot.

I am using 4 12A ESCs to power my motors and a power distribution board, which is connected to the power module provided by Emlid. One of the ESCs gets really hot while this is happening, and in order to reset the cycle (ie let me keep it on for around 20 seconds again) I have to wait for the ESC to cool down. It still heats up with the 2s battery but doesn’t get quite as hot.

If I use the micro usb port to power the Raspberry Pi it doesn’t crash and the ESC doesn’t heat up (as would be expected) but if I then plug in the battery it crashes after heating up that ESC. If I unplug the battery the thing works again. APM works (orientation sensing etc.) when the micro usb is plugged in, suggesting there isn’t just something very wrong with my Navio+ board.

Thoughts? This is a new ESC. I’m using a 3s lipo because 2s didn’t have enough power to get it off the ground before, but could still keep the Pi powered on and make the blades spin.

do you have a picture of how you have it wired up?

Yeah it’s a mess right now, I took it apart so I could run some tests and see if I could figure out what was wrong. So here these pics are, I’ll upload better ones when I put it back together. I have the Navio board on the bottom so there’s room for my 6045 props to spin. 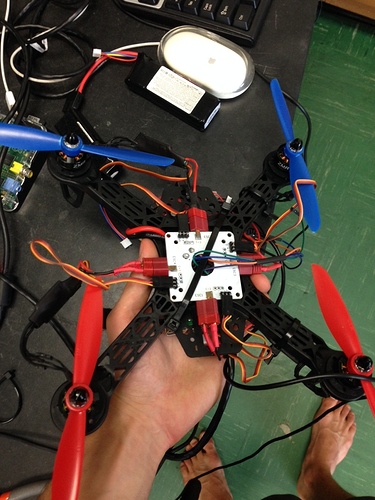 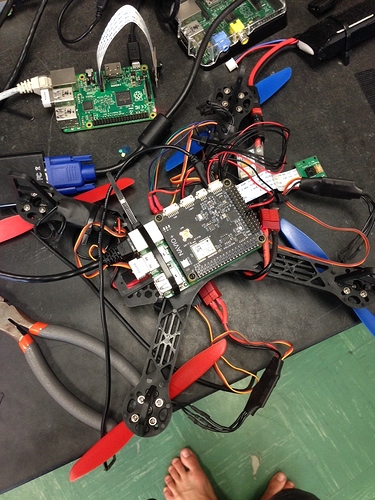 Do you have any spares of the problematic components to switch out and see if you can isolate the problem?

I think you need to plug your esc’s directly into the navio. Not into the PDB. Unless you have some special setup I am not aware of…

Do your esc’s have a bec? if so don’t plug in more than one power lead. cut or remove the others. If you have opto’s just plug um in.

Well that seems to have fixed the crashing problem, now they’re all getting hot but apparently not quite as hot as that one was before. Thank you. That’s embarrassing. I saw that there were things to plug the escs into on the pdb and leads coming off for the signal and power so I just used those instead. Apparently that’s not how it works. Thank you.

As for the bec, yes my escs do have becs. My pdb essentially made it so only one of the esc’s power leads were used, and that was those of the esc that kept overheating. If I cut the power leads so that only one esc has its leads being used, how is that different from using the setup the pdb made, and if it’s the same, wouldn’t it just start crashing again?

Just make sure you only have one 5v+ going to the servo rail from your esc’s, if you have multiple it can cause problems.

I highly suggest you run through the apm copter wiki. All the posts related to the pixhawk are applicable to the navio.