Hi everyone, I have two reach RS2 units, one for base and the other working as a rover. I just wanted to check that I have the optimum settings for range. I’m in Australia, very flat terrain at my location, but we do have timbered country. From the base, using the existing lora antennas, I’d be lucky to get 3km range. I have my own loraWan network and build my own sensors etc, and have acheived better range using a higher db antenna mounted vertically. Here are my settings… 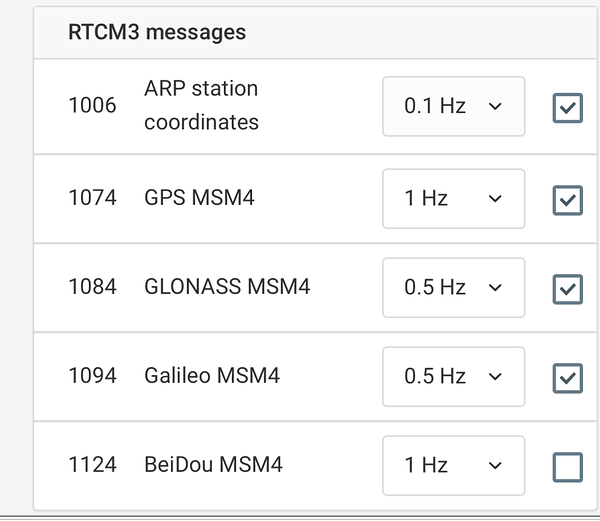 GNSS select settings (not sure if this matters or not)… 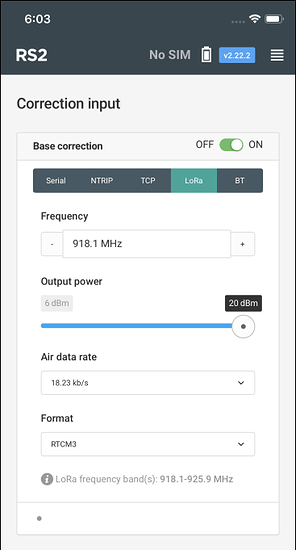 Are there any settings I’ve missed?
Thanks in advance, Andrew.

Great stuff! As a general rule of thumb with a LoRa radio a higher frequency will throw further while a lower frequency penetrates better.

Ok, thanks for that info, I also read that the lower the Air data rate the better the range, and I was on the highest setting, so I have taken it down as low as available.
I’m a bit doubtful whether moving the frequency to start at say 923 would make that much difference…happy to be corrected on that though.

I’d also recommend taking a look at our guide on tuning LoRa.

I wasn’t saying that anything you did was incorrect, just providing a tip. You were at 918 MHz so you were more than halfway up the scale so you are correct that moving from 918 MHz to 923 MHz may not be a huge difference, but as it was a tip for others that may read this thread running 923 MHz versus the 902 MHz that the receivers come set on will.

When we in surveying or construction really want to get into deep cover we run 450 MHz receivers so yes, 20 MHz is a small change in the grand scheme of things, but it can also be a difference maker at 2 MHz. You might also tinker with the radio output power. I have actually gotten better signal in certain situations by lowering it by a mere 2db. I don’t know why it made a difference, but it did. The laws of physics dictate that in order to transmit over a longer distance, you either need to increase the power or reduce the bandwidth which you have done.

Also, keep an eye on the GLONASS. I have been seeing more and more reports that it has been having problems maintaining good SnR’s and coverage. If I have areas that I know this is the case I will remove GLONASS and supplement with Beidou. This is a perfect example of why people should log while they are RTK surveying. Especially if you do work collecting allot of data.

Once again, great work! I am sure many others will benefit from it.

Thanks, I’ll definitely read carefully and try the settings.

Thanks very much for the explanation Michael, it’s really helpful. I’ll have a play with the frequency, I left it at the default setting, I actually thought it started at 915 (or thereabouts), I’ll take it down as far as I can legally go (not sure I have any available outside my legal frequency anyway), and see how it goes.
Thanks for the help!

Just like to add Fresnel zone. To better understand whats going on with high/low bandwidth

Environmental factors can have a drastic effect on range, making it one of the key aspects to understand when deploying a radio frequency (RF) solution.

Interesting. This seems to contradict my field experience. We have both 450 Mhz and 915 Mhz Topcon Hiper V receivers and through personal testing I find that running 16W the 450 on average will throw 1.5 miles whereas the 915 is at about 2.5 miles. This document seems to claim the opposite should be true.

That said, I had to look up what this was and found what seems to be a pretty good resource.

The graphic is a little confusing as it seems to be referencing some sort of propagation of the signal off of the direct line of sight transmission? Not the distance of the line of sight distance itself whereas the document your provided has another graphic of the donut…

Not sure how surroundings are at these locations but i would suspect fresnel has something to do with it. If not, different antenna could perform very different. Like LoRa on RS vs RS2.

E.g
If base and rover are raised 3m of the ground and the distance between them are 200m with 915Mhz, you would have hit the max distance to be within the 60% of no obstacle radius. That would be the recommende distance before loosing performance.
For 450Mhz you would hit 60% of no obstacle radius at 100m.
So, even though low Hz travels further in an open area, fresnel might mess things up and higher Hz would outperform in such condition where obstacles near the zone would make a difference

These are teoretical numbers but should put things into perspective