Setting up base over benchmark

I am using two Emlid reaches as base and rover and setting up my base over a benchmark (see NGS datasheet)NGS_datasheet.pdf (80.9 KB)

I am leaving the Base coordinates as manual but am having trouble figuring out what coordinates to put in. Online it says coordinate has to be supplied in ECEF XYZ or in WGS84 but the NGS datasheet has it in NAD 83. Would this be the correct coordinate to enter: 1489.19166667, 1509.33111111, -32.143. I used an online converter to convert the decimal degrees listed on the NGS datasheet.

The Cartesian coordinates are on the datasheet, but I don’t know if Emlid expects the ECEF conversion from WGS84?

I am not experienced with NAD83 vs WGS84 Lat/Lon, but from my understanding they are pretty much the same. There may be certain areas where shifts have to be factored in, but I just tried to convert your coords and they were the same to the 10-thousandth of a second.

You converted my NAD83 coords to WGS84 and they were the same to 10-thousandth of a second? 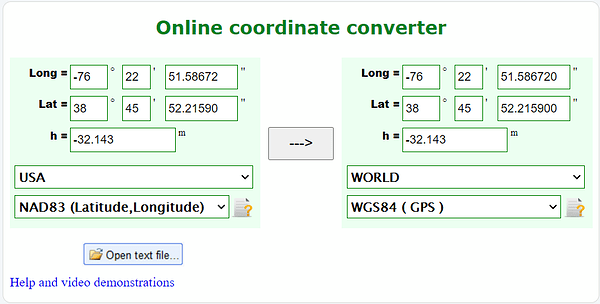 I would expect a small translation difference between WGS84 and NAD83, not sure that converter is giving accurate results. On the other hand, if you are going to be needing NAD83 coordinates for the collected points, (eg. if you’re using a State Plane coordinate system which is based on NAD83) I would manually enter the NAD83 coordinates given for the monument so that your results will line up with the local SP system without additional conversion.

Could you provide some documentation as to why you think there’s a shift? I’ve always thought the same thing, but everything that I’m finding says that any differences are sub millimeter. The main differences will reside in what vertical datum is used.

WGS84 and NAD83 are currently different by about a meter or two depending on where you are.

It will provide a “survey” quality position conversion. The Online Coordinate Converter mentioned seems to be a coarse “mapping-grade” tool.

But, back to the orginal question. Just enter the base coordinates in NAD83 and that’s what you’ll get from the rover. No need to convert to WGS84 unless you want WGS84.

Yes, the software will assume you have WGS84 coordinates and a small error will be introduced, but it’s tiny. On the order of millimeters for a 100 km baseline.

There are thousands of CORS stations out there with published coordinates and anyone can test this themselves if they want.

Thanks for the clarification. I never got the same values in the field when comparing to NAD83 benchmarks so I thought it wasn’t the same, but like you said it depends where you are so maybe some of the other sources were right for their area. I think the converter I found just flat out isn’t working. Even if it was just GIS grade you would have differences by the 2nd digit of a second.

Yes, the software will assume you have WGS84 coordinates and a small error will be introduced, but it’s tiny. On the order of millimeters for a 100 km baseline.

…and maybe this is what I misunderstood. So are you saying that if the same set of points were shot with each coordinate system that their relative accuracy would be the same? I don’t understand how this could be if there are varying differences up to a meter across various areas?

The main point of even talking about WGS84 was to hopefully hear what ECEF coordinates Reachview really wanted when having to convert since the two don’t originate from the same point. Did you look at the document that was provided? Can you answer the question?

The difference of a meter or two between NAD83 and WGS84 is over a continent (we are talking horizontal here). It changes very slowly unless you are in earthquake areas meaning plate boundary areas. For the vertical it’s more complicated as we have ellipsoid vs orthometric heights (which I think you are bring in here) and in general much higher variability with orthometric heights. It depends on what you are after.

The important part here is time can really matter for high accuracy. If you have a specific pointer to documentation I’ll check it out. I must be missing it in this thread.

It seems there is a difference between coordinate conversion and coordinate transformations. For conversions, the difference between WGS84 and NAD83 is very small, but WGS84 has a reference based in space which is static, while NAD83 is earth based which has plate movements. The larger differences which require transformation come into play due to the movement of tectonic plates, there are regional velocity factors to account for movement over time with differing epochs. so WGS84 and NAD83 are diverging over time.
To make a correct transformation you would need to account for the differences in time when the measurements were made. That point was last established 8 years ago, and I would expect that if you were to reestablish it using OPUS for example, you would find it had moved slightly in the NAD83 system from the published coordinates. But if you want to measure relative to other features that have been mapped locally, it would seem best to use the coordinates given as the reference point.
This document seems helpful. https://www.ngs.noaa.gov/CORS/Articles/WGS84NAD83.pdf

The larger differences which require transformation

…and going from Geodetic to Local Cartesian which is what we have to do most of the time. Especially with localization and leveled benchmarks.

Just to clarify since I am doing fieldwork this week- I should provide the WGS coordinates from the NGS datasheet to the manual base mode. See instructions from Emlid here

Just enter the base coordinates in NAD83 and that’s what you’ll get from the rover. No need to convert to WGS84 unless you want WGS84.

I should enter the base coordinates in NAD83 with ECEF XYZ format?

I should enter the base coordinates in NAD83 with ECEF XYZ format?

No, the LLH coordinates. Just don’t transform them to WGS84, enter them as they appear (NAD83) on the benchmark datasheet. The rover will give you a relative position, so it will be correctly in NAD83 already.

Yes, this should do the trick.

You can check out this Tatiana’s answer regarding the ETRS89 and WGS84 conversion that describes in more detail why it’s possible to only specify the base’s coordinates in required system:

Hey there, I’d like to clarify some points regarding conversion ETRS89 data to WGS84. Both RTKLib and ReachView calculate a rover’s position relying on a base’s coordinates. Basically, the rover knows the centimeter-accurate distance to the base while it’s maintaining the fixed solution. If the base position is shifted on some offset from the real point on Earth, all rover’s coordinates will be shifted on the same offset too. That means that if the base’s position is specified in WGS84, all t…