Hi everyone, I have

I’m doing some testing on RS2 and Ntrip with RTK, but I would like to have my own base to test RTK at shorter distances (my closest Ntrip base is 53km away).

Can I use the M+ to transmit corrections to RS2 through the rfd900 radio? I have searched on the forum, but it is still not clear to me.

Reach RS2 is a multi-band receiver, so it needs multi-band base corrections to calculate coordinates with centimeter accuracy. Reach M+ is single-band, so you can’t use it as a base for Reach RS2. You may use the Reach M2 with Reach RS2 or Reach M+ with Reach RS+ instead.

In case you attach a pair of equal external radios to the units, Reach can use them to transmit corrections. You can check the sketch to learn how to connect RFD900 to Reach M+. To attach RFD900 to Reach RS2 RS232 port, you need to connect 5V to 5V, TX to RX, RX to TX, and GND to GND.

Thanks @kseniia.suzdaltseva, it seems that I can’t do RTK with the stuff I already have.

Hi @kseniia.suzdaltseva, If I have 2 RFD900 radios, I understand that I can use M+ (single-band) as Base to transmit RTK corrections to an RS2 (multi-band) as Rover. I will get corrections although it would not be optimal, is that right? I want to run some tests in a place with open skyes and max distance between base/rover will be 300/400m.

And if so, is this connection diagram correct? 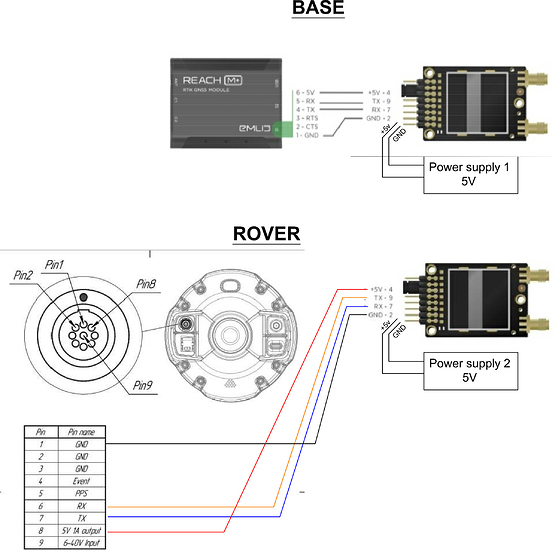 Hi @kseniia.suzdaltseva, forget about my previous post, I just read about Emlid Caster beta and I’m going to give it a try.

I would comment on the setup as it could be useful for other users.

Power supply 1 is connected to RFD900 and M+ gets power from RFD900, is that correct?

A power source should power both M+ and RFD900. Please note that RFD900 can consume up to 800ma in peaks, so ensure that your power source can provide enough power for both Reach and RFD900.

Power supply 2 is needed? Or RS2 gives power to RFD900 and so it is not needed?

The Pin8 provides 5V output. So, Reach RS2 will power the external radio, and you don’t need the second power supply.

I just read about Emlid Caster beta and I’m going to give it a try.

Great to hear that