I saw some posts about RTK module and antenna connection in cell phones and I was curious.
Has anyone out there assembled something?
I thought about building some device that provides Ntrip correction on my cell phone.
I think connecting an M2 and a Multi-band GNSS antenna would do the trick.

Does anyone have a suggestion?

I’m curious about that too, as I’ve not seen anything similar made by someone single-handedly. Many people love creating custom devices at home, so I wouldn’t be surprised

. Still, it seems too tricky to do this using a standard smartphone. It requires not only to change the hardware components but to code it to communicate with the smartphone’s OS properly.

This idea pops up on here from time to time.

In order to have RTK part of the needed system is embedded at the hardware level, so sending RTK corrections into your phones gps will not work, currently no cell manufacturer has RTK gps.
If you have certain android phones you can desolder the gps chip and replace it with this kit.

Using the Emlid with Reachview3 lets you see and record rtk position of the antenna on your phone, this exists and works well.

Using your phone as a modem to pass Ntrip information to M2/RS2 is already handled by Reachview as well.

Hello how are you?

I got a satisfactory result on a test.
I have an M2 connected to a BT-200 antenna, which I use as a fixed base for Ntrip.

Out of curiosity, I did a lot of research and managed to get M2 corrections via bluetooth, by NMEA to my cell phone.

And even more satisfying, I was able to receive RTK fixes using the QField APP (QGis for Android).
I was very happy.

Now I’m thinking about building a prototype device for field surveys with the cell phone.
Survey of the cadastral type.

For this, I think about using:
One M2;
One GNSS Emlid antenna;
A power bank as an energy source.

Maybe the prototype evolves and may become something like this Pix4D device: 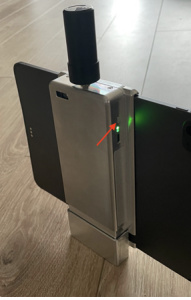 Now I’m thinking about building a prototype device for field surveys with the cell phone.
Survey of the cadastral type.

For this, I think about using:
One M2;
One GNSS Emlid antenna;
A power bank as an energy source.

Looks like this should work out. Have you figured out how you’re going to place the Reach M2 antenna? I see that the antenna in the photo is attached to the phone’s case. Do you plan to have something like this too?

Hello, @liudmila.slepova ello, @
How are you?

Liudmila is now on vacation

So I’m going to chime in here.

Your idea sounds really fun! To get the RTK calculated on the phone - that would be awesome and no doubt would increase the cost of the gadgets

As both @PotatoFarmer and Liuda mentioned, for now, there’s almost no way around it. It’s a bit scary to think about resoldering the components on the phone’s PC boards

The vibe I’m getting now is that you’re creating the case which will include the M2 attached to the phone. That’s a working way: you get the position from the receiver while it gets the corrections from the close NTRIP stations. That’s how we recommend working with apps that require the position from Reach: here’s the guide about it.

I think it’s a cool idea to bring it all together! Still, there are many details to think over. For example, Reach M2, while closed up with the battery without ventilation, can get rather hot. So I’d go with the design that takes it into consideration

Right.
I’m still thinking and projecting in my head how I’m going to do this.
But I’m going to make a prototype to test.

Thanks for the warm up tip.

I hope she will, thank you

Be sure to share your ideas with us, then!

maybe something similar, interesting though

This idea came to my head also, and I’m interested in building this kind of rtk mobile system.

But in my case I’d like to make it for iPhone.

I’ve tried iphone’s lidar and the only thing is acurancy… Which seems to be solved with vidoc rtk!!! So… Let’s try to make one!

If anyone knows how is vidoc build?