Hi there… I’ve got the problem with communication between base and rover over the RFD 868+ radio modem. Both modems were configured with RFD900 Tools to have the same configuration. The configuration is attached to this message. 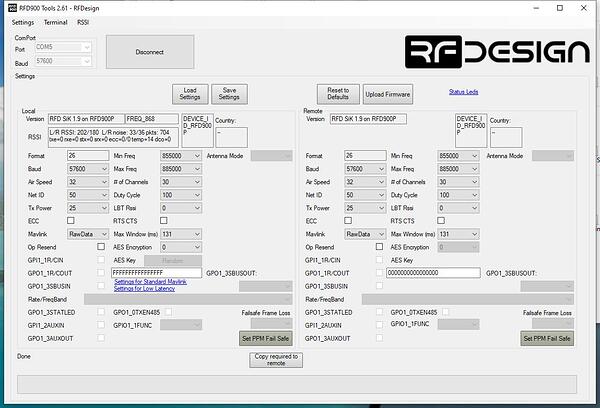 The BASE is connected to the USB OTG port with the 57600 speed. The BASE has been setup according to the manual for LORA setup. The ROVER is connceted for the correction input trough the RS232 port with the same speed 57600. Both radios have green LED turnd ON while the RED is bliking in the regular timing (1 sec). But my Serial is “Waiting for corrections” forever. Where can be the problem. I would say that corrections are being send properly just by observing the LED status on both RFD radios, is it right? Both RTCM’s have been set to RTCM3.02.

I’m sure we’ll figure out the reason, but I want to make sure that everything is configured properly.

The BASE has been setup according to the manual for LORA setup.

I assume that the root is hidden somewhere here. For LoRa setup, it outputs corrections via LoRa. But in this setup, your base should be configured as outputting corrections via Serial with corresponding 57600 baud rate. 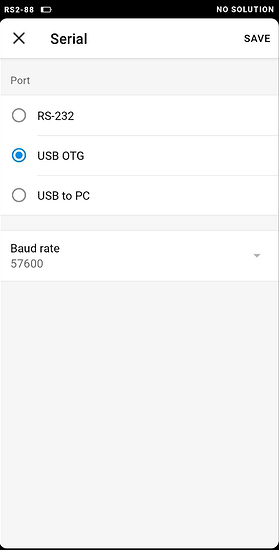 Please try to connect them to the one port type and send corrections via this Serial port on the base.

Hi Kirill
The Base and Rover have different connection type synce the Rover in the final design shell be the MBES on the boat that is using Trimble INS. I have tried first to use EU version of the radios and it didn’t work at all. The Base was originally connected to the USB OTG but with those radios there was no TX Led visible so I have decided to connect it to the LEMO RS232 connector with the original Emlid cable. I’ve used PIN2 for GND, PIN8 for power supply and PINS 6 and 7 for RX/TX. Since the green LED was solid (after turning the Rover on) and RED started blinking in the second interval I assumed that base is in the proper TX mode transmiting the RTCM3.02 message as I did setup.
Later I have started my ROVER with the radio connected to the USB OTG port and the Green LED was solid enlighted while the RED was blinking in the 1 second interval the same as Base… Was it right? Is it TX LED or it works as RX as well?

Sorry for the delay here.

I’ve found in RFD manual that red LED may indicate some issues with firmware. For example, solid red LED means that modem is in bootloader mode.

Is it possible to test connection between modems without Reach receivers? It may help us understand whether the issue is related to modems themselves or it goes from Reach side.