Hi. I have a new RS2, and yesterday I conducted some tests with Ntrip corrections. I had good results for first test and not so much for the second test.

Test 2. Survey on a random point where I live, 53km from the nearest permanent station. During the test changed to a 86km permanent station to see what happened. Took the first point record for comparison. 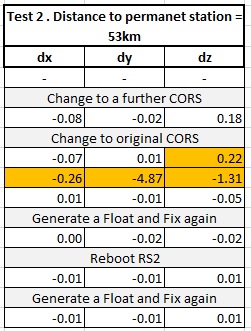 Some strange results, getting one fix that has 4.87m horizontal and 1.31m vertical difference from the others! obviously that is not a valid point, but it was Fix.

Conclusion: The test 1 was good, 6km from the base and all coordinates almost the same. Test 2 was at a larger distance from base and has one Fixed point with BIG differences.

Is there a way to improve this, or to know when I have a “false Fix”? I’m doing tests for now, but for the real world I need to trust 100% in the GPS. I´m evaluating this RS2 because I would like to get another one, but I’m not sure.

This happened 53km from the base anyway. For real surveying I’ll be working no more than 10km, but I would like not having “Fix” when it’s not.

I think pushing Ntrip to 50 km is pushing capability of GPS technology.

I know. That is the distance from where I live to the nearest permanent station, that’s why I travelled to do the test 1 near from the Base with good results.

What I mean is, that point with big difference (4.87m horizontal and 1.31m vertical), shouldn’t have been Float instead of Fix?

I don’t mean if it’s Float (so far away or wathever reason) because I will not record it. The problem is when it’s Fix and a I take it as a valid point when it´s not.

I am not sure what settings were used in the NTRIP results but in some post processing software, there is a setting where you set the error circle/std. Anything below this threshold would be computed as acceptable to the user. Anything above this threshold would be returned as an error and rejected. In one of those settings, I remember that you could set it as a PPM (parts/million). That setting alone could result in large deviations depending on the distance of point from control station. I would look into those settings if these are accessible to the end user.

May I ask you to share the data recorded during this test with us? They will be of great help.

This guide explains how to get these files.

I deleted the files, since I had a lot of them in the memory (1GB) trying different things with the RS2.

The only one I have is a UBX from the Test 1 that I downloaded that day, but from Test 2 the only I have is the points recorded with Survey Master where it can be seen a point far from the others. 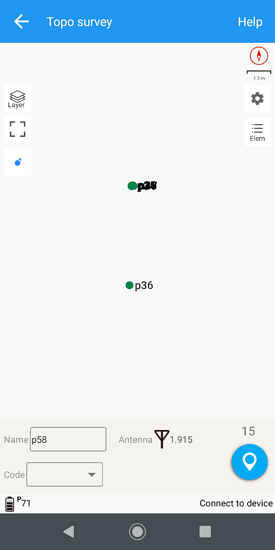 I can repeat the Test 2 in the same point and see what happens.

It’d be nice if you’ll be able to repeat the test and share the results with us. Raw data logs will be of great help here as well.

I performed another test on the same point. I took the first coordinates from the other day to compare. This time the differences were few cms! 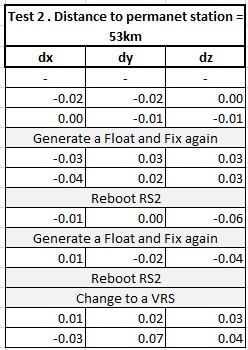 Something strange is that I was using the nearest permanent station available (53km) with Ntrip, and I had 15 satelittes on the Base. Then I change to a VRS of the same caster and the satellites on Base dropped to 6.

With VRS from same caster

Is that normal? And in that case, is more convenient to use the 53km permanent station or the VRS with less satelittes?

Something strange is that I was using the nearest permanent station available (53km) with Ntrip, and I had 15 satelittes on the Base. Then I change to a VRS of the same caster and the satellites on Base dropped to 6.

Could you share UBX data and RTCM3 correction files recorded on the device during your tests with different bases? I’d like to check the logs.

I’m out of the city now. I’ll send you the files in the next days.

Sent you the files by PM.

Sorry it took so long to get back to you!

Does this number of satellites retain constant? Do you always get the 6 satellites from the VRS station?

It’s possible that it’s caused by the current sky geometry and the algorithms used to calculate this VRS position. Anyway, as long as you have a fixed solution, there should be no issues with that.

Sorry for the late response. When I changed to VRS station I always got less satellites than with the single permanent station, in the same place with the rover.

Maybe it’s related to the algorithms used to calculate the VRS position. Anyway I couldn’t perform new tests, and I see that there is a new firmware version, so I think I’ll try that and see what happens.

I performed another test. I have some points wich coordinates were given with total station and I surveyed that points with the RS2, using a VRS Ntrip correction.

First all was OK, the difference between total station and RS2 being 1-2cm. After some time, 1 hour perhaps, I wanted to give coordinates to some more points, but couldn’t connect to de Ntrip Caster. After several tries, and putting out and inserting the SIM card again, I could connect to the Ntrip caster but it was difficult to get Fix, and wen it got Fix, the same points surveyed that before had 1-2cm difference with the total station now had 1.50m difference! 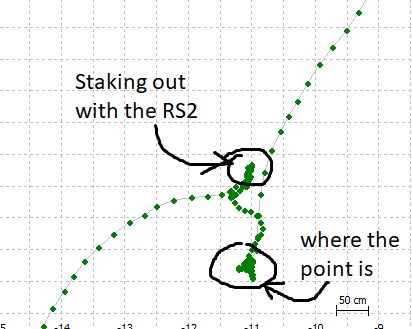 I tried restarting the RS2 and changing VRS mount point (there are 2 that I can use in my location). When it got fixed this time, the points were again about 2cm difference, wich is OK, but I would like to know why the previous “Fixes” had such difference as 1.50m. I was in an open space with no obstacles near.

What I think that can be the problem:

-The ntrip correction
-The RS2
-The internet connection from the SIM card. (this is the less probable, because if there is no connection the solution would be “Single” instead of a false fix)

Any ideas? I would to like to figure it out because I still can’t trust 100% in the RS2 for surveying with VRS Ntrip.

Thanks for the tests!

I’ll check your logs and write you back.

An update on this, looking closer at the log (solution.LLH from 202005201547 log), I realized that at 15:52:48, while being in FIX, there was a jump of 1.70m aproximately in South direction (I did not move that distance), that was close to the difference I had with the known point.

Here is the jump in the “Ground Track” 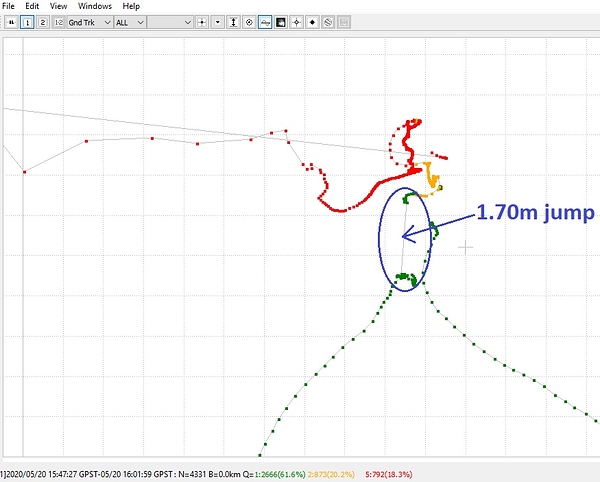 And here in the “Position” 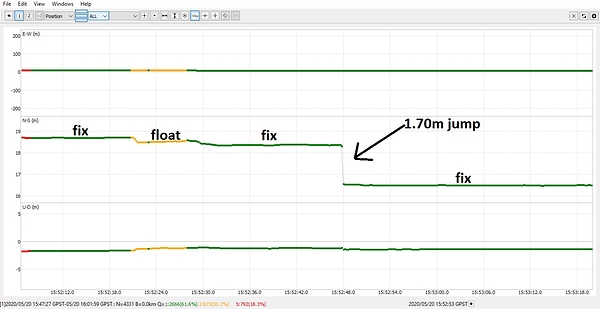 I realized that jump because doing PPK between the Obs file from the Rover and a permanent station, it can be seen a continuous, while RTK has the jump causing that “offset” 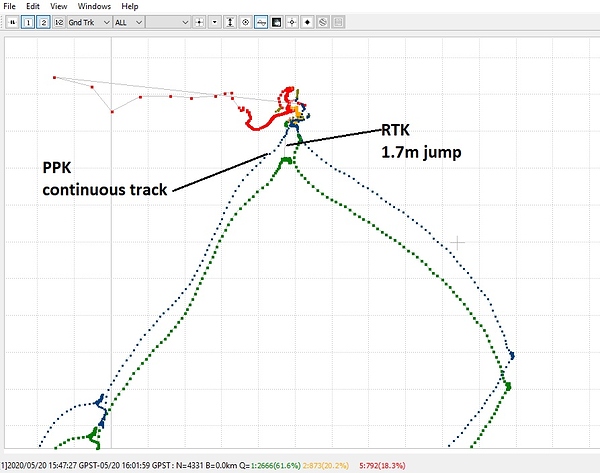 On the “Sat vis” on the rover log, I don´t see anything strange on that sector 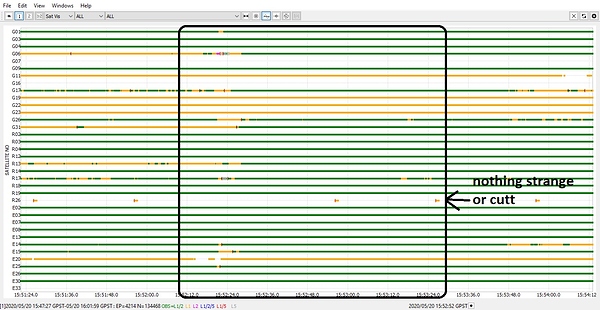 But there was a jump in the Age of differential some time before, at 15:52:00 aproximately 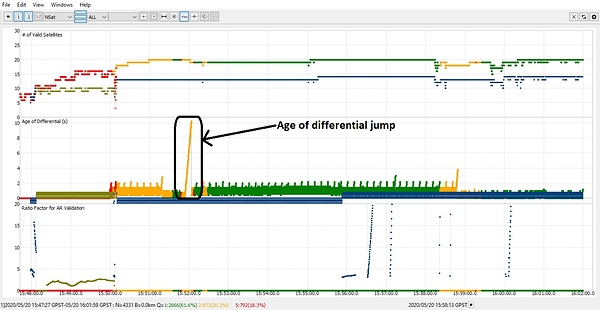 Could that be the cause? And if so, is it related to the connection with the Ntrip server?

I always can do PPK to confirm the recorded points, but would be great to trust RTK, and I was thinking for example on some kind of warning when there is such a jump on the Age of differential while in RTK. In this case the jump had a duration of almost 6 seconds but I didn´t realized when it happened. 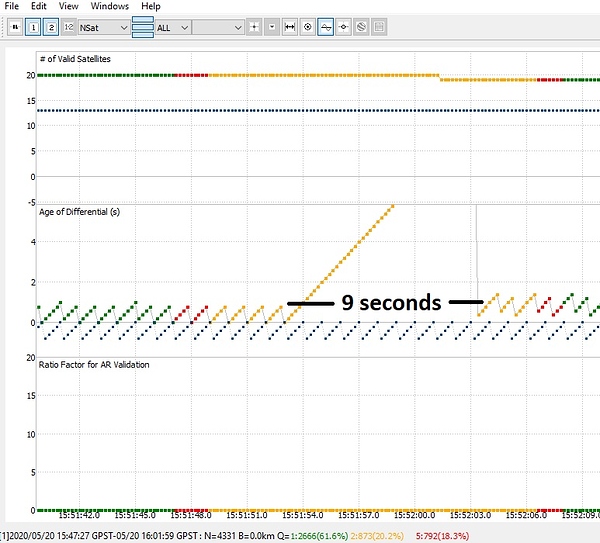 I would like your opinion and if you have any recommendation to improve the RTK workflow.

Thank you for the update! These jumps aren’t natural for Reach’s RTK performance. Unfortunately, I can’t suggest anything right now since we need to investigate this behavior.

However, it’d be of great help if you could conduct one more test and record logs for 15-20 minutes with the Raw data debug option. You can enable this option in the ReachView Settings tab.

Also, did I get correctly that you connected to the same NTRIP station 53 km away? May I ask you to provide me with its coordinates so that I can post-process the data myself?

Can you add journals from the base or the „Sat vis” of the base? 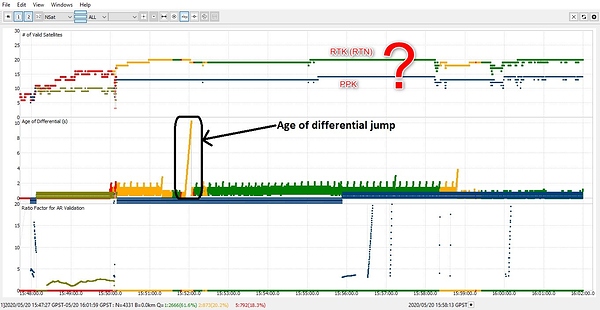 Ok, the next time I use the RS2 I’ll enable raw data debug.

Also, did I get correctly that you connected to the same NTRIP station 53 km away? May I ask you to provide me with its coordinates so that I can post-process the data myself?

I use the 53km Ntrip station to do PPK although I know that is not the best method because of the distance, but did it only to compare with the RTK session and discovered that “jump”.

About the Ntrip correction used on this log, it was a VRS correction, and that 53km station is one of the four or five included in the VRS network.

I´m sending you logs by PM.