I have finally managed to get through the start-up section to pair the computer with the Reach RS and now continuing with the documentation. I have reached here https://docs.emlid.com/reachrs/common/reachview/status/. ReachView App/Status/RTK Parameters/Age of Differential.

I don’t understand the word “steam”.
In case of steady correction steam age of differential will indicate link latency.

An example to illustrate how the age is derived will be very helpful.

It is a typo in the docs (@dmitriy.ershov)

In [the] case of [a] steady correction steam stream[,] age of differential will indicate link latency. [It is] Calculated by subtracting [the] time when the correction message has been generated from the current receiver time. It is an invaluable tool to debug connectivity issues.

When you have a steady stream of corrections flowing in, then the age of differential figure can be assumed to be equal to the link latency of your connection.

I was practising on a dummy project and then tried to save to .DXF. My anti-virus sounded a Security Alert.
Screenshot 1: 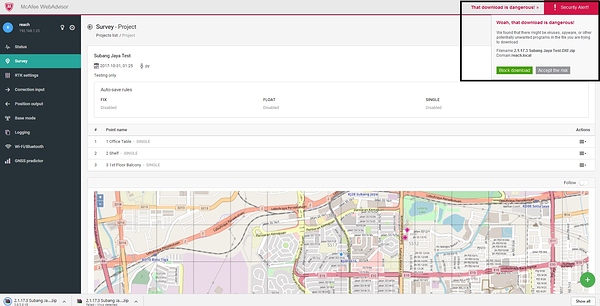 Has this happened to anyone else?

RTK settings: Positioning mode.
Is it appropriate to set the Reach RS Base unit at Static mode to speed up the resolution of ambiguities and produce higher precision in measurements?

but Beidou is frozen. Cannot access. How do we open it for selection?

@bide, tx. Your explanation is very clear and should be used in the documentation to replace the existing words.

Is it appropriate to set the Reach RS Base unit at Static mode to speed up the resolution of ambiguities and produce higher precision in measurements?

Each Reach unit can operate a base and a rover at the same time. The setting you are asking about is applicable to the function of a rover. You can ignore it when using Reach as a base.

When I use a Reach unit as a base, I typically set the *positioning mode* to **single** and only enable the raw (UBX) log. Doing that provides a reminder that there is no intention for this unit to be operating as a rover doing RTK work.

Note that there are other scenarios where one may want their base to be operating simultaneously as a base and a rover. For that you would make different choices in your settings.