We are rolling out a new update, and the main new feature is long overdue. So far the Reach devices haven’t been taking full advantage of their in-built LEDs, only using them during the startup process. This new ReachView version fixes this, breathing life into the RGB LED on Reach and the LED panel on Reach RS. The update contains mostly “under the hood” changes, we had to go through a lot architecture-wise to make this as straightforward as possible. Reach team has been working very hard on this one, so shout-out to our engineers

While reworking the LED we’ve introduced some changes to how things are presented. Full information on the new LED statuses is available in our updated docs(Reach, Reach RS). Here’s a little summary:

This explains the PWR and NET LEDs:

Hit the lightbulb for some stroboscope action:

You can toggle the Night mode inside the settings tab: 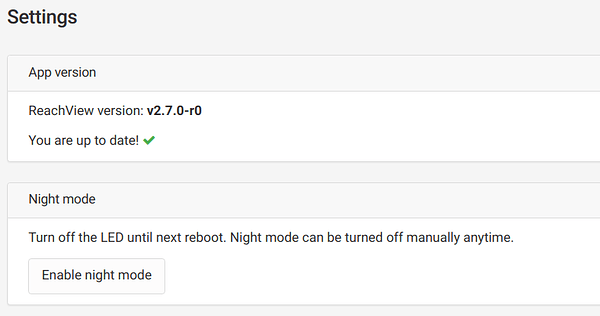 A big thanks to all you guys for feedback and reports, especially the ones who participated in remote debug sessions, giving us a chance to fix problems for everybody. This update has been cooking up for a long time, and we’ve got some more improvements lined up for you, so you might expect a couple more releases in the near future.

We’ve just released v2.7.1. This update addresses instabilities some of our users faced using LoRa on Reach RS. The driver behaves much more stably now, average age of differential is significantly reduced and under normal circumstances should be less than 1 second. Thanks to all the users, who reported this!

Another minor release, v2.7.2 is out. It is mostly RTKLIB-related and includes:

No need for duct tape anymore

Not sure when it disappeared, but in survey mode, antenna height can not be set with 3 decimals, only 2.

Yes, I had same issue and also decimal can’t be used in iPhone too. Should make this field entry things more complete.Thanks.

Please add “Restart and shut down buttons” in next release… Thank you.

Confirmed, will get it back soon.

BTW - You guys are doing a great job with software updates and the website. - Thanks

Hi Guys, Noticed 2.7.3 is out, can you advise what the changes are?

I do not see any comits on https://github.com/emlid/RTKLIB/commits/reach
Did you forget to push, or did the fixes only affect the closed-source part of Reach ?