Why my rover die alone

Why my rover die alone

Maybe it wanted to be promiscuous instead of marry?

Yesterday I did two simultaneous tests with EMLID v2.17 and Promark 3. In EMLID I had only 3 green bars and a very high PDOP in the fieldgenius 10 trial version and in the Promark 3 I had PDOP less than 2 While in the moment that the PDOP indication in fieldgenius worked it started in 3.1 until it reached 13 and the Promark 3 only indicated 1.8 of PDOP with only GPS constellation. In the application of my IPhone 7 the indications are fixed but only three bars of satellites in green, the PDOP indication could be included to the next versions. I do not know what will be happening with EMLID and fieldgenius with these PDOP variations high or does it indicate zero?

v2.17.2 has been pushed, fixing the correction input issue!

v2.17.3 has been pushed, fixing an issue with dropdown bars getting stuck on mobile devices.

Versions 2.17.2 and 2.173 are not stable. The iterative process of convergence (initialization) has been completely downgraded - it lasts for a dozen or so minutes while in version 2.16.0 it is two or three minutes. I am talking about using NTRIP casters for RTK, i.e. Reach as ‘rover’ only.
Is it possible to return to the initialization module such as in version 2.16.0 or 2.16.2, possibly entering the stable version 2.17.4?
Is it really like here?:
“… the dev updates will not revert.ReachView version back to stable. You will be prompted to update to the next stable version as soon as it is released.”

RTK engine was not affected by this update. Would be great if you could share solution logs recorded on v2.17.3 and v2.16.2 showing the behavior you described.

I do not know what happened. ‘Simple system report’ is too simple. And a few days ago they were complete. I can send full reports but not through this thread (too sensitive)…

You can send it to support@emlid.com or via PM here.

Full reports have been sent.

Hi, are you sure this is related to the update?
Could you describe setting used on Lora (base setting and Hz) and distance between rover/base used?

Distance between rover/base is around 40 meters

And RTK setting on rover?

I’ve made a test and can’t confirm this issue.
I can assume that you might have the wrong settings or bad environmental conditions.

Can you share your raw logs and full system report, please? 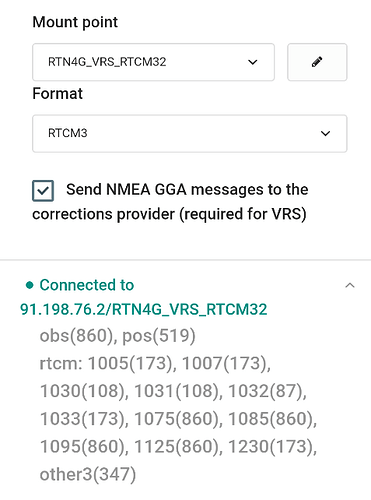 I already downgraded to v2.16.0. Will do test today if the problem persist. Maybe my lora is broken.

If age of differential is increasing, then compensate by one of the following:

I’ve tried to reproduce your issue without success.
My steps:

I got fix status in around 2 min on both devices with not the best possible NTRIP caster and satellite view.

This version is not stable. The bug is probably in the beginning. Version 2.16.0 always starts initialization with GPS + GLONASS and version 2.17.3 does not include GLONASS at the beginning, although it is ON.
This is clearly visible in the logs.

In the solution file during some test I can see the same behavior but with 2.16.2.
As we didn’t change anything in RTK engine, I can assume that it’s mostly connected with NTRIP caster and not ReachView version. However, I’ll look into it.

Thanks for your tests and time