I am not to impressed with the battery on the RS2, mine discharges quickly and never reaches a full LED charge status still blinks no matter how long and no matter what charger you use and I am using one that is capable of full voltage and amps.

Do these have some sort of smart discharge as mine was fully charged and took it out a month later after sitting in a temp controlled environment with a constant temp of 62f and they were completely dead!!!

We are headed to Florida tomorrow and will be able to give them a full test and workout hopefully the batteries last!

That’s why I currently recommend relying on the battery voltage level, not on charge status in the ReachView app.

However, I’d like to ask you to send me the Full System report from the device in PM, so I can check it out to confirm that the battery is indeed fine.

Also, it might be useful to conduct the following test to check if the battery works as expected:

Hi Tatiana, one device shows me the full charge, the other one keeps flashing the light

Thanks for the report!

This is only an indication issue. We’re aware of it and are working on the fix as well.

Same here. Two RS2’s and both are hung on the 4th LED blinking. I haven’t run them continuously for more than 3 or 4 hours, but will bench test them this afternoon.

It’s more likely an indication of the same issue I stated above. I’d recommend keeping the unit on charge for at least 9 hours and then checking how long it will work to exclude a possibility there might be a hardware malfunction.

You can also share with us a Full System report over support@emlid.com after this test so that we can look into it and confirm everything works correctly.

Once we have any news on this indication issue, I’ll be here with an update.

It seems we’ve already released this fix in v2.22.5 version, so it’d be nice if you have a chance to check if it works as expected.

Hi Tatiana! With version 2.22.5 the battery charging gold continues. The last led continues to flash after 10 hours of charging

Same here. I was able to run a continues 12 hours with no issue, but the receivers still don’t report a full charge.

Do you mean that the last LED keeps blinking? For how long? Could you please send us a full system report after you see this behavior?

Correct. Use took it down to 2 LEDs and recharge overnight still left the 5th LED blinking. I am recharging now and will collect the report once the 5th LED lights and has been blinking for an hour.

Thanks for the system reports! We’ll look into them to understand the issues.

I’ve deleted your posts with reports as they can contain sensitive information.

I’ve got similar issue with my brand new RS2.
On it’s first day after unpacking I couldn’t get it fully charged, last LED kept flashing (even when charging overnight), reachview reported 90%. First I didn’t pay attention, but since I found a couple of thread here, I’ld like to add my experiences.

Today, I just powered up the device and I cannot charge it above the reported 93% (It’s on the charger for 1h, but since the Current is 0A, I guess it won’t charge further. 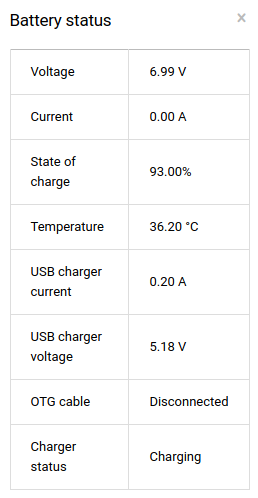 It looks like the device now stops charging at 7V / 93%, when I unplug the charger for a while, and replug later, I see it charging with 0.9A an suddenly drops to 0A but still reporting 93%. (all room temperature)

I think I am the first person that reported this kind of issue on this platform. I can make 5 admissions.

Update: 4h later, figures are the same, only device-temperature went up to 41.2°C, but still 93%.
Meanwhile we know the % in reachview is not accurate, but does it also affect the leds of the RS2?

May I ask you to share Full System Reports on your Reach RS2 units with me in PM? It’d help us see the cause of the issues.

I just wanted to give you an update on this.

We’re still working on fixing the charge status issues on Reach RS2. I’ll reach out once the solution is released.

It seems that there is still an issue with the charge status on my RS2 before updating to 2.24.0 the status was showing 90% after the update it shows 65% its been on charge for 12 hours at 3A I have sent the logs to support@emlid.com 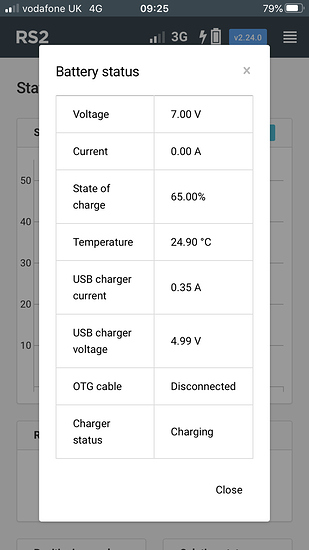 It seems like we’ve been in touch over email. Did you have a chance to run the full battery life test? We need it to ensure that there are no issues with the battery charge and check that the values you see are an indication issue.

For the test, please, do the following:

This way, I’ll see how much time the receiver can work on one charge.