I’m trying to get a picture of the inter-operability potential of using the Reach RS2 as a base for other third party receiver makes, and am therefore asking if folks can please add to this thread with their experience using other 3rd party make rovers.

As far as I’m aware older GPS+GLO L1/L2 only receivers which are restricted to RTCM 3.1 message types won’t currently work with the RS2 acting as a base, as they lack the ability to decode any of the more “modern” MSM type messages.

Here are some of my tests so far (and where I think the issues lie):

Please add to the list with your own rover tests.

I’d also recommend reaching out to these receivers manufacturers’ support to check if they plan to update the software with newer standards as these messages are obsolete.

As your no doubt aware the RTCM3.x standard is additive/incremental, adding new message types, but the original message types are not lost or deprecated, so it’s not quite accurate to describe them as “obsolete”. I guess that’s why an RS2 will happily accept 1004/1012 correction on input…

On an existing GPS+GLO L1/L2 receiver, there’s practically zero reason for a manufacturer to re-engineer their firmware to support “future” message types when the existing 1004/1012 MTs serve perfectly adequately and there’s no need to for the additional facility contained in MSM family of message types, as they can only process GPS and GLO.

That’s why other receiver manufacturers will typically allow a selection of which MSM output messages are streamed eg. MSM4, MSM5 or MSM7 typically. I’ve tried testing with some slightly more modern Trimble AG series receivers and they only work with the more “complete” MSM7 message types.

There in lies the compatibility quandary.

Thanks for this very valuable thread. I’ll share anything I learn on here.

Below are the supported message types on ZED-F9P. Would’ve thought output could be set to either MSM4 or MSM7 quite easily via ReachView, moving things a bit further along on the cross-compatibility stakes?

Also I know that Sub-Systems Carrier Corp (the guys behind SNIP) have a means of translating MSM messages to classic extended GPS/GLO 1004/1012 messages too. So that’s possible too. 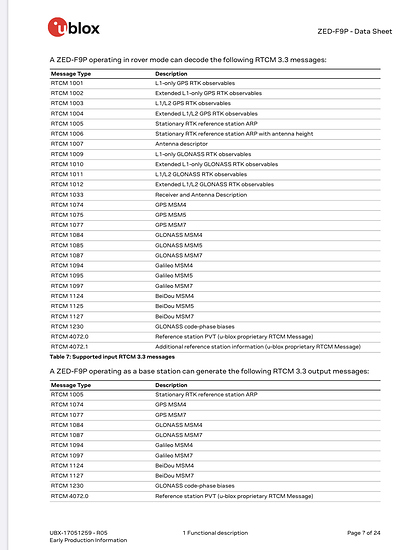 i have some Hemisphere recievers to test as soon as I have time… s321 and R330. I will be testing the RS2 as a Rover with these units though. Will report back.

I think you’ll be pretty safe with the RS2 as a rover.

Okay, I will evaluate as the RS2 as the base… Once I can hook up my external UHF radio via Lemo.