REACH: Power from a car battery

I’m looking to deploy EMLID REACH antennas at static stations on a forthcoming Antarctic project. Basically, the ice on which I’m installing the antenna will move over time, and I’m looking to have the REACH record positions for a period of at least 3 weeks.

Because of this, I need a high capacity power source and something like a car battery springs to mind. I have a regulator - http://uk.rs-online.com/web/p/switching-regulators/6664379/ - to step the voltage down, but I have concerns about the current that will come from the battery. Does anyone have any experience of a similar thing that they could share?

Electrical spepcifications for the Reach module are:

Your switching regulator specifications are:

As I’m sure you are aware, your selection is more than adequate to power a Reach module. In fact it could power 5 Reach modules (5 * 200mA = 1A)

You should not be worried about current flow from the battery. Think of it this way: 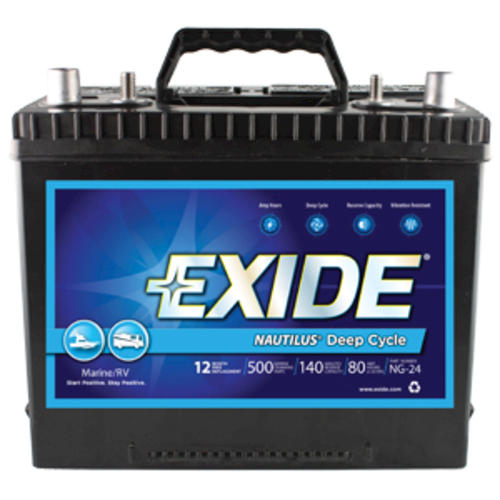 I’m not familiar with what kind of battery is normally used in Antarctic conditions, but after looking at the freeze point of a typical lead-acid battery in cold weather, it doesn’t look good. For example, at -40C you can discharge a flooded lead-acid battery from 100% down to 65% percent. Any further discharge will raise the freeze point of the electrolyte up to -40C and the battery could be permanently damaged by freezing1. Because of that, I would assume that some type of dry-cell battery would be more appropriate, unless you have a heated enclosure.

But let’s not let that prevent us from doing a little more figuring! So you want to run for 3 weeks? Let’s see how much power is needed:

So, in conclusion, two (2) typical BCI “group 24” RV/marine deep cycle batteries would be able to power one Reach module for three weeks at -40C.

As a side note, the same pair of batteries would last three times as long (9 weeks) if the temp was above zero C.

I hope that is as helpful as it was fun to figure out.

Wow, thanks very much for the detailed reply! I’d been out of the office for a few days, so this was a really useful email message to come back to! We’re now in the process of moving forward with the power assembly.

Agreed about the battery efficiency - we’re probably not going to be at -40C, but all the same it will be cold and the effective capacity will take a hit. Still, this is all part of the experimental nature of research! It’s possible that we might be able to service the stations half way through the programme, and bring along fresh juiced-up batteries for them.

I look forward to sharing some stories from the field on the return!