Reach losing fix in long sessions, back to single

I am starting to use a Reach for tractor guidance.
In the two long sessions I had so far, at some point after an hour or more, fix was lost and status went back to single for 15 minutes or more. This happened in the open field in perfect conditions. I don’t know what triggered it and why the Reach had trouble getting to fix or even float soon after.

Is there a way I can troubleshoot this? I have the logs of the second time it happened. Possible reasons I am thinking of:
-interruption of cellphone connection is the trigger? But it is stable here and showed no problems when it happened.
-slow solution when it happens is due to a low amount of correction satellites? The first time it happened, I rebooted the device a few times but still, solution only got fix after half an hour of single status. Afterwards I got some 3 hours of steady fix. Slow solution has not been a problem so far in a normal cold start-up.

The Reach is mounted with a battery pack in a box on the roof, with on top an oversized inox plate with the TW4721 patch antenna. Corrections from the local free NTRIP server Flepos (ntrip.flepos.be) through a wifi hotspot on my cellphone. This delivers correction signal for 5 to 8 satellites on average. Running latest Reachview 2.10.0. RTK fixes are achieved in minutes and overall performance is great.

Going back to single is why you loose corrections.

Using a cell phone is no good for this work.

I very suggest a mobile wifi Router with good antenna. Like teletonika…

You can see this happening by watching the information in the status tab of ReachView. Seeing grey satellite bars means the corrections are coming in. Seeing the age of differential stay to a low number means your corrections are arriving in a timely fashion. Seeing 5 or so GPS satellites with good SNR levels on base and rover means you should be getting a good signal for RTK fix.

Of course there are other phenomenon that one needs to keep in mind (bad satellite geometry / solar flares / various kinds of radio interference), so watch what happens on the status page next time and see if you can determine that it is a cellular data dropout, or something else.

Thank you for the info. In the field, the module is bluetooth connected to another program and I have not had the chance to check Reachview, but I will do that.

I suppose connection dropout might be the trigger. Both moments were in the weekends. I tried using 2G network (some say it is more stable since everyone uses 3G/4G here now) saturday and got a stable 1h30 session. Will see if that helps.

Attached an image of the antenna setup and some screenshots of Reachview just after a ± 1 hour period of the reach not getting to fix, staying in float. The antenna plate is attached with permanent magnets, is it possible these interfere with reception?
Is it likely my setup to blame or maybe the low amount of correction base satellites? 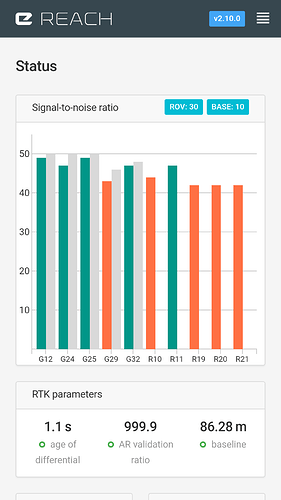 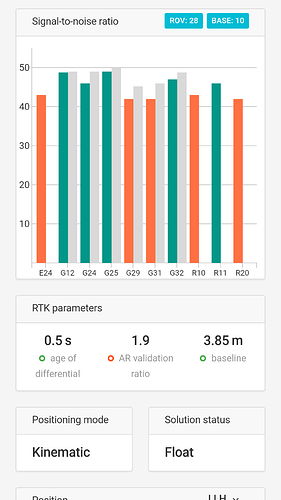 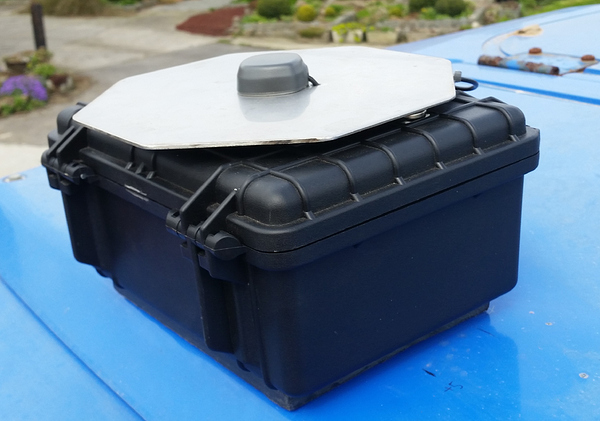 Good thing that the rover looks OK!
The base correction comes from a base network of the state. It is certainly not a Reach

They support GLONASS since 2011 and will soon support Galileo and Beidou. I will contact them, maybe it is a temporary problem.
Glonass AR mode is off on the Reach BTW. - Edit: this explains it?

Glonass AR mode is off on the Reach BTW. - Edit: this explains it?

Glonass AR is to allow a fix from Glonass satellites instead of only from GPS satellites. This is not related to your issue of no Glonass base satellites.

Can you to to the corrections tab in ReachView and see if there are any messages blow the main settings?

Glonass issue solved. Apparently the nearby base receiver was renewed recently and was wrongly configured. Tested today - Glonass is back in the corrections 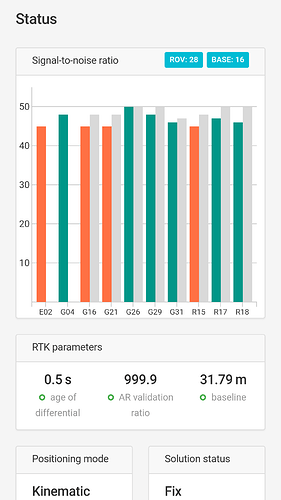 Excellent! I’ll bet you don’t see that problem again now that you have all those extra satellites.

Just a small note, please keep Glonass AR off when working with a non-Reach base.
https://docs.emlid.com/reach/common/reachview/rtk-settings/

Had a 10 hour session today with only the first few hours 10% of the time float, after that fix for half a day. Just one time there was an interruption to GPS fix (on 2G instead of 3G/4G network). By chance or not, it was seconds after I got a whatsapp message on my phone. So probably the phone indeed is not the ideal tool. I will test with a dongle mifi router soon.