Im currently in the planning phase of a new project that includes use of the Flir Lepton thermal camera.

My question is:
Is it possible to connect the Lepton breakout board to the Rasperry Pi when using the Navio2? Specifications for the breakout board could be found here:
http://media.digikey.com/pdf/Data%20Sheets/FLIR%20PDFs/LeptonBreakout_PB.pdf

Thanks for any advice or ideas. I’m new to the Raspberry Pi.

Hmmm you could connect this to the SPI bus on the PI.

However from one of the creators:

@anemos GPIO17 and GPIO18 can be used as chip select pins using the new SPI driver, but I would recommend not to attach anything to the SPI bus, it is quite busy with the IMU and GPS and new device could ruin the performance. Is there anything special about these modules? They look just like usual RF modules, only connected over SPI. If I’m right it’s better to stick to UART or USB ones. @jeanleflambeur SPI GPIO CS do work, and we use them on Navio2. There is no SPI port on Navio2, but you…

Will this also apply to the former Navio+; which has a SPI DF13 connector? BTW, I though the GPS was running on the I2C bus instead. 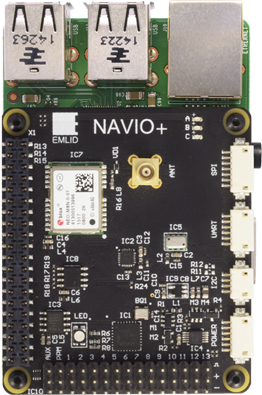 GPS is on SPI. On Navio+ we are not using AUX SPI, so it can be used to communicate with FLIR, but it is not the one that is on DF13 connector.

In general, I would suggest to get something like Seek. A device that would provide a USB interface to FLIR.

So what is the SPI DF13 connector on the Navio+ for?

It was meant mostly for easy access to the bus. SPI handles IMU and GPS and is pretty loaded with traffic, I would not suggest connecting anything additional there.

Developing an autopilot for Raspberry Pi is a lot about bandwidth management. It only has 2xSPI (1xSPI in official HAT), 1xI2C and 1xUART. You would want to have UART on DF13 for telemetry, so we can’t use it internally. We have to move data from 2xIMU, 1xGNSS, 1xBaro and IO co-processor with minimal latencies and at very high rates. To optimize flight performance we have occupied all buses available on the 40-pin connector and this is why we suggest to use USB for extensions.

Thanks Igor for the clarification. I have a few more question. What about if I’m planning to fly indoors with GPS disabled, can I still connect the Flir to the SPI DF13 on the Navio+ HAT?

Regarding the I2C connector on the HAT, can I use it to connect the TeraRanger One to the Navio+?

You can try. What I would suggest to do is to do some bench testing and monitor parameter group “PM” in the logs. Make sure that there are no spikes in MaxT over 3ms and that Nlon is not growing significantly. These are main indicators of performance.

I would recommend replacing the FLIR Lepton breakout board with PureThetmal 1 breakout. It provides plug and play connectivity over USB at up to 9Hz. I too would recommend the cameras from Seek Thermal, however they have not been forthcoming with their promised SDK, so integration will require some reading.