Is the recommended ground plane size the ACTUAL size you want? Or is that size considered a minimum size needed?

My current ground planes(base/rover), are made from abs plastics and then wrapped in a copper tape and have a diameter of 6.25”(158.75mm).

I was going to redo them and make them a little bigger with a diameter of 10”(254mm).

In the category of ground plane, is bigger better? Or is it, “Bigger is not always better”?

Picture of my base… 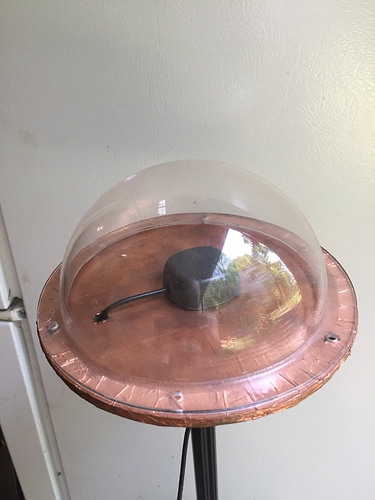 Could my acrylic domes be affecting anything?

Looks good to me. I really like the radome. The acrylic, if it is equal thickness all around and equidistant from the antenna, then it will only have a small bit of signal attenuation.

I see small wrinkles in the copper tape. Probably not a big deal, especially if they are radial from the center. Perfectly flat would be marginally better if you could do it.

As far as diameter, I do have a old thread here somewhere about it. Basically, your ground plane not only blocks multipath signals, but the diameter is a tuning mechanism. It changes the gain of your antenna at different frequencies. If I remember correctly Beidou likes a small ground plane, Glonass likes a large one, GPS somewhere in between, etc, etc. The diameter of our ground plane must be a compromise. It is the same for a radio antenna that must operate with wide band of frequencies.

I wonder what size the interior of your dome is? Maybe that diameter would work?

If I was being really picky, I would make a disc that fits up inside the dome. Say 1/4" thick or twice as thick as the acrylic flange and made of metal or your ABS with copper tape on top. Then for the mounting base, I would use the same ABS you have now (but uncoated) and nylon bolts and nuts to attach the dome. Also, I would turn down the antenna lead to make it disappear as close to the antenna as possible, making sure that it bends on a smooth radius (minimum = 1.5 times the diameter of the cable).

…or just leave it. It does look pretty good as it is. I think your design will really prove it’s worth in the rain and inclement weather. Keeping water from beading directly on the antenna and the surrounding ground plane should be very helpful. You could even consider some treatment for the dome, such as Rain-X which prevents water from beading (while hoping that it doesn’t have poor RF transmissivity).

There has been a lot of forum discussion about the antenna ground plane. I found some literature from UBlox on the topic: GPS Antennas: RF design considerations for u-blox GPS recievers (pdf) And here is the datasheet on the antenna supplied with Reach: Tallysman TW4721 (pdf) What I got out of it is: Our antenna is: tuned for 1559 to 1606 Mhz measures 38mm square (the ceramic patch is 25mm approximately) Manufacturer recommended ground plane size: Ublox: 50 to 70mm Tallysm…

I measured and have some specs for my dome… 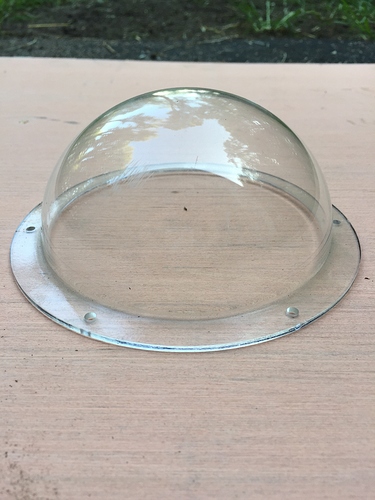 Do you think I should try to make a smaller GP to fit “inside” the dome and have the actual dome mount to a separate “layer”. I was thinking something like you mentioned, like this… 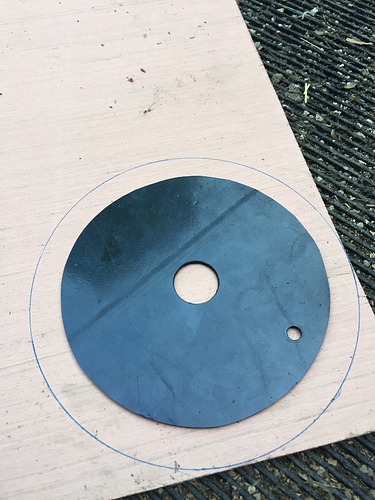 The pen circle would be the domes mounting flange, and the black abs(don’t mind the holes, it was scrap), to sit on top of the first mounting layer and “inside” raised up into the dome. My abs plastic is 3/32” thick so it would raise my antenna exactly flush “into” my dome… 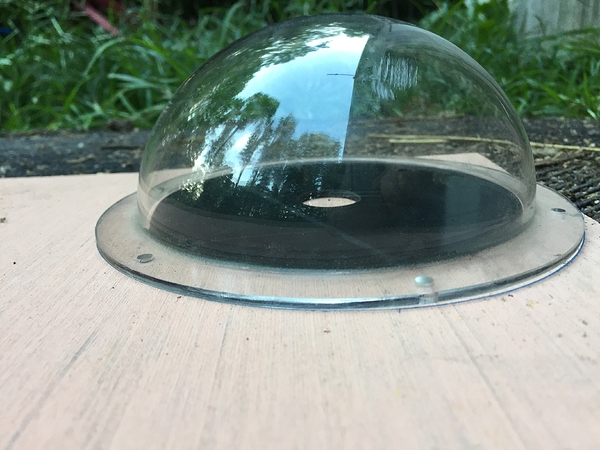 I only said the plate thickness should be double to get it up above the flange and fastener height. But that looks pretty good right there too.

I could easily add another 3/32” layer of plastic. The dome has a slight vertical space before it begins to “curve”. So I could at least raise the antenna 3/32”above the domes flange.

One other minor detail that I have wondered about is whether the layering of strips of copper foil has any detrimental capacitance effects compared to a single homogeneous film. I know some of the copper foil product is produced with “conductive” adhesive.