Hey guys, I need some help related to the GPS examples on the docs site.
All the examples are working good for me, but the GPS is the problem.
I installed the gps antenna, but I always only get 0 lat and 0 long. I know it takes a while for it to calibrate and all, but I waited for half an hour and nothing.
This was when I was using the C++ example.
On the python example is even worse. It doesnt even appear anything. It just appears the underline blinking and thats it.
As I said, I am using the antenna, but I am indoors, which I know makes diminishes the sensitivity of the gps, but still I should be able to get something.
Anyway, thanks for the help in advance

GPS should be tested outdoors to get a fix. Until you get a fix you won’t be able to observe accurate coordinates.

thank you. Will test outdoors and update this topic. How about the python example, is that normal for a no fix case?

No, Python examples should produce the same output. In case it doesn’t, try this on Raspberry Pi: 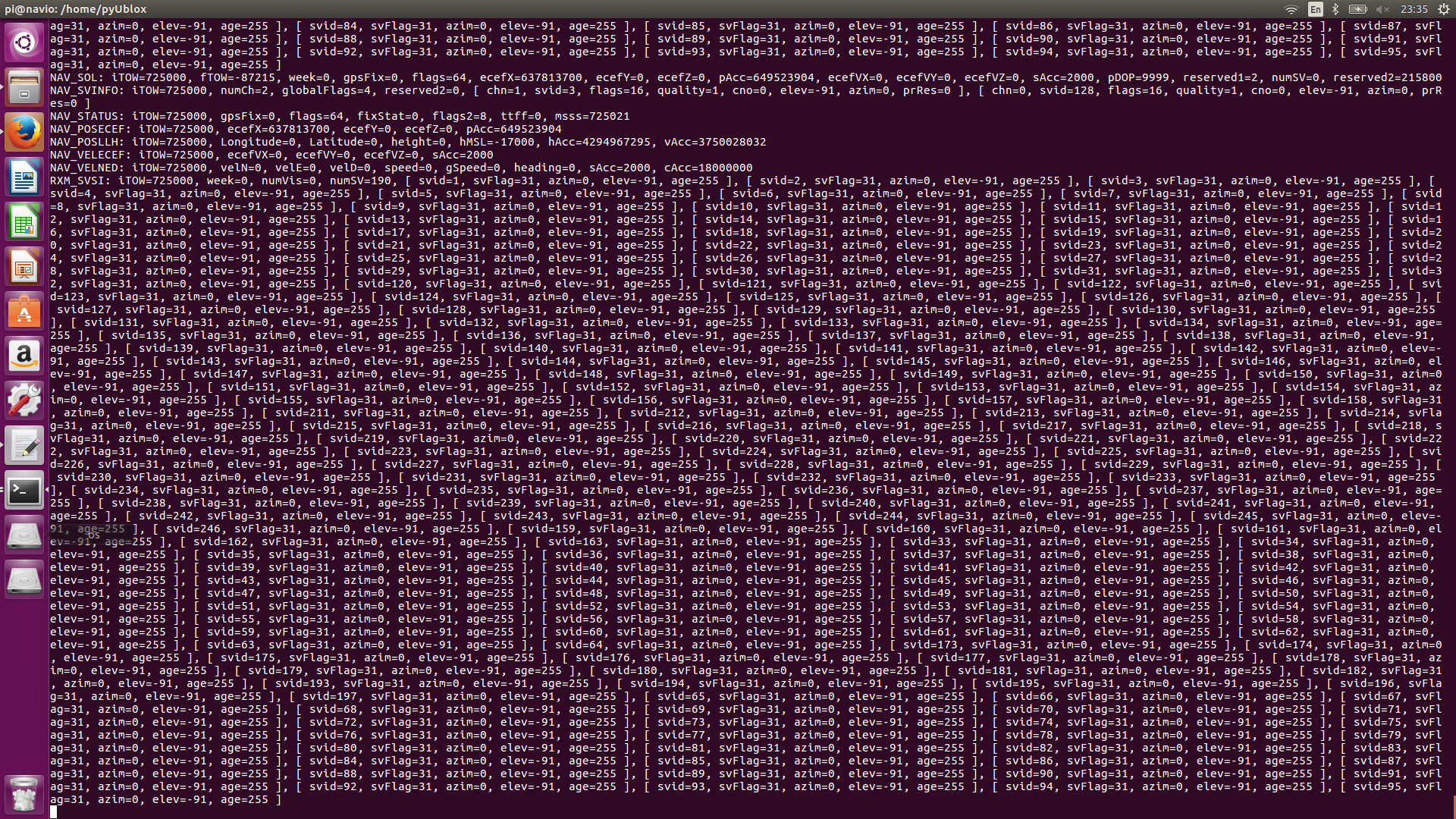 I did it and got this result …still indoors though, its night here cant try outdoors right now, will do it tomorrow

Any idea of why the other python code didnt shown anything?

I did it and got this result …still indoors though, its night here cant try outdoors right now, will do it tomorrow

The output indicates that your GPS is functioning alright. As soon as you stick your Navio out in the fresh air you’ll get gpsFix=3 in NAV_STATUS in a couple of minutes.

Any idea of why the other python code didnt shown anything?

It seems like Ublox.py is buggy. Sorry for that. It had been fine but for the time being it seems to be faulty. We’ll replace it with the pyUblox I provided you a link to as soon as possible. Sorry for that

Thank you,
I tested today outdoors and the c++ worked

WHen do you think the python will be available??
I really need it ASAP ㅠㅠ Like really kkk Should be using it right now as we speak

If you need it ASAP, I suggest using the repo I sent you the link to.

This is just a question, what OS is that? Is that Linux OS? Because it seems like most of users use that OS. Like on Etcher guide video on docs.

Hi, @Andrew_L .
You don’t need download this OS for using navio2. On screen user just connect to navio2 from PC with Linux OS. For Windows you can download “Putty”.
But if you want download Ubuntu - welcome.

But I know that Navio2 OS does not have GUI because it does not required. But if I download Ubuntu, is that mean download on RPI and Navio2? or just one of my laptops…

On screen user just connect to remote terminal. That’s all. You can do this in your OS too.