I just wanted to share my prototype quadcopter. It has yet to make it’s first flight, but tests are looking good.

The battery leads are routed via an AttoPilot 180A voltage/current sense board and then connected to a self-made wiring harness to feed the BEC and ESC’s. The RPi+Navio+receiver are all powered by the BEC via Navio’s servo rail (I put a jumper between the servo rail and the 5VRPI-pin). The AttoPilot’s outputs are connected to the ADC on the Navio.

As I couldn’t find any SBUS to PPM converters and/or PPM receivers in stock anywhere in Europe, I decided to try the SBUS decoding with ArduCopter. Unfortunately, this proved to be useless (delay’s of several seconds were not uncommon).
Several weeks later, still no PPM converters in stock at all mayor shops in the EU, I had to find an other way: I noticed the APM code tries to decode PPM, SBUS and DSM protocols on the same input pin, regardless of how the actual signal is encoded. Once I disabled the PPM and DSM decoding functions (see libraries/AP_HAL_Linux/RCInput.cpp, comment out lines 331 and 337) and recompiled the code, the SBUS decoding seems to be working much better. I still have to test this in-flight, so don’t get your hopes up, just yet.

I also have a RPi 2 + Navio+, but that one is currently serving as a test-platform for my Python-Navio extension. It might find it’s way to a new quad or hex once I start my own autopilot project written in Python. 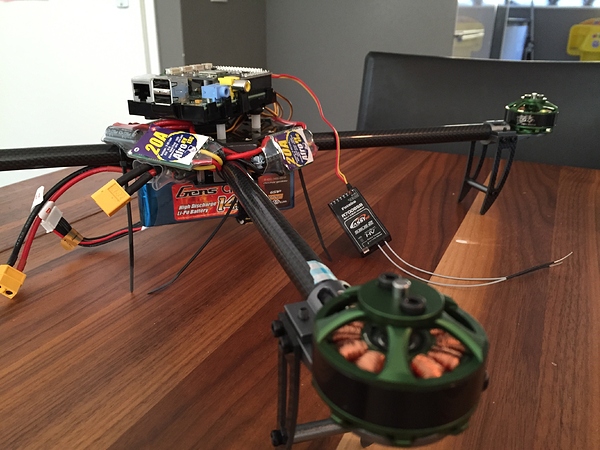 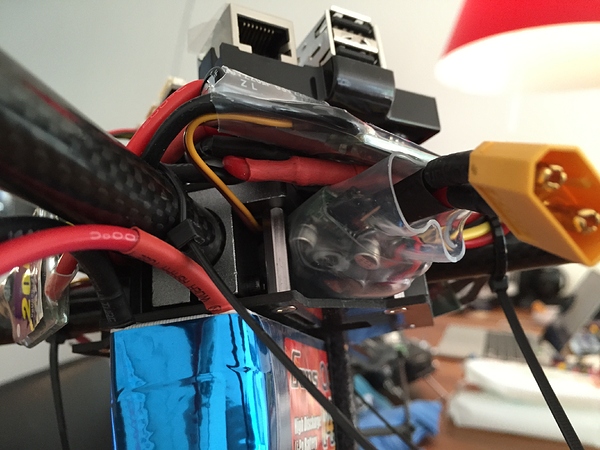 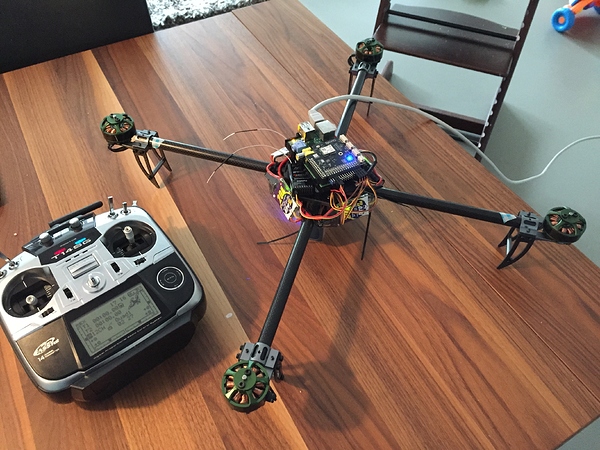 You can find your converter on ebay, I’m sure. All your EU sources just get it from China anways. If you really want to go directly to the source use taobao. I have found stuff on there you can find anywhere else and usually for a fraction of the cost. It’s a bit of a pain because you need an agent, but worth the extra steps.

What’s your hdop without an external gps antenna?

Will your pi have another purpose during flight or is it just acting as an auto pilot?

Yes eBay would be a good source to find one, but I was in a hurry to continue the project

I hope the SBUS decoding will prove reliable, but we’ll see how that works out.

The GPS antenna (the one that Emlid originally sold with the Navio) will be on top of the RPi case. The top cover is not mounted in the pictures. I made some extra cut-outs in the cover to accomodate the pins and sockets of the Navio.

For now, the RPi will just be running APM to act as an autopilot. My next project will incorporate more features, such as a gimballed camera and 4G modem. Hopefully by that time it’ll run my custom software as well.

So, a few days ago I successfully performed a test flight! The SBUS decoding seems to be working perfectly:
VIDEO

PS. the guy in the video is a friend of mine.

I see you’re using 6C LiPo. Do you use the power module or not? I’m also running 6C only Navio+ but since the provided power module only supports up to 6C, I’m powering up my Navio+ sorely from the servo rails using BEC. It feels a bit insecure knowing there’s no backup power supply once the BEC goes wrong.

Yeah, I’m also powering everything from a single BEC (5A). Apart from the Pi and Navio, there are no loads on the BEC, so I think the risk is acceptable for now.

Hello Benrexwrinkle and thanks for sharing your build. I have also used the HK 3508 268KV motors on a build. I’m not overly impressed with the motors. But, they do perferm well with the correct batts. I intended on using 6S batteries. However, the multirotor seemed gutless. I then tried 8S (using two 8000 4S batts). I think the motors respond much better to the 8S. My setup is a 650mm carbon fiber quad frame using using the X8 configuration. I’m using the same motors and esc’s, i have 1455 cf props and I’ve tried the 1355 cf. It’s heavy small and powerful. The batteries I’ve used are only 10C rated so i do any crazy maneuvering. What type flight time are you getting with 6S? Have you tried any other batts or props with this settup?

hi, i made an order to HK to make a built with turnigy talon. i have not purchase motors yet. i want to use a gimbal in the future so i need motors to carry it. can these motors make the job done?

what does your link has to do with motors for a gimbal? please explain more exactly what you want to say; you are responding to a posting 10 months ago; you are very likely spamming to advertise