Problems with interference from USB3 hub

We are using a single Reach module together with base corrections from a land surveying service for driving a remote controlled car, but we have had some problems getting good signals.

When the GPS antenna is away from the car we typically get a very good signal (>40% SNR on at least 2 satellites) with Float (and occasionally Fix) as solution status. However, as soon as we keep it near the car the signal drops significantly, to the point where it can’t find any solution.

After some testing we realized that the problem seems to be caused by a USB3.0 hub on the car. Simply connecting a USB3.0-compatible USB-hub almost completely jams the antenna signal (meaning we get connection to at most 3-4 satelites with <20% SNR). Note that we can connect any number of USB2.0 devices with little to no impact and that the wifi connection is unaffected. 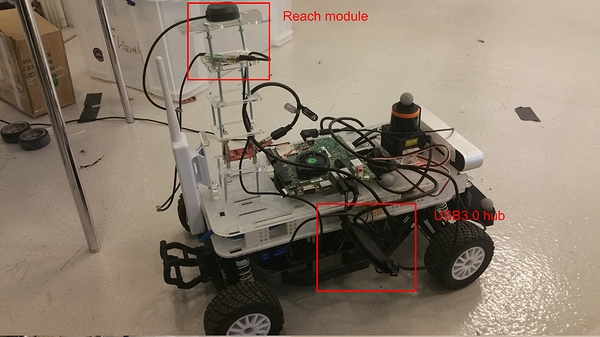 Looks like that groundplate under reach antenna is not of metall?

Yes that is correct. But we also tried with a fairly large metal plate and it made little to no difference.

When no devices using USB3.0 are connected it works fine even without a metal ground plane.

I would definitely use grounplate under antenna. At least 10cm radius. Foile will do
Does reach share same powersource as hub?

Ok, we’ll take a second look at the groundplate.

The same problem occurs when the reach is powered by a separate laptop. As soon as the antenna comes close to the usb connection it loses the satellites. We’ll hopefully be doing some more tests today, so I’ll try to make a more detailed post later.

Potential multiple causes. Lots of trial and error to solve.
(Isn’t the easiest thing in the world to do…)

Here are some updates. We are fairly certain that electromagnetic disturbances from the USB3.0 hub are causing the issues. We plugged the Reach module into a separate laptop to make sure it wasn’t a power issue, see below: 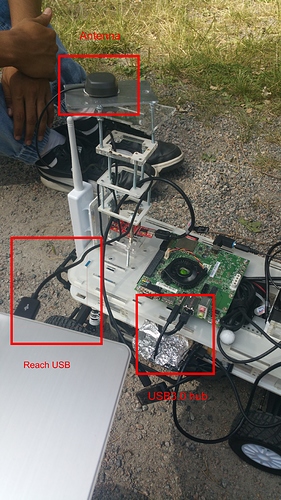 The signal we get is significantly worse when the hub is plugged in: 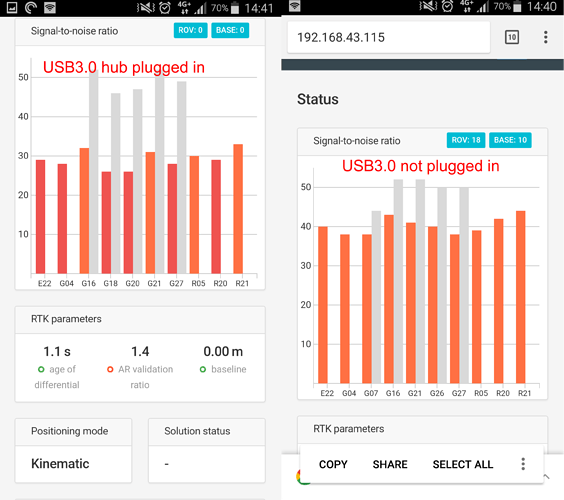 Our only solution right now is to cover the entire car in tin-foil. This improves the signal by a lot (~50% SNR on at least 3 satellites). We are working on a more permanent solution though… 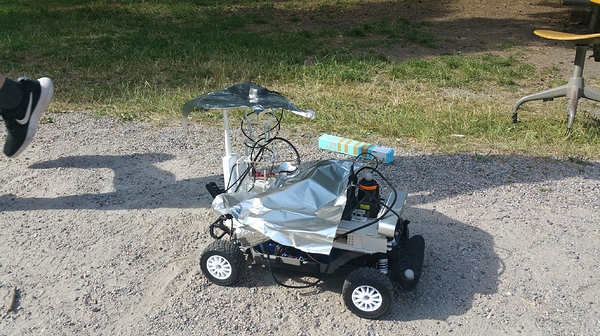 It soon looks like something NASA would use. Mars rover

I think the Edison Wifi antenna is board mounted, so you may have to use a window for it.

USB3.0 is known to cause interference with 2.4GHz and GPS. So unfortunately you will need to find a way to shield everything working on USB3.0 or use USB2.0 gear.