Problems getting a good position on latest beta

I’m completely new to this, so apologies in advance if I’ve overlooked something basic.

I’ve been testing a couple of Reach units for the past few days in several different positions, both as standalone units and with a base and rover. The base unit is currently running the latest beta version of the firmware/ReachView, while the rover is on the latest release firmware/ReachView.

Regardless of what I do I’m having problems getting a stable position; both units are moving all over the place with a precision of something like +/- 2 meters, if not more. The best solution status on the base is single, while the rover is able to get a float. Both antennas are mounted ~2 m above the top of a roof on a plastic plate (~20x~40cm) covered with tin foil.

Is this normal/as expected, or should I expect a better position? I’ve included a screenshot of the status page of the base in the hope that it’ll help anyone taking a look at it. Please let me know if there is any additional information you need. 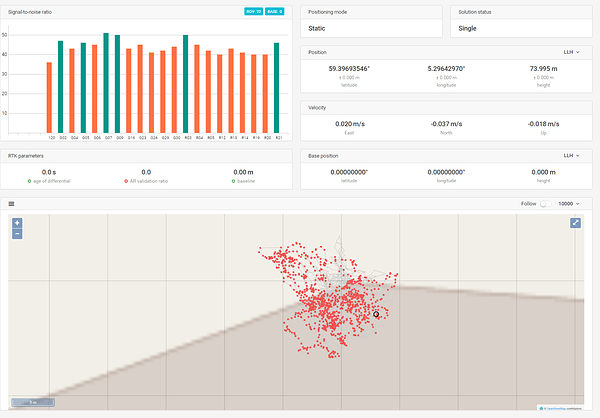 The rover doesn’t receive correction from base. The base should be base mode which give correction to the rover by tcp, radio, or ntrip. You can follow the instruction
https://docs.emlid.com/reach/quickstart/

When base is outputting corrections to rover it is normal that it has only single solution. Float/fix is happening in the rover.

Dicky: The rover receives corrections; I can see the signal bars from the rover and the base in the rover webapp, and there is also a marked difference in position and stability on the rover once I turn off the correction on the base.

What I’m wondering is if the plot in the screenshot above is typical for a base? Is it supposed to be this unstable?

Hi,
signal is about ok, but can be better. But i would not worry to much about this yet. It is when you combine more then one unit you get that accurate data.
If you hade placed base over a known point and fed it into reach under base mode. This and satellite data base recives is calculated at rover and get corrected. Values output at rover is the interesting part.

Yesterday i surveyed for postprocess, and used reach as signal and logged 15min over a fixed known point. My plot showed reach to be within 1x1m. I had good signals and free skyview.
Here is a signal image, didt get one of the plot though 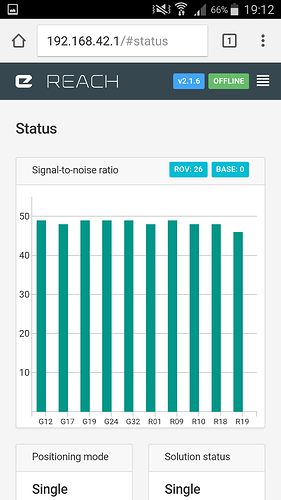 What I’m wondering is if the plot in the screenshot above is typical for a base? Is it supposed to be this unstable?

It is completely normal. Base is working as a rover at the same time, so it will transmit corrections based on the entered or averaged coordinates, but try to calculate own single solution as well. It does not change the quality of the corrections.