My first question pertains to whether to install the apm.deb package or to build from source myself (outlined here). If I want to modify some driver behavior in the future, would building from source be better for me?

Also, I am having some trouble with calibrating my ESCs (link). I have been reading over the forums and some documentation on how to calibrate them and I can’t seem to get it to work. My Taranis is working and calibrated, and when I run the APM binary, the ESCs beep emit one low beep and one higher beep. However, running APM binary with the throttle high or low does not change the sound my ESCs give, which means it is never going into calibration mode. Is there something that I might be missing here?

For your first try it would be better to install the deb package and as soon as you are ready to make changes to the code try to compile APM from source.

Can you try calibrating your ESCs one by one, connecting them to your receiver 3rd channel?

Thank you, I will try this when I get back from holiday

I have the same problem too that don’t know how to calibrate when ESCs connected to Navio, and I have calibrated ESCs one by one by connecting them to the receiver, but it can’t be taken off.

I calibrated the ESC by plugging it into the receiver, not plugged ESCs into to Navio because I don’t understand how to calibrate while ESCs plugged to Navio. Usually the ESC go into the calibration when it detects the throttle was in MAX position while it was powered on, but when poweron the APM for Navio had not been run, how can it notify the ESC goes into the calibration?

And I found the motor speed does not fully following the throttle position, this behavior is very frightening, do you have this problem?

Read this all the way through

All at once calibration is possible on the navio, but a little difficult if you don’t have ardupilot set up to autostart on bootup.

The sure fire way of calibration is one at at time.

The problem you describe above sounds like at classic example of improper calibration.

In the current version of Mission Planner (1.3.34 build 1.1.5836.10557) I was able to calibrate the ESCs without any RC input sequence. That’s much easier than before. Now the ESC calibration screen is completely different with simple instructions, of which these are relevant for Navio:

It’s clear the the movement is not necessary because the range from RC calibration is being sent automatically. Neat!

I don’t know if Mission Planner or APM added that, i.e. if it’s required to have a certain APM version or if it works that way in other GCS software. It certainly simplifies setup for Navio.

Maybe that was added earlier but I just found it

By the way first I had weird ESC behaviour and even one not working in APM but working separately on a servo tester, getting dangerously hot without any green light. That was fixed by re-flashing the ESCs with the current firmware.

The sequence should really include checking/flashing ESCs at the beginning unless you can’t do that or are sure the factory settings/shelf-time were exactly the same.

I was able to calibrate the ESCs 1 by 1 by plugging each into channel 3 and doing it manually. I just tried your Mission Planner method @CodeChief, but it gave me an error that I needed version 3.3+. That method would have been pretty cool, but manual calibration will do fine.Also, I have some new tuning issues.

When I first arm my motors and push the throttle up a little and leave it, the motors slowly get faster and faster for about 5 seconds, before stabilizing. They don’t ever go fast enough to get off the ground, but I think it’s probably abnormal for this to be happening at low throttle, when I am not moving the throttle stick. Has anyone else experienced this issue?

First confirm the RC channels are all mapped correctly. Do you see the correct behaviour of throttle/yaw (left stick if mode 2) and roll/pitch (right stick if mode 2) coming through to Mission Planner’s RC calibration screen? Do you have values ~<=1000 and ~>=2000 detected/calibrated by your movements? e.g. with a Taranis the lower is ~988 and upper ~2012.

Once that is confirmed, then we don’t need to talk anymore about RC input and can focus on the output/ESC/propellers. Did you double-check all motors are spinning the correct directions, and props are the correct way around. Usually that means the writing is on top and you bought different (CW clockwise and CCW counter-clockwise) propellers, installing them on the appropriate motors. On the quad X they should be spinning so that the propellers are pushing against air from the side around into the middle front/back ends of the frame.

Check your ESCs are programmed and no advanced options are enabled. Even if your ESCs don’t support flashing there should be a “programming sequence” or card which enables or disables various settings. All ESCs must have the same firmware and configuration.

Check for dry solder joints if you did custom work on the cables to tidy the build. Use a servo tester on each arm/ESC input to confirm the behaviour is as expected (somewhere near lower PWM start to somewhere near upper PWM full power) and that no excessive heat is generated by the ESC during light/testing operation (bad ESCs and motors are common enough when buying relatively cheap mass produced products).

Check there is absolutely not more than one power input connected to the Navio servo rail. The only device connected to power (output) should be the RC receiver unless you have servos for landing gear/gimbal, etc… Disconnect any other devices from the servo rail until the motor problem is fixed.

Reset all APM settings to default with the current Mission Planner software and don’t use the wizard to configure it. Manually click through the Mandatory Hardware and the Battery Monitor and Motor Test of Optional Hardware. The Motor Test is probably the best point to stop at when it doesn’t work. Then describe the exact behaviour and share the logs at this point (best on DIY Drones forum but we could also try to understand it here) for further diagnosis.

You could also try the master build, then the new simplified ESC calibration should work. But that shouldn’t be necessary because the Emlid apm.deb build is stable for many other people. In case you want to experiment with 3.3.2 “master” this procedure and script will load that easily for you: APM 3.3-rc9 beta testing

After that, I have come to this conclusion:

Not saying there is a problem, but it was strange how my ESCs just stopped working and had to be re-flashed to get them back. Maybe this problem was caused by the current development “master” build.

I’m manually programming all my ESCs now, it’s easier and I want to know exactly that it is set to the specification anyway. As my Taranis outputs 988-2012 I decided to set 1000-2000. Here are my settings: 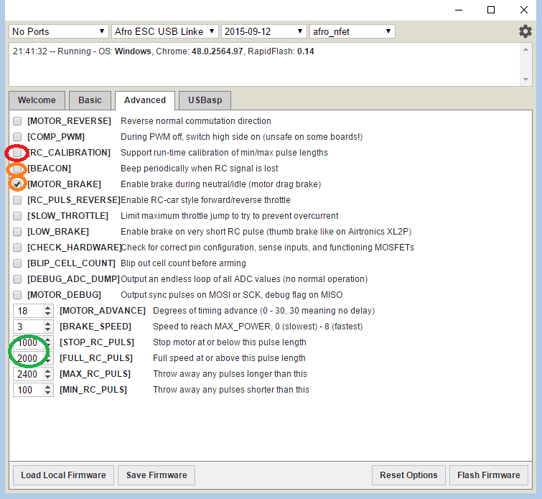 Now on the motor test page they spin at 4%. I could go nearer the limits I suppose, maybe 990 and 2010 or exactly 988 and 2012. I’m following recommendations from a model I had in Cleanflight where people set the PWM range manually just a bit inside of the raw range and it worked very well.

By the way, enabling MOTOR_BRAKE and disabling BEACON are not necessary, just my preferences. I have a lost model alarm already and like snappy performance.

Not suggesting the average user should do this, just my take on it.

Thanks for all the feedback on ESC calibration. I will need to do some more extensive testing. At the moment, I had a crash and need to repair some parts of the frame before I can get it up in the air again. Will report back here when I get to that point.