Hi, I performed some inspection work at a construction site and a building prior to the roof being replaced.
-I used my M2 base and M2 rover set up

The estimated accuracy of the PPP is pretty good right? So I should have some pretty good absolute results. In looking at the 2d map of the area of interest, things do not line up that well with google maps. Bad enough that I think a customer may question the accuracy. So, I am writing this to ask someone that does know, are the PPP results more accurate than the google maps or is the misalignment a red flag of a potential error in my work?

This is the CSRS report. I have removed a bit of content to be considerate of privacy but I think what is important is still in the report.
Report Grey Lined.pdf (928.8 KB)

Photos: Just demonstrating alignment with google maps. I am shooting for a good absolute correction. 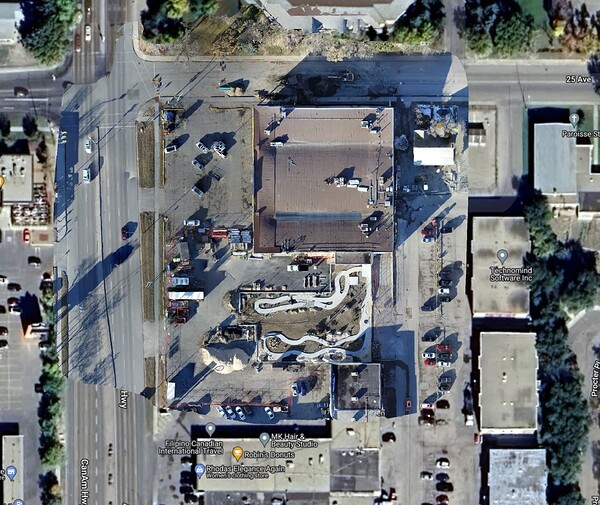 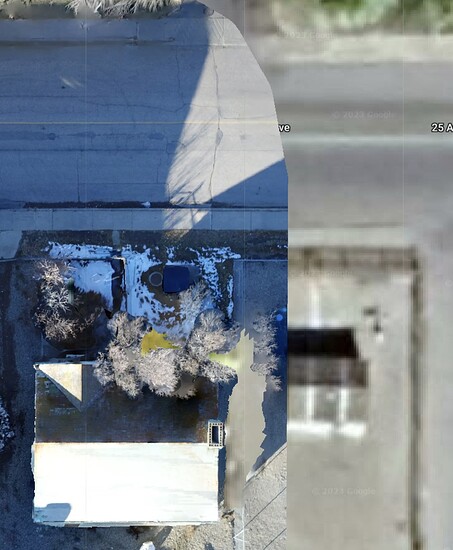 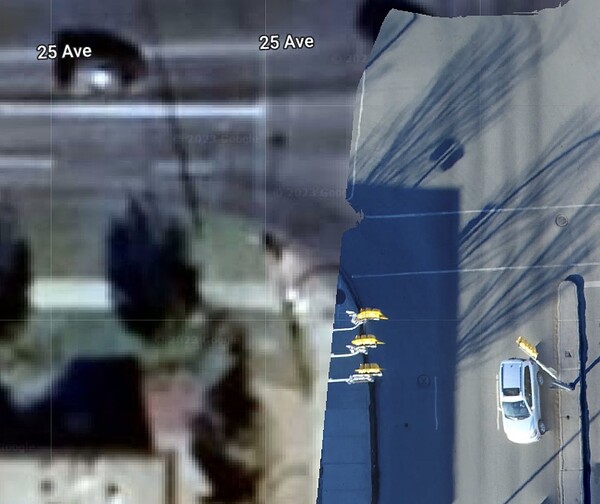 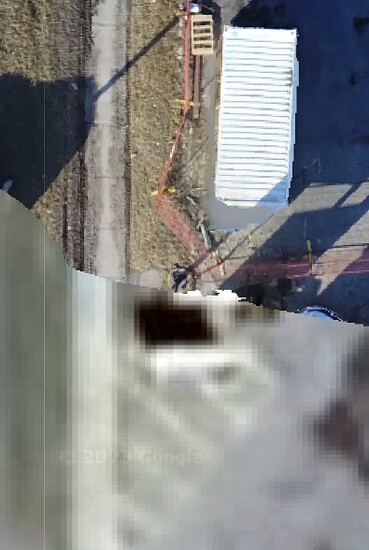 Hi,
Come on. First we have to understand Google Earth/Maps:
1 - Commercial use is not allowed (which does not affect your result, but it is important to know);
2 - They are not satellite images. They are actually a composition, a mix, of aerial photographs, DEM’s, and of course, satellite images; Not being pure satellite images, they do not have the necessary properties for geoprocessing or remote sensing;
3 - Date of the images. As it is a mosaic of several products, the same scene can have different collection dates. That is, the date is estimated;
4 - Distortion of areas. Google images are in Web Mercator (pseudo-mercator) projection. It is a variation of the Mercator system, however, it distorts the areas. That is, Google images are not reliable for calculating areas.
5 - Positional accuracy (positional inaccuracy): Positional accuracy varies from scene to scene. One of the factors that influences accuracy is the angle of taking images. These images are not recommended for jobs where positional accuracy is required.

In summary: Google images should only be used as a base map, a quick survey, research planning, something like that.

Your survey will never match Google Maps due to positional accuracy, the projection used, distortions…

Differences in position range from a few meters to 25~30m, depending on the scene.

I have to say that I always appreciate someone taking the time to respond to a question.
@mauricioranzan, you certainly addressed the compilation of Google Maps/Earth in a detail unexpected to me. Truly, I already understood most of what you brought up, however

Not being pure satellite images

was not something I had considered.
I think most of us do our homework before posting a question and I never found search results quite so comprehensive.
I do not understand the goal and purpose of leading with “come on”.
I also do understand that my map should never be expected to match Google when overlayed. This map, however, was so far off that it sent red flags out for me. Everyone makes errors, both myself and licensed surveyors alike so this is the reason to be transparent with my data. To be very clear, there is no implication of a survey at all, only the goal of providing a map with the inspection deliverables which is accurate.
So, I think you did a great job describing Google results, thank you.

If I can add a bit, in densely populated areas, the images are usually from an aerial survey (you can spot the targets in town when those happen, look for large white crosses on storm drains and manholes, for example) and the accuracy is often very good, the order of a few centimeters (commercial maps don’t necessarily access those high quality datasets though).

The nature of photogrammetry means that you will derive a general fitting model to the entire image that is based on only a small percentage of your pixels that are accurately georeferenced in the field. The vast majority of the resulting georeferenced pixels are thus interpolated. Considering there is a lot of very drastic relief around buildings, that can sometimes bring some severe misalignment.

If the survey was done correctly though, normally the roads and sidewalks are pretty well aligned as they are all mostly flat surfaces.

I think that is really well said Gabriel.

If the survey was done correctly though, normally the roads and sidewalks are pretty well aligned as they are all mostly flat surfaces.

I just do not get why a flat surface like a sidewalk would be any more accurate than any other flat surface, but maybe that is not what you meant. I think my reports support concluding a reasonable accuracy of the maps. @Gabriel_C do you have any thoughts specific to my project?

I am trying to determine now if I am overthinking this instead of just accepting the reports results. You have both provided good insight influencing my perspective on how I look at Google maps. Prior to posting this thread, I have always seen and accepted that there is areas that are more accurate than others and had an expectation of inaccuracy existing. The horrible alignment of the sidewalks in this project just bothered me so much.

The way I see it is that considering I can’t personally get any quality report on the imagery that’s seen on google, bing, etc., I never rely on them to evaluate my own mosaics.

If I needed to double check the accuracy after the fact, I would find an official physical benchmark, measure it, use it as a checkmark in my project (or at least tie it in to something in my project), then also compare this to its reported location from the org that manages it.

A few questions.
You said you set up 6 GCPs and show 5 in the ODM report. Did you use one of the 6 as the base position? In the ODM report, what is “GPS” referring to?
Did you try using any of your collected points as Check Points rather than as GCPs?

Why not PP another way… I do this all the time, whether using PP software or another online tool to process. My motto is PMW (prove me wrong). I’m not perfect, software isn’t perfect and the world isn’t perfect, especially google maps.

I take their imagery with a grain of salt. Sure you may have a true sloppy image, but are you really confident in your processed data (GNSS and imagery) ? It would seem that the base was corrected for but not the rover shots with the new base position.

If there’s an issue with the final data and your imagery, I would re-process or have someone else to look at the project.

One of the six rovers was used as a checkpoint. All of the rovers were corrected. I have PPP results on the base and corrected Rovers. And that’s my main question was about the accuracy of Google Maps.

I thought I clicked the solved button after the two immediate responses, because that was question answered for me.

I was just curious how you prove your drone surface was the reason for my question. It’s not clear in the web ODM report that you use checkpoints to determine the accuracy of your photogrammetry processing. Just saying that your points were corrected with a PPP workflow does not do anything to validate the drone surface. But I guess we’re off topic.

Thanks for such a well-reasoned discussion! You can always learn from it.

And I see that the main question is already answered by Gabriel. I just wanted to second his other thought: the best way to double-check the accuracy is to conduct a test on a benchmark with known coordinates. So if you see a mismatch in such a test, feel free to raise a new thread. We’ll investigate it.