I am having issues with my Barometer on the NAVIO2 board on a Raspberry Pi 4B, which is preventing APM from running. It should be noted that my setup was flying perfectly until just today. Testing the “Barometer.py” script from the NAVIO2 repo is showing -200 degrees C and negative millibars (and wildly fluctuating at that). I tried AC-4.0.3, 3.5.5 and 3.6.9 and all showed the barometer issue persisting.

When trying to start ArduCopter, the following error appears (on ArduCopter-4.0.3) 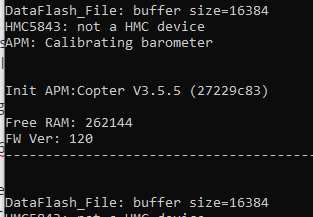 Running the following
journalctl -u ardupilot
Was returning

and ArduPilot wasn’t even starting upon boot (systemctl status ardupilot showed “failed”). Now it shows “running” but the barometer calibration issue persists and I cannot connect to a GCS).

I’ve tried adjusting the I2C baudrate from 100KHz, to 400KHz and the standard 1MHz on the RPi4b, but the crazy temperature and pressures keep being reported from the “Barometer.py” script. I’m running with the Buster OS on a quadcopter.

I’m not sure if this is related, but the barometer seemed to go to hell when I plugged in the PX4FLOW module onto the I2C bus and started playing with the I2C baudrate to get the OF module working.

Also, the barometer was covered with microphone style foam with no adhesive near the sensor.

This board has been working quite well up to this point.

I would really appreciate any advice/wisdom thrown my way here

Let me know if I can supply any other information which would be helpful in this diagnosis.

Does your barometer work when you detach the PX4FLOW camera?

Another question: did you install ArduPilot’s distribution without reflashing the Raspbian image?

Can you also share a picture of your setup?

I have replaced my setup with a new NAVIO2 and everything is working fine. Same SD card, ArduCopter version (4.0.3) and I2C baud rate (400KHz).

Does your barometer work when you detach the PX4FLOW camera?

Barometer was not working with and without PX4FLOW plugged in

Another question: did you install ArduPilot’s distribution without reflashing the Raspbian image?

I downloaded APM source to the RPI and compiled AC-4.0.3 locally without reflashing

I’m afraid it seems that the unit is broken indeed. Unfortunately, we can’t suggest any repairing options.