We have recently purchased EMLID Reach RS2. I’m using ReachView 3 to set up the unit.

I noticed there are “Correction Output” and “Position Streaming”. My questions is what’s the difference between the two.

I do understand correction output is the location correction that could be transferred through, NTRIP, Wifi, TCP etc… But what about Position Streaming? 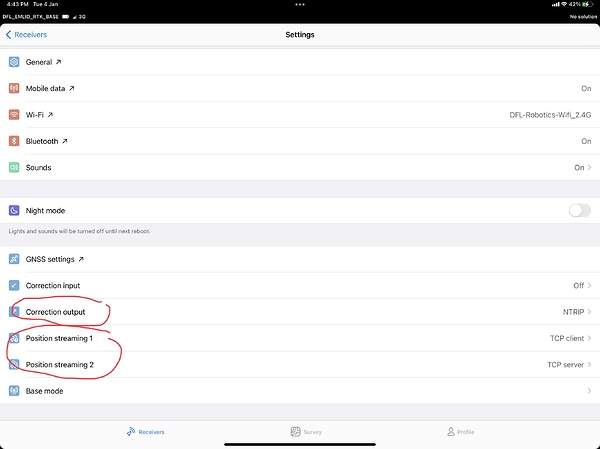 If its the check box that says send gga to vrs, its to give the vrs server your position so that it can create a virtual reference station for you by comparing close basestations in its network.

If its Nmea or Ubx, position output is to send position data to an outside device. I send NMEA to the tractors guidance system for example.

You can use pos1 and pos2 to send position data to two different devices.

I could use streaming 2 to send the same data to a separate app on a tablet over bluetooth.

Correction output refers to the method of sending RTCM messages from your base receiver to the rover receivers.

This can be done by various means, either through the LoRA radio protocol or using an NTRIP server, such as Emlid Caster or similar, among other options.

Correction input refers to the method that your rover receiver will receive RTCM messages from the base receiver.

If NTRIP, you need to choose the server and mountpoint to receive corrections. If LoRA, it is necessary to configure the rover to receive on the same frequency and air data rate as the base receiver sends.

Thank you for your answers!

Does that mean I can’t send RTCM3 through position 1 and 2?
I’m asking because I want to stream the correction through two different methods.

Does that mean I can’t send RTCM3 through position 1 and 2?

That’s right. The “Position Streaming” option sends NMEA or other formats to send the current position of the receiver.

No, on the base tab the correction output (RTCM) con only go out LoRa/RS232/TCP but only one of them.

Position output (NMEA or whatever format you require) can go out two ways, Bluetooth and Serial for example.

I see our users already explained everything pretty well! But in case of future questions, we have docs describing each setting you can find in ReachView 3. They are available here.