Offset between RTK and PPK solutions

I’m using a RS2+ base with a M2 rover with both firmware v29.2. The base is configured to stream RTK corrections over the Lora link. I’m trying to do some sanity checks by comparing the RTK solution and the PPK solution obtained through Emlid Studio v1.2. The baseline is about 5 meters. The base position is obtained by averaging its position over 5 minutes. I recorded ~5 min of static raw and position data for both the base and the rover. There’s an offset of more than 50cm between solutions. I would expect that both ground tracks to be at least almost centered. What could be the reason for this offset? Here is a snapshot: 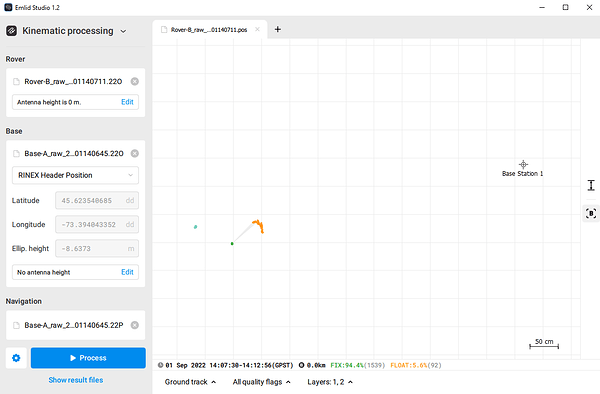 I would like to upload the data file as well, but new user are not allowed to post files.

Thank you for your help.

Hi Philippe and welcome aboard !

This is probably due to the fact that the base coordinates in use are not the same in your RTK session and PPK session.

The base coordinates in RTK have been determined by averaging the Single position during 5 minutes, after which they have been broadcast in the RTCM message, while the base coordinates in PPK, according to your screenshot, come from the RINEX header, which is obtained as the average position for the whole session. In Single mode, the position has a few meters accuracy. So even with a few seconds in difference between both determinations, a 50 cm gap is totally possible between both averages.

You can check what the coordinates of the base were during the RTK session by looking at the dedicated columns in the CSV export of your survey - Base Easting, Base Northing, Base Elevation - if you made one, but your message implies not I guess

Then, comparing them to the base coordinates shown in Emlid studio, you may confirm where the gap comes from. Anytime you set a base, I would suggest to copy paste the averaged coordinates somewhere, as a security.

Besides that, even if using the same base coordinates for both methods, you can have a few centimeters between RTK and PPK rover coordinates because the algorithm and the data used for each computation are independent. Not 50 cm though, which is why I think the solution lies mainly in the first part of my answer !

I couldn’t explain it better than Florian. Short and sweet! Fully agree here.

Philippe, if you need more help with analyzing the difference, you can share the files with us using Google Drive or WeTransfer. As Florian mentioned, we’ll need averaged position of your base in RTK and files with RTK and PPK solutions.