Off center mounting of Navio2 on a quadcopter

I’m curious what issues could occur if the Navio2 & Pi were mounted slightly rear from center of a quadcopter? Are there adjustments that can be made in the software, similar to the board orientation parameters, but to account for distance from center rather than angle from board?

I’m working on a build that will require the Navio2 sit 4-5cm rear of center. Will this distance even make a difference? Below is a close up of what I’m working with; the red dot in the image represents the approximate center of the craft.

I know it looks funny, but it is correct

I can fit the Navio2 between the two plates, but there is not enough room remaining for anti vibration gel or mounts, hence why I want to mount a few centimeters rear, more or less in the center of that large opening. Any ideas? 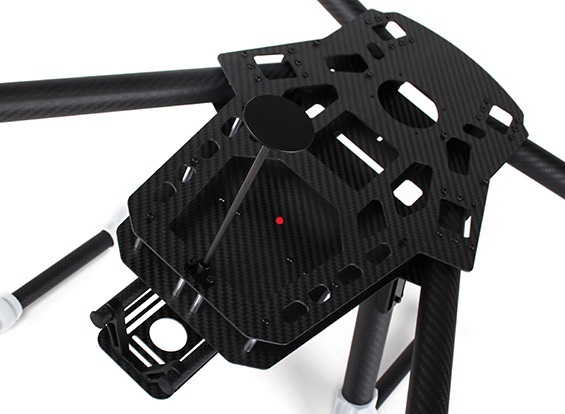 It is advisable to mount close to the CG, however no negative effect has been noticed when mounting slightly away.

I think, it should be fine. The attitude stabilization should work equally. For the GPS it totally doesn’t matter. I guess, you could theoretically mount the controller even under one of the motor arms and it would work just fine (beside vibrations). However, turns around the yaw axis would become tricky

Daniel, true for gyros, but you will start seeing centripetal accelerations in the accels as copter rotates. And they will grow as you are moving away from the CG. AHRS relies on accels to compensate for gyro drift, as well as for inertial navigation.

Thanks, good to know.

I once mounted my APM on the rear end of a reptile spider frame. In stab mode everything was fine, but in althold it started to go down with pitch down and up with pitch up, because the Z axis of the accelerometer saw the rotation of the quad as altitude change. This will get worse, the farther from center the flighcontroller is mounted. This applies to all flightmodes were althold is used.

This is probably more of a flight controller software question rather than hardware. Depends if the software can handle an off-center controller.

Thanks for the feedback. After looking up APM off-center mounting on google, it appears to be a semi-common issue, and APM seems to be able to handle not being perfectly centered. In fact, I was reading about some users mounting several inches off-center with minimal issues, so I figure a few centimeters aft shouldn’t be an issue. Guess we’ll find out soon enough

Again, thanks for the feedback, and happy flying!