In an effort to sort out why my base and rover don’t communicate via 3DR radio I have tried to verify that my Reach will output anything from the UART. In searching the forum I see that Emlid support recommend using a USB-UART converter to look at the output from the UART, specifically they say to use one based on the CP2102 . Having tracked one of these down I hooked it up to my Reach and plugged it into my laptop’s USB port. I set the position output to Serial, the baud rate to 57600 and asked the Reach to send me data in the NMEA format. I can see the converter as a COM port and the speed is correctly set according to the Device Manager. Looking at the port with a terminal emulator I see nothing! I connected the Grd, VCC, TX and RX connections (I tried reversing the RX and TX - it made no difference). I can see that a message on the Position Output screen in ReachView (I am running 2.5.3) that tells me I have connected to /dev/ttyMFD2. I believe that if I click on this, I should see information (the output) streaming. I see nothing. I expect (hope) that if things are actually being sent to the Serial port, this should appear when I click the message even if there isn’t a device attached to the UART.

Attached below is a copy of my setup 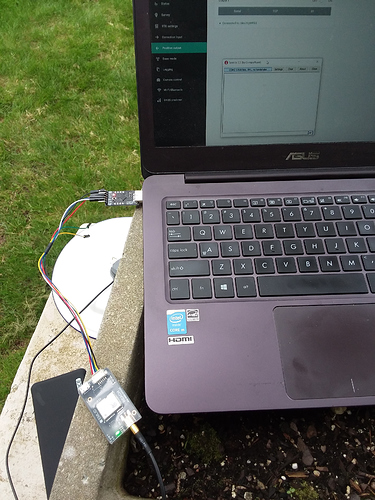 I have been able to get the base and rover to communicate via a TCP connection using my cellphone’s hotspot. This isn’t a viable solution for my application in the field so I need to get my radio communication working!

Have you checked to see if you get anything on the PC side by connecting the REACH USB port directly to the USB port on your PC? Make sure the right device (UART or USB-to-PC or USB-OTG) in this case, the USB-to-PC is selected under the Serial (Position output) connection tab (in addition to having the right Baud rate). When you connect the REACH in this way, a new COM port should show up under the Device Manager and you select the same COM port # / Baud rate, under the Termite. I was able to use USB-PC to see position information. I was also able to use the CP2102 UART-USB converter to see position information coming off the UART - so I believe that must be working. I have also confirmed that my 3DR radios are alive, see each other and can communicate with each other. Which makes me wonder why I can’t seem to send base corrections via the radios connected to my Reach’s UARTs!

I guess I’ll try and send position information across the radio link to my laptop.

I have noticed that unlike the position output tab, the base correction tab doesn’t tell me its connected to any device (/dev/…) when I tell the Reach to send corrections via the UART. Is that normal?

I have been able to send NMEA position information from a Reach via a radio (connected to the UART on the Reach) to a radio attached to my laptop and running a terminal emulator. I can do this from both Reach units so I believe the UART is functioning.

If I attempt to send base corrections from my base station via a radio connected to the UART I can see a strong blinking red led (at 1 sec rate) in addition to a steady green led which tells me that the radio can “see” the second radio connected to my rover (also connected via the UART). The reciever’s radio has a steady green led and a weakly blinking red led (again it appears at a 1 sec rate). Reachview on the rover does NOT indicate that it is receiving base corrections. The ReachView input/output settings on the base Reach are:

On the rover Reach the settings are:

The check box to send NMEA corrections back to the correction provider is NOT selected. Apparently this is required for VRS - what is that?

Hope somebody has an idea what I’m doing wrong. I’m using a pair of 3DR V2 radios (they are both connected to the UART on the Reachs) I have tried reversing the base and rover Reachs with no difference in the result. I modified the UART cables delivered with the units so that RX - > TX and vice versa. These were checked for continuity with a meter.

If you are familiar with the Linux command line, I could suggest a few troubleshooting steps for your Reach unit.

Watch this YouTube video and make sure you have the Tx/Rx wires connected correctly.

You may also want to look into getting the Base correction data from a NTRIP real time server in your State, instead of using a REACH Base and trying to get the 3DR to work.

I’ve played with Linux in the past. How do I gain access to the Linux command line? I’m guessing I need a Linux laptop (which I don’t have) to connect to the USB port of the Reach.

I looked at the video. It appears it confirms the changes I made to the cables. At least it confirms that its OK to use 3DR radios that are both attached to the UART on the Reach. The version of ReachView shown in the video appears to be older than what I am running - but its also appears to confirm I have the correct settings.

How do I gain access to the Linux command line?

If you are on Windows, then you can use Putty which is an ssh client. From there you can log in to Reach and run some commands to monitor the serial ports.

OK let’s assume I can do this. What do you suggest I do to monitor these serial ports? I am pretty sure the transmitting port (on the base Reach) is functioning, I can see NMEA text strings being transmitted by the device by watching the transmission with a terminal emulator. The base correction is not a text file so I can’t use this approach to confirm them. The led on the radio appears to be flickering at the expected rate (1 sec) so I suspect data is getting there. The problem I suspect lies in the receive serial port, so that’s where I feel i need to focus my attention. I should point out that the problem is the same whichever Reach/radio is the base, so i don’t think I have bad hardware, i have a setting wrong somewhere. I can get RTK to work when i send the corrections over a wifi connection.

Problem solved!!! It turns out I had a bad cable. Thanks for putting up with my questions!

Oh my god. I am really happy you actually figured this out! What cable, exactly?