I was at my state ASCE surveyors conference and was made aware of a tool that NGS has that can do multiple point conversions between coordinate systems.

However, WGS 84 is not an option. Start digging and reading around and now I’m more confused than ever in regards of the positioning of Emlid products. 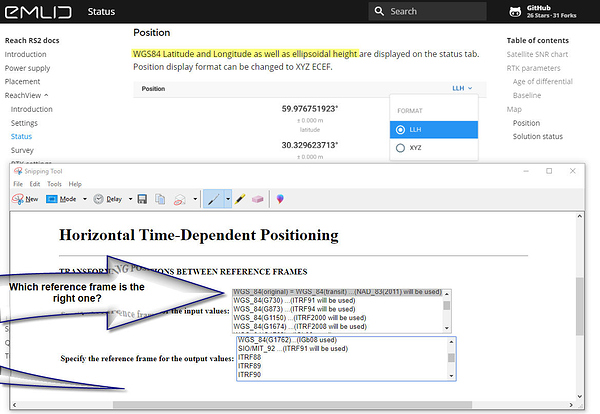 Can somebody from Emlid or anybody with a better understanding in Geodesy shred some light to me please?

I would like to know which reference frame WGS 84 Emlid utilizes to see if I can use the NGS tool for my coordinate transformations.

I feel like I’m in a Ice Cream parlor and they have 6 different vanilla flavors to choose from!

NCAT is just for shifting between various flavors of NAD83 and then it also gives you state plane and UTM output given whatever NAD83 datum you set as the destination.

the screen capture above is of HTDP which does way more. it can not only move between WGS realizations and NAD83 implementations , it can also account for local time based shifts based on plate movement (veloocity) hence the name “Horizontal Time-Dependent Positioning”.

as to the core of your question

emlid products are not set in any specific datum but they only work in the lat long coordinate system. so you could go out with one reach unit as a base station and have it autonomously average a point to determine its location. that point will be in WGS84(g1762) with a EPOCH of the day you gathered the data. you could then use HTDP to convert the point to NAD83(2011) and then enter that as your base station location. then start up the rover, get a fix from the base, and all of your resulting rover values will be NAD83(2011) in latitudes and longitudes.

you may want to fall down this rabbit hole…

Need to know the WGS84 realization. I have seen in several posts that folks use G1150 - out of use since 2012. I would like a definite answer for post-processing and for my own knowledge. Thanks!

I feel I need to elaborate some things. Not sure about the rabbit thing though…

So, what WGS84 realization does Reach use? I would say none, some, then all and lastly its highly dependable on the user on what data is fed in and taken out of it.

Reach only holds the original definition of the WGS coordinate system ( Defining Parameters, hence the original WGS84 realization). These coordinates is usually expressed ECEF or LAT/LONG (geocentric vs geodetic).
The WGS84 coordinate system is the same on all gnss systems but since its a refrence frame too it is different from Galileo, Glonass etc, hence the origin of coordinate refrence frame is realized seperatly for each system. This is where some might get confused. Reach doesnt hold any realization, it mearly forwards the data it gets.
More about it here https://gssc.esa.int/navipedia/index.php/Reference_Frames_in_GNSS

WGS84 is also a datum with its own refrence frame, the WGS84 realization (wgs84(1762)) is maintained for the GPS system only, not Galileo, Glonass and the others.
E.g Galileo has GTRF09, Glonass with PZ-90.11

Back to the question, what WGS84 realization comes out of the Reach?

1.If you use any of the official services that is up to date, in any form of phase/code correction, i would say the latest realization. BUT not all services is all that great and might be slow on updates, just as a caution.
2.For PPP you would have to read what the output documentation states. NrCan has this labeled really nice and usually the latest but upon new realization you might get caught in an older version. Just read documentation.
3.Using you own gear, own base setup or similar and feed old data into your base. It is going to be the same old data coming out in the other end hence rover is relative to your base.
Base set with WGS84(e.g G730) will be WGS84(G730) on the rover output

Basically you get the latest realization from all constellation if everything is up to date. But it all depends on what you feed into it.

Was going to post this in a another thread but in one of the earlier version of RS2 reachview, NrCan would not read the GPS observation and I only got the dual glonass frequens processed. Is was still an accurate position but the realization was tied to the PZ-90 only. It was relying on the glonass only