I’ve just received my Navio2 and am running into some issues. The pi is a Raspberry Pi 3 Model B Plus Rev 1.3.

The only device showing up there is on 0x66, and I’m not sure what that is. I dumped the contents of the chip ( with a TL866+ programmer) and found it was empty, and happened to find HAT not detected - EEPROM possibly corrupt? this topic that describes a similar problem of the /proc/device-tree/hat structure being missing, though his CAT24C32 did show up on the bus, and did have data stored in it. I checked the addressing pins on the chip (A0, A1, A2) and they are indeed all pulled low, the SDA and SCL traces also have continuity to the pins they should be connected to. I have not yet been able to verify that the CAT24C32 is being powered, I don’t have a male->female 40 pin cable atm so I can’t get to the chip while the hat is mounted. I plan to look at the bus with a logic analyzer, but I need to get the navio2 board away from the rpi so that I can actually attach probes to it.

As a result, the /proc/device-tree/hat folder is never created, and emlidtool thinks there’s no hat installed:

The STM32 appears to be working, the example code (C++) seemingly all work. Another oddity is that emlidtool rcio does not seem to recognize that the chip is there, but emlidtool rcio update -f does indeed update the chip. I verified the firmware on the chip vs /lib/firmware/rcio.fw using a blackmagic probe, the firmware is indeed written to the chip, and the resulting messages in dmesg are as expected: 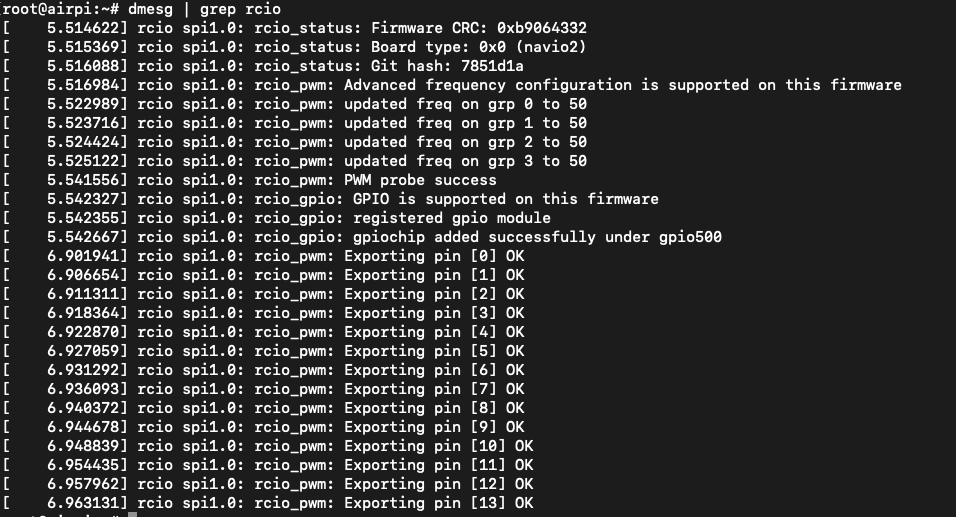 I did run into a problem last night where the forced upgrade suddenly hung and refused to complete, leaving the chip in an undefined state; this was very easily fixable by loading the fw binary with blackmagic and gdb directly.

Arducopter/rover 4.0 (haven’t tested anything else) also appears to work, but I haven’t done any extensive testing outside of sensor calibration, which so far has not had any issues.

and for good measure, output of i2cdetect -y 1:

EDIT: Picture of the board on the pi: 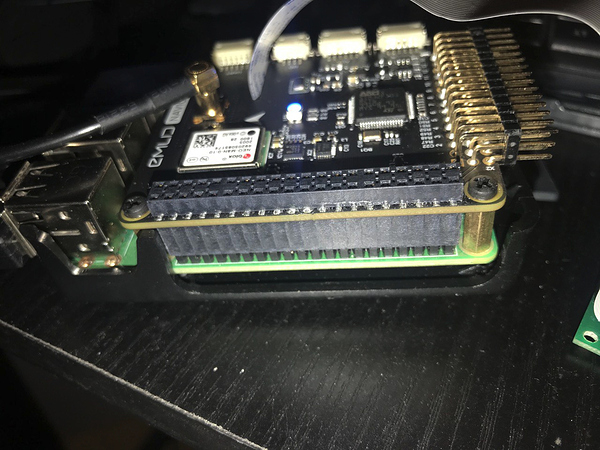 Anyway, I hope that I’ve provided enough information, I’m not really sure if my board is defective if it still works properly/reliably without the ID EEPROM, and if I should even worry that emlidtool doesn’t recognize the board.

Thanks for such a detailed description!

So, did I get correctly that you can launch the ArduPilot and connect the drone via the Ground control station?

Yep, that’s correct, the GCS connects without issue. I’ve now even tested PWM, it works, I can control servos with it, almost everything appears to be working, though calibrating the compass wasn’t easy, I kept getting an invalid orientation error towards the end, but it did finally calibrate.

How were you able to connect to the GCS and have connect ArduPilot?

Didn’t really do anything special, I’m using a UDP socket for telemetry.

When you say you’re connected to the GCS do you mean you can run python scripts from the terminal while seeing the data on the GCS?
That is what I am looking into how to do (if possible).

I honestly have no idea what you’re trying to accomplish, but I can see that you’ve made a post about it already (No heartbeat, connection timeout), I would suggest that you try to be patient while waiting for an answer, and not try to hijack other threads. I have been, and continue to be patient, and realize that the support staff are in fact very busy; I would appreciate if you kept your topic, to your thread please.

My bad, wasn’t my intention to step on any toes.
I was just trying to gather as much information as possible as quickly as possible.
I am working on a school project and have a very restricted timeline.

No worries, I gotcha, it’s just better that threads stay separate, otherwise it creates a massive mish-mash of information and topics become hard to follow.

No hard feelings though!

Thank you for your patience!

I’m just trying to catch the same behavior with the latest image. But to no avail so far. I’ll get back to you as soon as possible.

Please check your PM. I’ve just written to you there.

Update: The board I had was defective, Emlid replaced it and now everything works =)

Thank you @svetlana.nikolenko for the help, I really appreciate it!

Thanks for posting the update!