as I am progressing with my navio2 setup (i managed to use wifi for transferring video and telemetry so far), now i continued with the setup of radio input. I am using FRSKY DJT module on my Turnigy 9XR pro and FRSKY D4R-II receiver. I did connect CH3 and CH4 of D4R-II with a jumper and correctly binded my DJT transmitter and D4R-II receiver. But when I go to Mission planner radio calibration step, as you can see in the uploaded video, i have a huge lag… http://www.dailymotion.com/video/x4jxobb

Initially, i was connecting my NAvio2/RPI2 to mission planer through a wifi dongle using UDP connection type. I thought that my D4R-II was interfering with my wifi dongle because both of them work in 2.4Ghz…
So, i removed the wifi dongle and tried connecting my Navio2/Rpi2 to mission planner through my radio telemetry (hobbykings 433Mhz) modules. You can see my connection setup in the attached image… However, the Radio control lag continues to exist…
Could you please help me ?? why does this happening ??? 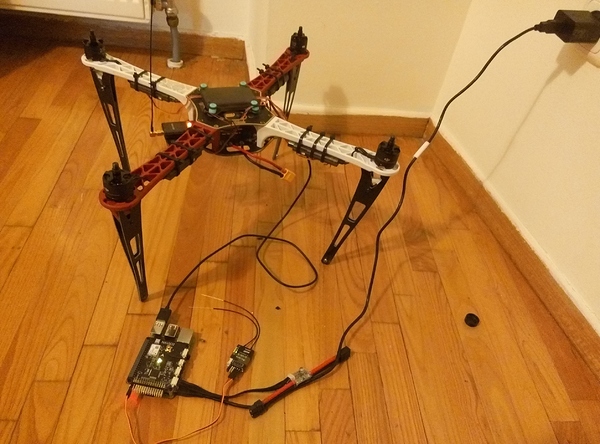 Connect an ESC with a motor to a RC receiver output with a corresponding channel number (I presume, channel 3 is used for throttle control). Check if the lag persists. This setup doesn’t need any code running on Raspberry Pi whatsoever.

here is my feedback to your proposals…

Please guide me for my next steps…

It is mission planner error in the calibration process.
It also occurs to me with the original pixhawk 3dr.
Do not give more importance.

@drone_newbie there may be a lag in passing the RC input values over the telemetry which you see in the Mission Planner, this is normal.