Is there alternative antenna for the Navio+ GPS that connects straight up from the board connector?

Interesting idea, normally avoided I think because a crash would directly damage the board. But on further examination I found this semi-rigid solution which would also solve that problem (bend out the way in a crash): 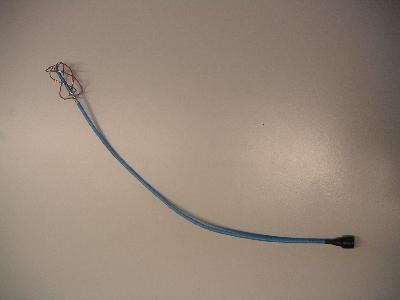 Looks like a DIY job then. Actually I’m interested too now because I’ve already bought individual SMA connectors and RG402 cable to make custom FPV antennas. You just need MCX connectors instead. But I’d try to find a web site with more specific instructions, as there are many different rigid cable types and RG402 could be too thick for GPS.

The biggest problem will be stress on the Navio motherboard and vibrations. The antenna must be super light else it could crack the board over time. Also vibrations will be exaggerated by the antenna cable and travel easily down onto the board, potentially effecting all other sensors. It might work if the Navio is mounted on gimbal balls. If the wind resistance didn’t create any significant vibration that would be the best of both worlds because then both the Navio and the GPS would be isolated. It’s hard to say but certainly something worth experimenting with!

The other option is to use a 3D printed case with the GPS stalk integrated (just load two objects into a 3D editor like SketchUp and stick them together) and a shortened cable (cut and re-solder carefully). Or the same with an off-the-shelf plastic case, plastic stalk and good glue.

It’ was a surprise for me.
I was thinking that only ceramic patches antenna would be fine

Thanks for this information

Any active gps antenna should work. The gps helical antennas won’t get as good of a position reading as the flat “patch” style. But they are more effective at acquiring a location when in off angles or not directly pointed at the sky. I think the flat patch antennas with a low noise amp will give you the most accurate and reliable position reading.