I see that as of V 0.0.4 firmware, you now appear to support the ‘moving baseline’ RTKLIB option for the rover but I can’t get this to work. Is this currently implemented and are there any tricks to using this mode?

Sorry, we did not get to it yet.

No problem at all. I’d also like to report good results using GPS + GLONASS 5Hz after re flashing the units with your V1.2 firmware and then updating to V0.0.4 for the ‘Kinematic RTK’ mode. (I had previously had some issues with V0.0.4 on V1.1 code)

I am still confused as to why I cannot see the the GPS satellites in RTKLIB 2.4.3B5 running on a PC (I can see the GLONASS sats fine and both the GPS and GLONASS sats appear on the Reach rover unit) Any Ideas?

Glad to hear that you are getting good results!

How are you streaming to RTKLIB? Maybe you do not have required RTCM messages enabled?

I have found this to be the case when connecting to both the rover and base using RTKLIB 2.4.3B5 on a PC as a TCP client, RTCM3 when the Reach units are configured for dual constellation (GPS + GLONASS or GPS + BEDOU) The base unit is configured as follows and should be providing both GPS and GLONASS measurements. This certainly appears to be the case, as when the rover unit is configured as a TCP Client I get to see this on the rover: (both constellations are present)

The RTCM stream appears within the RTKLIB PC session, but appears as: 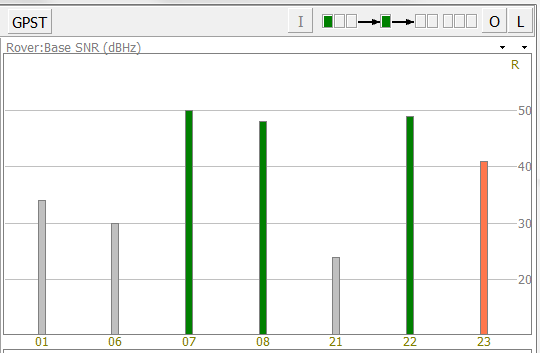 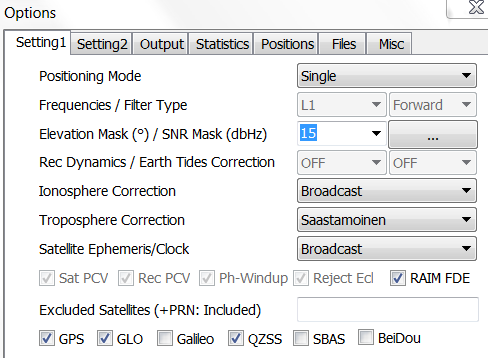 I’ve switched to using your logs for the time being which appears to work great!

Thanks for all your help.

That is weird, we will have a look.

I tried directing a base stream with similar settings to RTKNAVI and it worked fine.

After playing with the parameters a little bit, I had a moment, where I could not see GLONASS satellites in RTKNAVI even though they were turned on(Base was acting as a TCP client, RTKNAVI as a TCP server, RAIM FDE on). However, I was not able to reproduce the issue after this occasion.

Overall, messages you have turned on should be sufficient for RTKNAVI to get all the info.

This may be a really long shot, but do you, by any chance, have receiver commands saved in RTKNAVI? They may mess around with the receiver settings after RTKNAVI is connected.

You can send me a sample log via private message I will take a look at them.

After much experimenting, I think I’ve discovered the problem for this issue and other odd behavior I was having:

There seems to be some issue with using the ReachView client on my iPad (Air 2 with latest updates) in two different browsers (Chrome & Safari) where both browsers appear to retain old cached data in some circumstances. This odd behavior was subtle at first, but when I re-flashed the units yesterday during testing, and updated the firmware upto V0.0.5, I found that the RTCM message options didn’t initially show all the available settings and other elements of the GUI had similar behaviors where the interface would work but parts were missing. Since switching to using Chrome on a Win7 PC appears to have resolved the issue for me.

It now all appears to work fine - thanks for all the good work!