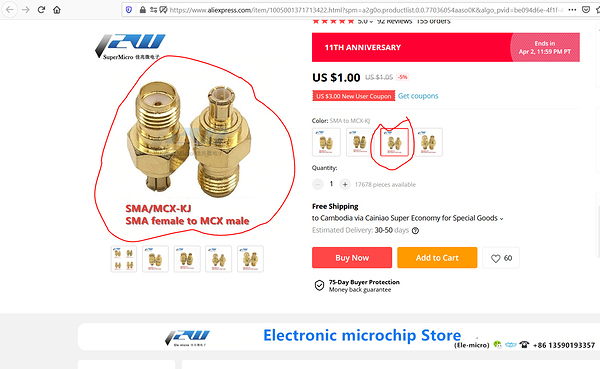 My question is that does anyone here bought the correct version to the converter/adapter or know the specification for M2’s MXC port?

not an adapter but a cable. I am guessing the body of the adapter will not let it go in far enough.

Yes, it could not go far enough. So we could only use the cable from Emlid store?

yes or they can be purchased elsewhere. I got one from Amazon

I had the same experience with those connectors they worked but would pop out easily.

MCX male plugs for cable ends that fit are easy to find, but I have had a lot of trouble finding suitable MCX male ends when sourcing SMA adapters. I spent hours prowling Aliexpress, Ebay, Amazon, and local suppliers, bought and tried a few different models, but haven’t found something that fits in properly.

The opening on the M+ plastic case is 5.3mm diameter and the smallest MCX/SMA I found has an exactly 6mm base. It is frustratingly close yet doesn’t fit.

The straight cable worked fine, the 90 degree MCX would not stay connected. This is the one I was speaking of in another thread.

Yeah, I tried the 90° MCX at first, it was evident it would never work. I was looking for a single fitting, not a cable, so I bought 10 of these. The big TNC cable I had required me to get a RP-sma female.
Since I have a bunch, I will try to mount one in a drill chuck, spin it like on a lathe, and grind it a bit thinner with a Dremel.

I want to avoid doing that, trying to preserve warranty.

want to avoid doing that, trying to preserve warranty.

The warranty is only 6 months. My system design won’t even be finished in 6 months.

Besides, it is inconceivable to me that a company like Emlid would totally void a warranty because a user modifies the case.

I butchered my case.

But I like the idea of modifying the $5 connector. If I can do it, that’s what I will do next time.

If the Reach M2 case is opened, the hardware components become more vulnerable to external damage. After that, the unit behavior becomes unpredictable. So, it’s hard enough to troubleshoot any possible issues you may face. That’s why we usually don’t recommend opening units.

Reach M2 receivers with manufacturing defects are replaced if reported within 60 days from the moment of purchase. Also, we provide lifetime support for all Reach devices. If you face any issues, please contact us. We’ll help you determine what went wrong.

On the M2 I have also switched to having a short straight cable at the start, saves wear and tear on the M2, have not noticed any drop in performance. Now the sma converters snap!

Also gives another release point if it gets hooked on something.