I am part of a UAV lab NIMBUS lab. We were looking to equip our fleet of UAVs with RTK systems. I am currently evaluating them. We are located in Lincoln, Nebraska, USA.

The first challenge we encountered was not being able to setup Wi-Fi using Windows 10. A Wi-Fi connection was setup using VMWare and Ubuntu while following the steps from this site: Intel Edison. We use a ZyXEL router as an IP address distribution device.

An Odroid XU4 attached to an Ascending Technologies Hummingbird running ROS nodes is used to pass data from/to the rover. It was assumed one could use the micro-USB connection between the Reach and the Odroid. After discovering that was not the case, a uart-to-USB connection was used to connect the Reach and the Odroid. Radios used are paired XBee Pros connected to SparkFun USB boards.

Yesterday the rover device became unreachable twice, this happened once today as well. I unplugged and replugged the USB device each time and eventually was able to access ReachView again.

While testing near soy bean plants with a clear sky, we had low GPS signal strength with at most 2 satellites reaching a green ReachView level at one time. Screenshots from those tests were not taken. The Reach devices are several meters apart during our most recent tests. The antenna from the Reach kit is attached to the base Reach device with no additional amplification and placed on the ground during the tests. The following ReachView screenshots were taken from a space where members of the lab routinely fly. The space is relatively close to our lab. 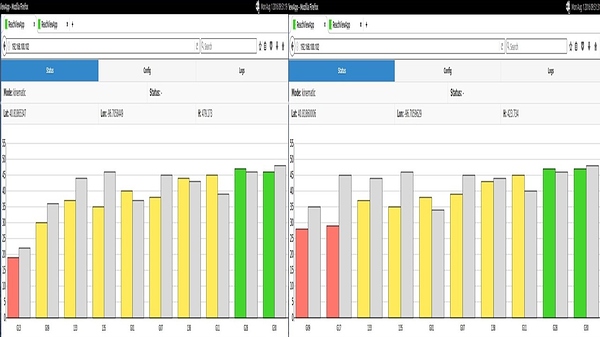 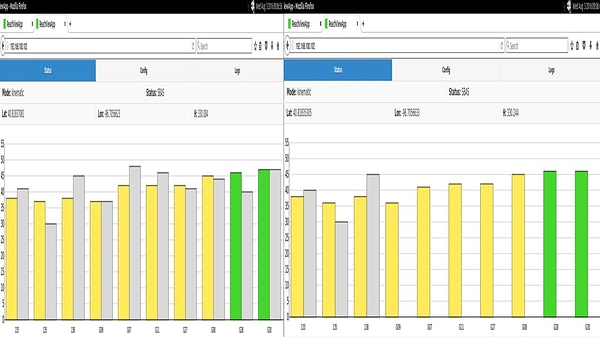 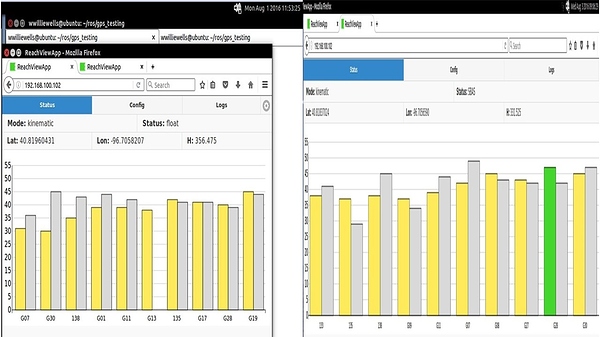 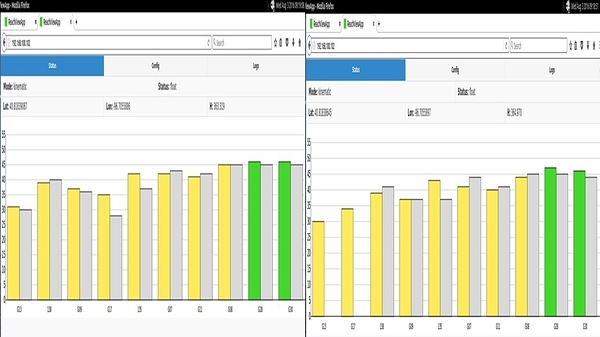 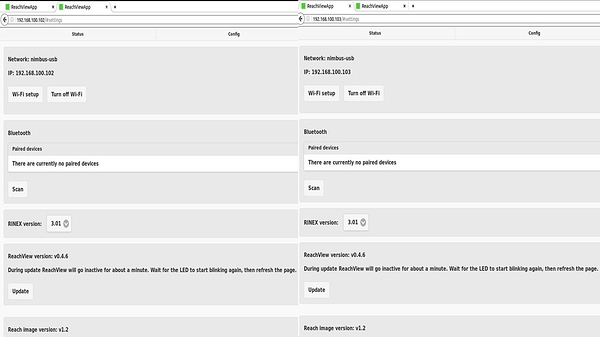 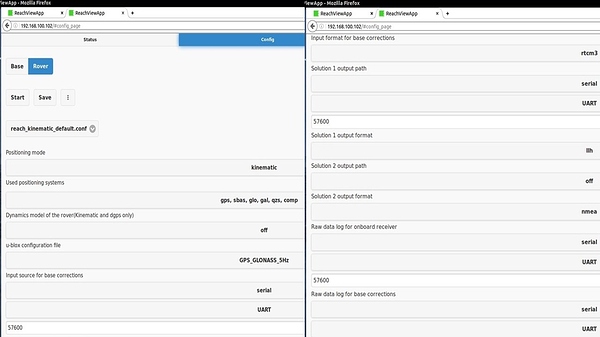 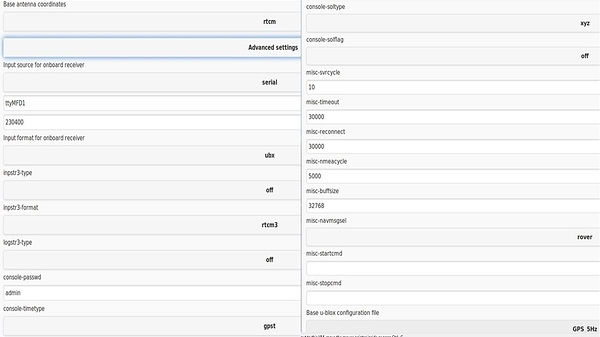 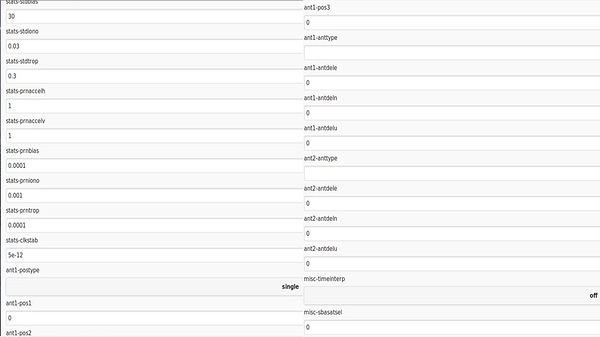 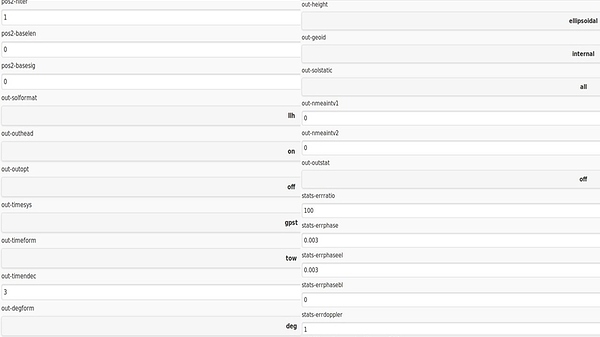 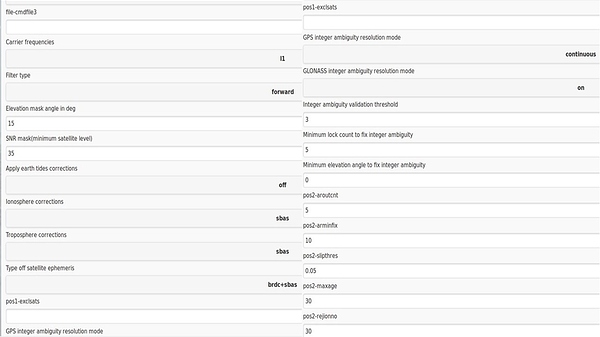 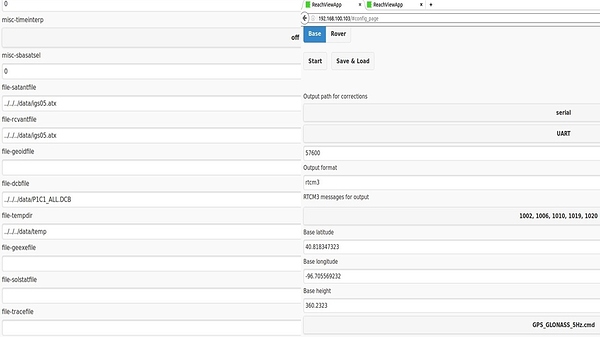 Here is a link to the UBLOX protocol. Someone on the forum wanted to decode ECEF.

Am I right that the ground plane is at the top, right side in the picture. It barely pokes out past the antenna if that is the case.

My smallest ground plane is currently 80mm and I am planning to make that one bigger according to the recommendations of people that are smarter than I.

The rover antenna is right now just loosely mounted on a 3D printed PLA thermoplastic surface. The tests conducted so far have all been flightless. The other GPS, the one connected to the AscTec vehicle, is a u-blox lea-6. It is located at top center of the image. The antenna wire in the center top of the image is connected to a Futaba 7C receiver.

The 2 Reach antennas were approximately 5 meters apart during the 04Aug16 tests.

So there’s your problem with low SNR. You need a metallic ground plane directly underneath the antenna. Once you do that, you will see a magic signal boost in ReachView.

There is also a good chance that Odroid is producing EMI on GPS frequencies, you can try moving antenna away from it and see if that helps. @bide is also right about the ground plane.

I was able to get the 2 Reach units to communicate to each other and received decent Fix results. I placed both of the devices on the vehicle at different ends. I setup one device as a base and one device as a rover.

I was not able to get the Reach devices to talk to the Ascending Technologies Hummingbird though. I believe the issue was that proprietary software on AscTec’s end processes GPS data.

The following is link to what I wrote for my Master’s about RTK GPS systems Master’s Project RTK GPS.

This link is to a post I wrote on the NIMBUS Laboratory site regarding inexpensive small UAV size RTK GPS systems: RTK-GPS-for-UAV.

I would like to wish Emlid success in their current and future endeavors as well as the other professionals on this forum. I completed my Master of Science in Computer Science this past December (2016). I am currently looking for employment, if anyone knows of an opportunity that would be appreciated. I am willing to relocate anywhere.