Thanks to everyone that helped me with my earlier questions.
Once I was able to input a “-” to let the device know I was in the western hemisphere I obtained a fix relatively quickly and it held pretty well through my survey. After getting back to my office and dropping the points into a GIS I found the points are off, but they all appear to be off the same distance and direction which leads me to believe my manual coordinates were input incorrectly.
I converted Lat Long to DD again and found out I had used an extra digit at the end of the Longitude string.
I have included the control point information and a screen shot of what I had input into Reachview for my base position as well as a shot of my points and arrows that illustrate about where the points are in reality. As you will notice, the trend is the points are off in the same direction and basically same distance from where they should be.
thanks for any ideas you may have and let me know if you need any more information. Emild Question 12-22.pdf (550.4 KB) Fairfield - Thiel Park control.pdf (98.7 KB) 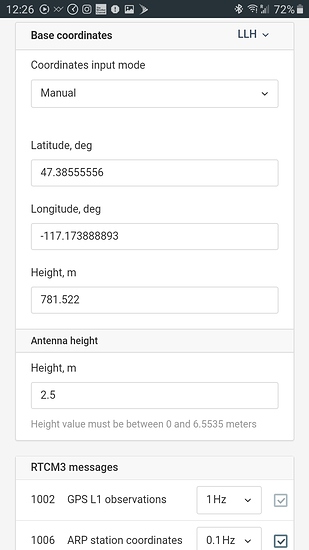 You can post process using RTKLIB using a true Base coordinates and raw data from Base and Rover, you can find how to do it in this forum.

I don’t believe I need to post process as I input the true base coordinates manually and ran RTK and received a Fix on my Rover. I question may have been confusing.
I uploaded the data sheet for the control point and information I input manually in case anyone sees that I did something wrong.
If everything is correct the unit is incorrectly fixing on points. Related I shot some of the same points earlier with only a Simple solution and they were much closer to reality. I believe there is a simple explanation but I have not come up with it.

I’d suggest you drop that of the base coordinates into the GIS software to be certain it shows exactly where it should be on the ground. Most GIS softwares have some variations in positions ±3 metres mostly(remember the satellite image the GIS software is feeding you has not been georeferenced to meet your localization needs).

@lonottosen I think there is a problem of projection, REACHVIEW accept only WGS84 coordinates and you have a NAD83 coordinates (it use a different Ellipsoid GRS 1980) I think you need to transform your coordiantes first from NAD83 to WGS84 before.
Converting that I have found 47.3855618,-117.1739028.

Hi Lonottosen
Zinou is right and furthermore, you use as base point an elevation marker. According to the datasheet, the accuracy of horizontal coordinates given is 6 seconds of arc, that is 185 m.
A display of 1 second (without decimals) is already 30 m.