Large difference in height, side by side

I set a base point using 2 minute averaging,
The rover which is sitting 1m away from the base shows height differences of 200m, and it is changing rapidly.
Can someone point me to what other settings to check. Maybe do I not have god enough signals on the receivers. AR validation ratio is 1.1. what should that number be?
Thanks 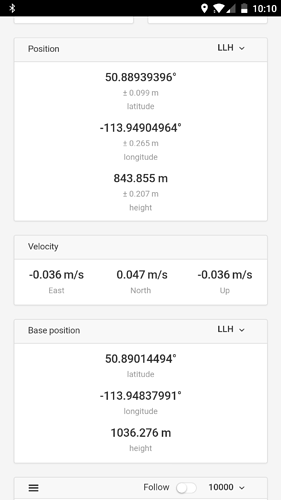 At 3.1 AR Validation Ratio Solution will turn to fix. What is your age of differential? Also, try moving them a little further apart. Somewhere I read they should be two metres apart. Not sure if that makes a difference. Could you post some more screen shots of your settings and status?
Are you using Lora or Ntrip? Screen shots will show us which data you’re sending over correction link and what your update rate is.

Hey Brent,
I’ll try to separate them out a big more. Not using Ntrip, but yes using LoRa, age of diff was like 0.7 ish.

I’ll try again this afternoon hopefully, i might have been in an area blocking a few sats.