Hi,
same compass issues. I also have the external one from emlid. compass one external reads x-159 y-435 z:57
internal #2 reads x-100 y173 z-22. getting very near the same readings whenever i calibrate. but now I’m also getting drift in the yaw axis which i wasn’t ( as i type, this has stopped drifting). Both offset sets of values are green when I’m using only usb. external compass is yellow when using battery power. warnings in prearm are inconsistent compasses.
I installed adrucopter and navio2 directly via the installation documents. At a real loss here as what the next step is that I should be taking.

I also have the external one from emlid

Sorry, I don’t follow. What do you mean under ours’ compass? Navio 2 has two internal compasses.

Inconsistent compases error usually implies wrong rotation. Have you set any? You don’t really need to do that anymore in the latest releases.

Please, would you be so kind to make a screenshot with calibration tab, so I could grasp what all the fuss is about. 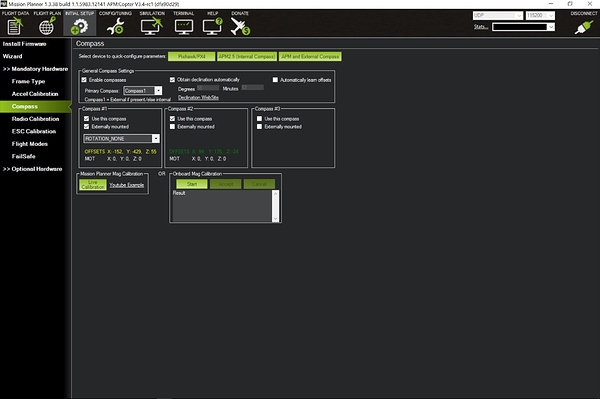 Uncheck Externally mounted on the first pane. That should be it! 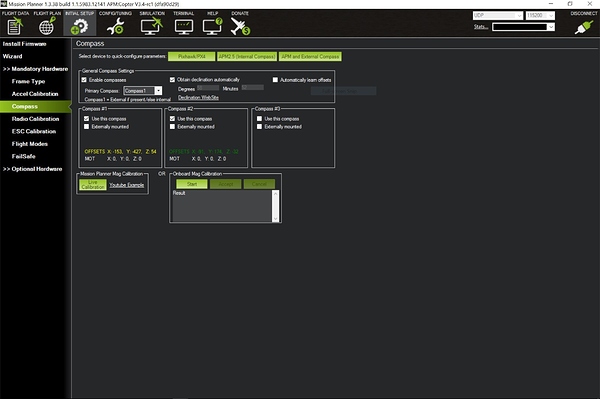 Wildtypitch:
I also have the external one from emlid

Sorry, I don’t follow. What do you mean under ours’ compass? Navio 2 has two internal compasses.

Have you followed instructions for Navio 2 (sudo apt-get install apm-navio2?).

Could you also please erase parameters (sudo rm -r /var/APM) and try again the onboard calibration without any external compasses attached and rotation set.

Sorry being and idiot about compass, it’s a gps unit not compass. 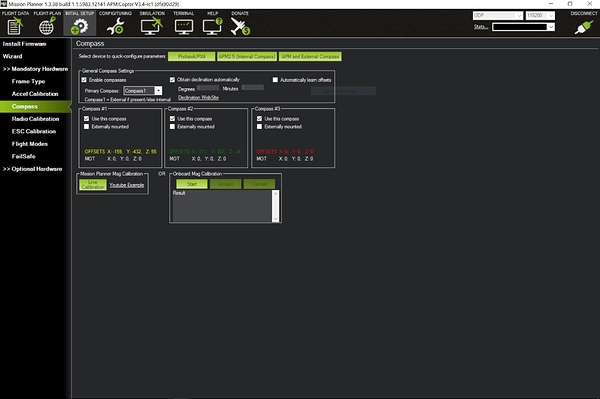 Please use the “Onboard Mag Calibration”, not live calibration. Related to Mission Planner issue.

ah yes that works, thanks guys! much appreciated.

I was playing around so i probably made that selection. I believe one compass has a higher range/gain (sorry can’t remember the term) resulting in bigger offsets than the other. That may or may not have benefits. I’m out of my depth, going up for air.

Hi guys.
I’ve recently installed apm-navio2 deb, it works well except MP determines only one compass. Have I missed something?

So, I am getting the “PreArm: Inconsistant Compass Error” after doing the Live Calibration which at the end of the process, there are zero errors for Compass 1 and 2 and 99 errors for Compass 3, which I would expect, as it’s not present.

That said, here is a screenshot of attempting the Onboard Mag Calibration, which does not appear to work. 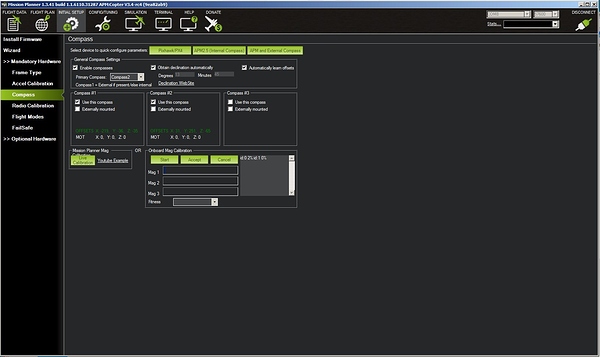 And the error message on the HUD 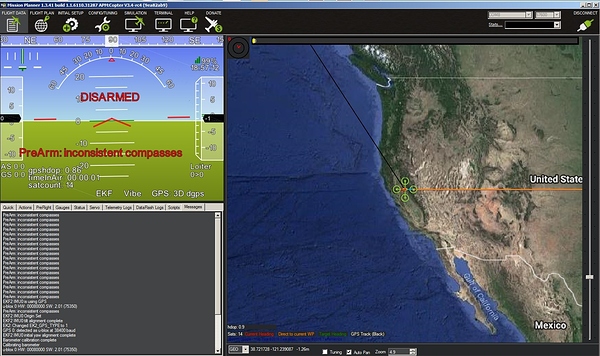 What I did find, as a workaround, is to disable Compass 1 and only use Compass 2. No more inconsistent error message.

What is the downside to operating with only one compass?

inconsistent compasses usually occurs after compass calibration before you reboot; after reboot it usually vanishes;
afaik apm uses only one compass for navigation; (he only gives you inconsistent warning that compass-readings differ from one compass to the other)

Regardless of numerous reboots after the calibration step, as long as there are two compasses selected, the inconsistent compass error message appears. At least that has been my experience. Disable one of the compasses, and using only one compass, either Compass 1 or Compass 2, the error is removed, as there is nothing to be inconsistent with.

That said, with this setup, is there a need to use two compasses or is using only one going to be sufficient?