How to setup RTK base station using GPS values from android to acheive float & fix over reach emlid M+ as rover reciever?

Hi i have been using data from “Share GPS” app on android to provide NMEA data over TCP to str2str, so that i can use it as a base reciever & reach emlid M+ as rover GPS reciever.
First of all i formed a tcp connection over RTKLIB to recieve gps data. I have been able to recieve this by using str2str.
Command line:-
./str2str -in tcpcli://:@192.168.xx.xxx:5005#ubx -out ntrips://:BETATEST@rtk2go.com:2101/Dude790#rtcm3

And shared this data to NTRIP caster by str2str acting as an server in RTCM3 format.
NTRIP Caster details as input are as follows:-
Address = www.rtk2go.com, Port = 2101, Password = BETATEST, Mountpoint =XYZ (word set to be unique )
Correction input details can be accessed from NTRIP caster.
Correction input details are filled in reach interface, these details are to be same as is filled for NTRIP Server. 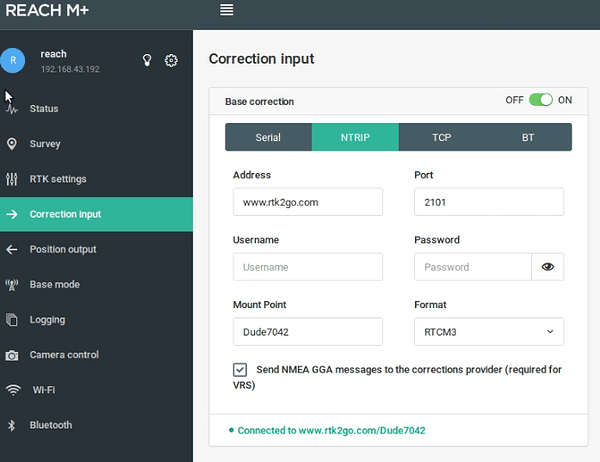 Successfully connected to caster.
RTK settings will be like- 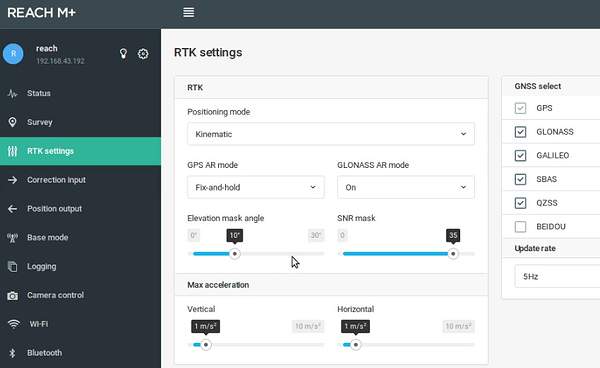 I assume that i am able to connect to NTRIP caster because i am seeeing “connected to rtk2go.com/Dude7042” but i am not able to achieve fix. To get RTK solution it must have acheived fix or float (initially) as solution status, but it is still getting Single. Also base station data is not showing on stats.
Survey console shows as below-

As you don’t have the grey SNR bars next your own units bars, I would suspect there is something wrong in the NTRIP setup (or that pipeline in general).

In the correction input under “Connected to…”, you would usually have a down-arrow, that allows you to expand, and see the types and counts of message being sent. I don’t see that under yours, can you confirm that?

thanks for your response @wizprod

As I can see, there are no corrections transmitted from the NTRIP caster. Try to output it to file and check if there are any RTCM3 messages.

Hi @tatiana.andreeva , I am not able to get data output in RTCM3 format into a file, Although data can be stored into file, in the same format as is the input provided. (i.e NMEA data

). I think it is not converting data into RTCM3 format.

Please can you confirm if NMEA data can be converted into RTCM3 format using str2str???
if yes, is there a problem with the input data or am i missing something…

Thanks @tatiana.andreeva,
Actually i was in a hurry to check base station implementation using android, so skipped this one. I thought NMEA would work with RTKLIB, but i was wrong .
so now, i think i would have to use a GPS base receiver in place of an android app , As most apps provide only with NMEA data.