How to Place Ground Control Points: Tutorial by Emlid

Ground Control Points are vital when it comes to accurate drone mapping and surveying. GCPs are known points placed on the survey site to act as reference points in post-processing. When “stitching” the drone pictures together, GCPs are the markers that help you make the final model more accurate.

However, placing GCPs is a tricky deal that always brings up a handful of questions. How many do I need? Where should I place them? How should they look? Everything you need to know about placing GCPs for accurate data collection is in this video.

Check out the basic rules for Ground Control Points in the fresh Emlid tutorial:

If you want to be updated on new educational videos and tutorials subscribe to the Emlid official YouTube channel. Never miss a single thing!

Do you have any GCP tricks and tips of your own? Share them below in the comments to give a helping hand to your fellow surveyors.

Orange and blue garage tile quads are the best GCP’s I have found, but the most cost-effective and convenient or orange Home Depot five gallon bucket lids.

Set your gcps in the coordinate system that your final product is going to be exported to. Trying to convert the final product from wgs84 to cartesian is not fun especially when there are scale factors involved.

When you are setting the gcps make sure that there is nothing within a meter of the centerpoint. I have seen other contractors and mappers make a flagging fence around the point which seems like a good idea, but you can actually see the curvature of the profile in the model inside of that fence which obviously is going to affect vertical.

Orange and blue garage tile quads are the best GCP’s I have found, but the most cost-effective and convenient or orange Home Depot five gallon bucket lids.

I just started to use GCP’s when drone mapping … all my previous missions had been flown with just native DJI Phantom 2.0 exif gps data but they were not accurate enough for my purposes (personal not professional)

I set up various GCP’s with two M2’s last weekend, the base over a local known point, and the GCP’s the size of a piece of typical paper. These were placed in locations where I could more easily find them in a photo taken from 150ft (0.5in/pixel) and even then it wasn’t easy. The below example shows the GCP set on a stump right next to a 10ft rock for example … and yes the blue/yellow come to a point in the center but you cannot see it in the photo. 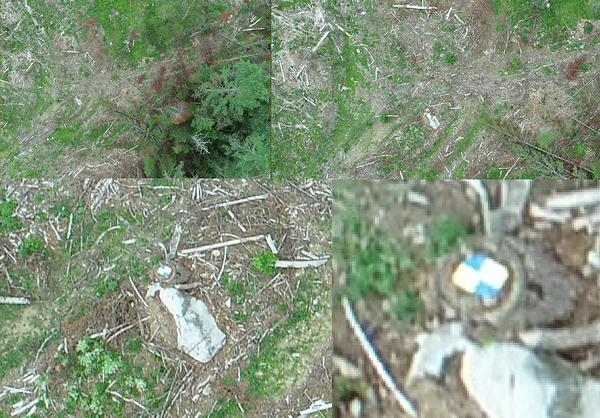 I am not using any paid services/software to process my drone imagery so my process involves importing exif data into QGIS (photo icons seen below) along with my GCP. I style the GCPs to indicate roughly which photos contain them, then open those photos in GIMP, captured the x/y data, and saved that all to a flat file used by ODM (which is still running having had to restart it last night) 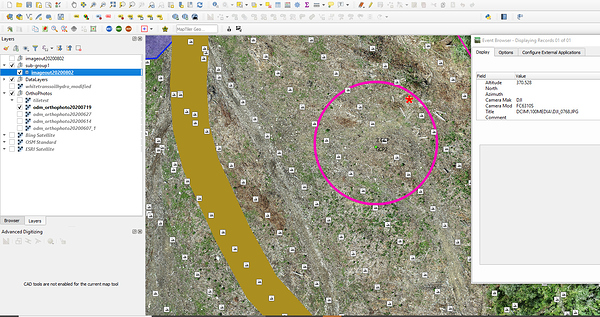 ODM offers ways of making the GCP file easier but sadly I can’t run docker on the machine I use to process my drone footage so I use a manual method for now as scripting might not pick up on a GCP this small.

Stumps are actually great since they stick up. I just want to be careful of not getting anything higher around the GCP.