I have recently purchased a Navio2 and have followed the guide in the docs setting it up on a Raspberry Pi 3 B with the latest version of Raspbian from the website. However when trying to fly it I have issues in the GPS flight modes. They work well for a short period of time before the GCS(QGroundControl) reports a GPS Glitch and the drone proceeds to fly very quickly away in seemingly a random direction. During this time I appear to have little or no control over the drone and emergency stop commands from the GCS do not lead to any action from the drone. Luckily I have had a string attached to the drone so am able to pull it down to the ground where it eventually seems to respond to the GCS and either emergency stops or reports a crash and stops. I have struggled getting any logs of this as it doesn’t appear to successfully record any in these circumstances. I can only get logs from flights that I complete without using GPS modes.

I have tried running the drone on the floor without the propellors on for sometime with the following being the list of errors reported by the GCS:

I have also used u-centre to monitor the drones GPS and it appears fine with a good 3D fix until I receive a GPS glitch and the u-centre data then just freezes until the glitch clears.

I am wondering wether this may be a hardware issue with either the Navio2 or the GPS as I have followed the getting started guide accurately. I’ve tried fresh with a new install on a separate SD card.

Any help anyone could offer would be much appreciated.

I have now managed to record a log. It shows a flight where the issue has occurred if you look from about 12:13 onwards. The position of the final crash is at 12:15:43.

It’d seem that we’ve been in touch over email regarding this topic. Let’s continue our discussion here so that other users can participate in it as well.

From the log files you’ve shared over email, it’s possible to see that the vibrations that you get are pretty high. They might affect the overall performance. I’ve attached the screenshot below. 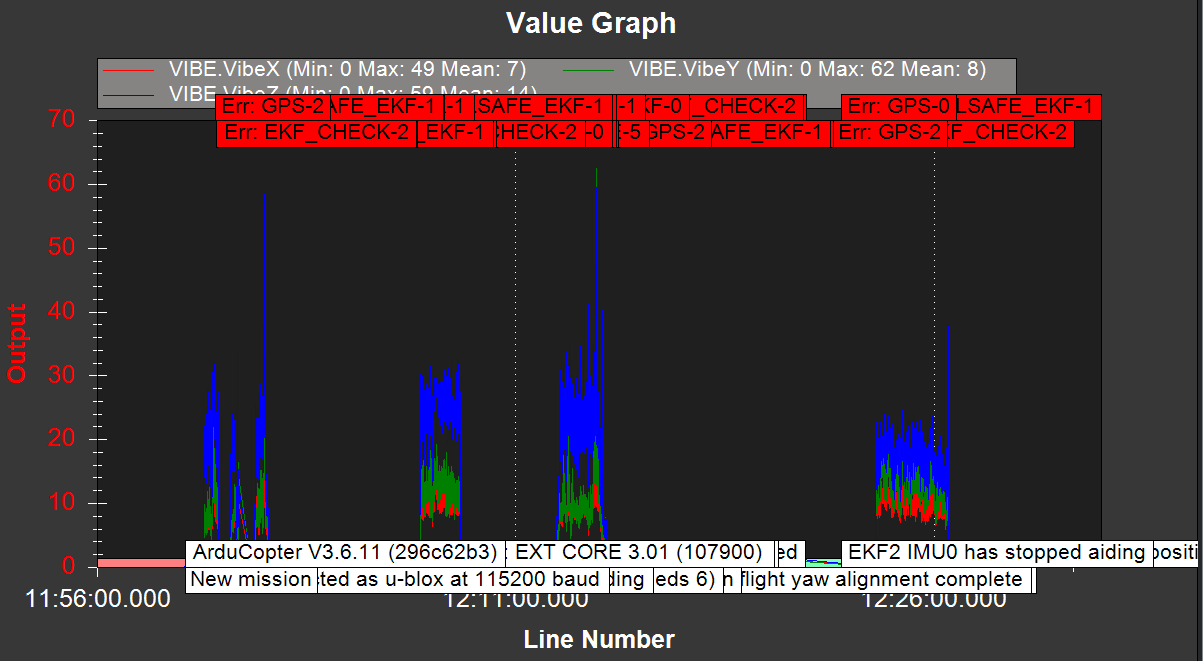 From the photo of your setup, I assume that the Navio2 is put on your plate without any anti-vibration setup. May I ask you to check out our anti-vibration mount? This might help you reduce vibration.

Also, it seems that the noise from the motors affects the antenna as it’s placed so near them. Would it be possible to test your setup with the antenna placed above the main body of the copter? Please place it on the ground plane as well.

Following your advice I have now raised my GPS antenna above the quadcopter. I have also shielded the cable. Here is an image of the build now: 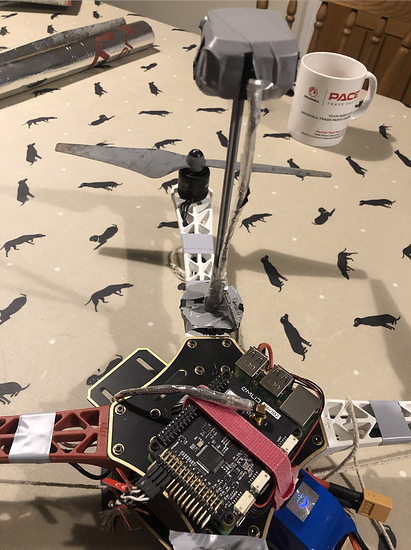 We took it out for a flight today and it no longer takes itself rapidly off into the distance, however I still have been having some GPS Glitches although less frequently. It also doesn’t hold its position correctl in either position hold or loiter. With loiter causing it to become really quite unstable although I am still able to maintain control. We tried flying it to a GPS point but and it moved in the right direction however very very quickly and due to this it lost height rapidly and hit the ground. Have you any idea why it might be doing this. The only log I was able to capture from about 5 flights can be found here: https://plot.dron.ee/5mij

Carried out another set of flights today. Tried Alt-Hold mode and after a minute of so it kept its height pretty well. I tried some auto-tuning and this corrected a lot of the position drift issues in stabilise although flying for quite some time the logs indicate the autotune didn’t complete its process. How long should this normally take?
I am also still having issues with GPS modes. Position hold works for a few seconds and then drifts slowly off in a forward direction for about 10meters before flying very rapidly back trying to correct itself and crashing into the ground within seconds. It reports GPS Glitches during this. Here are the logs: https://plot.dron.ee/w8Pc https://plot.dron.ee/tcNE

I don’t think it is necessary to shield the cable of the antenna. The cable should be already shielded.

I would go for vibration issues. Maybe the antenna mast introduces a lot of vibrations and there are many cycle slips as a result.

The way you have mounted your flight controller is also very uncommon. I think you should mount it with screws and add a vibration isolation.

The huge metal plates of the flamewheel do introduce a lot of noise if you use them for power distribution. This could be another source of your errors.

I’m also looking to solve a similar problem. I experienced GPS glitches with my Navio2 and arducopter 4.0rc1 or 2.

I had a flight today with 4.0 and had a GPS glitch when doing a slight banked rotation.

With 4.0rc1, my Gps antenna was at the end of a long mast and I had heavy vibrations. With a shortened mast, vibration level is better but GPS glitch is still present.

There was an EKF failsafe event: it entered a Land sequence (GPS glitch not cleared). I changed flight mode to stabilize and had RC control.

Although vibration may cause issues I’m not sure they would cause a result this dramatic. As I said the drone flies perfectly stable in stabilise and Alt Hold so I can’t see it being caused by vibrations of the NAVIO2 Board. It could I suppose come from vibrations of the GPS antenna but I’m not sure how much I can do to help that in its position. I have looked at the information from the GPS in u-centre and there are no issues with the GPS apart from when the GPS glitches and then it just freezes the data stream until the GPS stops glitching. So I can’t tell if there’s actually any issues with the amount of satellites etc.

I could try raising the GPS higher to get it further away from any interference as this has already caused a large improvement and the drone now doesn’t have random reported changes in position but is it possible I just have a faulty board or antenna? Surely a lot of people have a similar setup with the flamwheel kit and have no issues.

I could try raising the GPS higher to get it further away from any interference as this has already caused a large improvement and the drone now doesn’t have random reported changes in position but is it possible I just have a faulty board or antenna? Surely a lot of people have a similar setup with the flamwheel kit and have no issues.

My experience is that vibration is a bigger problem then interference if you have a minimum shielding. I just put the antenna on an aluminum sheet 5 cm above the Navio and do not have issues. But I did have issues with vibration including fail safe landings (not on the same copter).

If the vibrations on the NAVIO2 board were causing issues with the sensors, then I guess this would show in non-GPS flight modes?

Sorry for the delayed response!

From the logs you’ve uploaded, I can see that the vibrations are still very high. I’ve uploaded the screenshot. 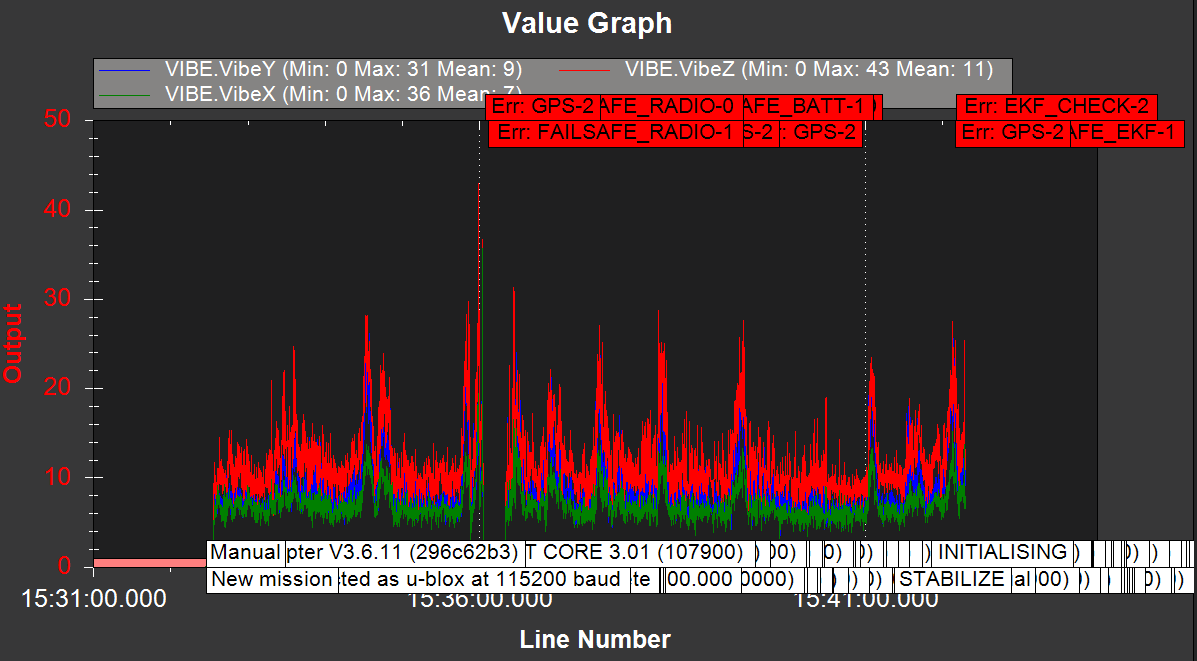 I’d agree with Tobias that you need to place the antenna on the ground plane.

Would it be possible to record the dataflash logs without the propellers so that we can evaluate the vibration level?

I have taken your advice and lowered the GPS antenna to just above the NAVIO2 on a aluminium foil platform. I have also reattached the Raspberry Pi using a number of foam sticky pads to attempt to reduce the vibration. Pictures attached. I then run it inside on the ground and here is the log file: https://plot.dron.ee/uXrt 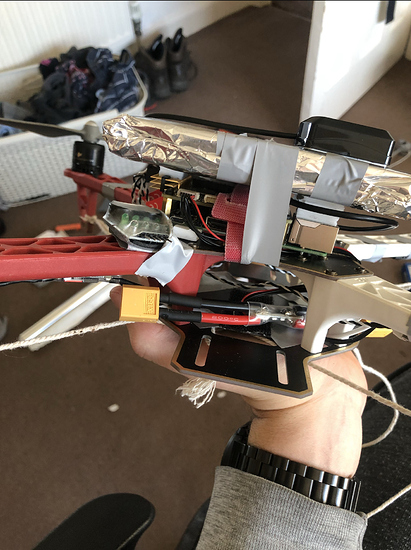 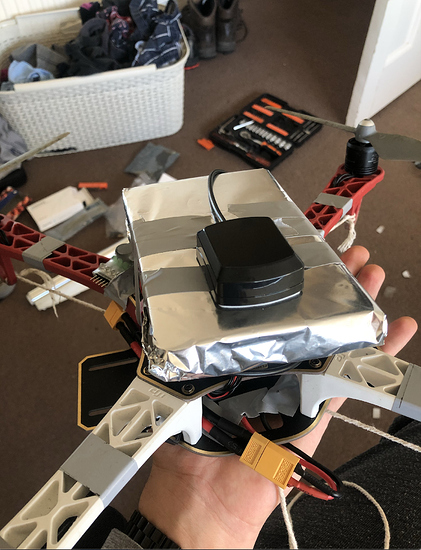 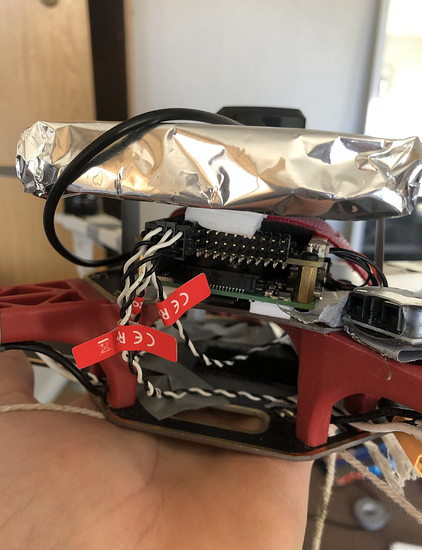 At the log you’ve sent, the vibrations are minimal. I’ll attach the screenshot. 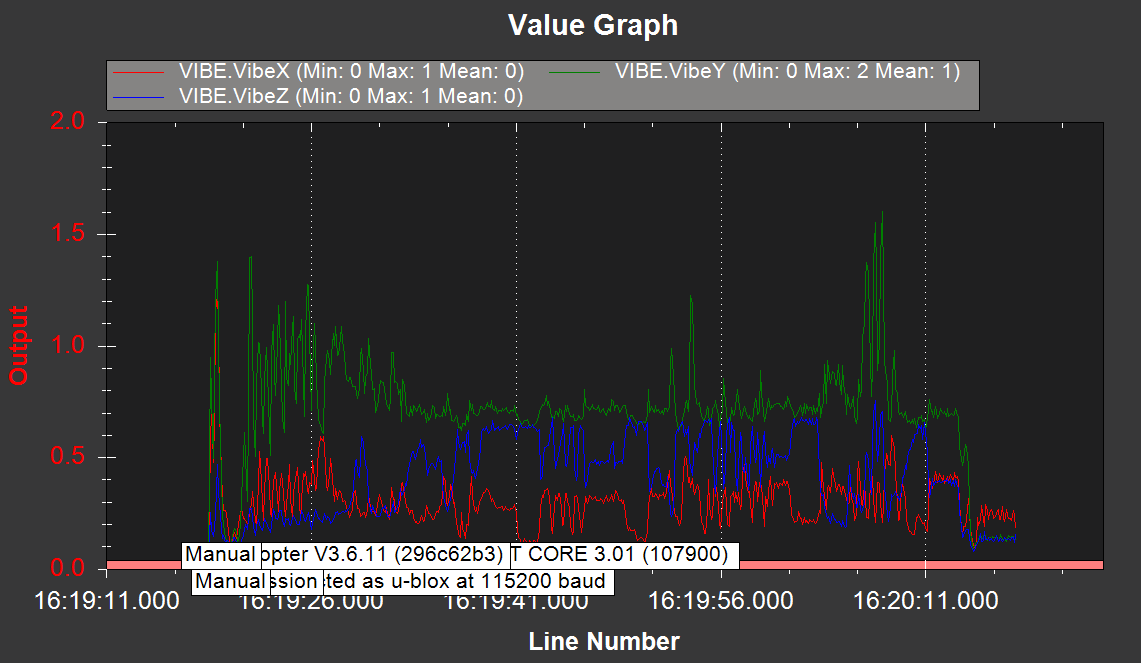 I’d assume your board is not isolated enough from the propeller vibration influence. I’d strongly recommend you take a look at some damping solutions, for example, our anti-vibration mount.

Also, regarding the antenna placement, it’s better to use a metal ground plane. It provides better shielding and multipath reduction. Please, place your antenna a bit higher up from your board.