I am using GeoSetter to tag photos from a drone mapping mission. A number of the photos are tagged with the wrong geolocation and I am looking for help troubleshooting this problem.

Welcome to our community!

Thank you for such a detailed description of the issue.

I’ve conducted a test with our dataset but couldn’t reproduce the issue you face. Could you please tell me if you use the same settings as described in our guide? We tested these settings and can confirm they work fine.

An explanation of how GeoSetter matches photos to locations would be helpful.

As I know, GeoSetter matches the coordinates and photos by order, so there shouldn’t be any issues from this side.

Thank you for your help!

I added another set of screenshots to the drive folder shared above showing a pix4d project with all images, as well as screenshots of my settings in geosetter. Let me know if that gives you the information you need.

I am pretty sure I followed all of the settings in your guide the first time around, but I decided to re-do the process just in case. Screenshots showing all of my settings are in the drive folder. I had better luck for this second attempt, but still had a few weird location tags. This time four of the points had negative latitudes. In the image properties editor in pix4d I deleted the negative signs for the latitudes of these points. This moved them much closer to their correct locations, but now they are 2 drone flight passes over (see screenshots). The problem images are spread through out the flight.

Thanks for the test! I’ll look into the settings and results and write back.

I converted the events.pos and events.gpx files to .kml and opened them in QGIS to check if the positions were shown correctly at this step. It seems that everything is fine: 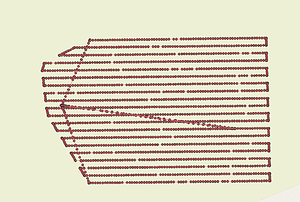 For now, it looks like the issue occurs at the GeoSetter stage. GeoSetter is a 3rd-party app, so I can hardly comment in detail on how all the settings chosen in your test could affect the solution. We used standard settings for our tests, and the data was processed fine.

I’ve noticed that when you uploaded the events.gpx file to GeoSetter, it was identified as 2 tracks, not a track and waypoints as in our guide:

I converted your events.pos file to events.gpx in our version of RTKLib to check if something might go wrong at this step. When I uploaded the obtained events.gpx to GeoSetter, it was shown as 2 tracks as well. It’s hard to say if it may influence any GeoSetter algorithms, but it looks unusual. I’ll discuss your case with the team and get back to you.

Thanks for looking into this! I agree that the problem seems to be in GeoSetter. I am working on other methods of geotagging the pictures (exiftool, python). I’ll write back when I have something to report.

I’ve double-checked the data from Reach and haven’t noticed anything unusual that can lead to improper geotagging. You may consider discussing the issue with the GeoSetter support to find out what can be wrong. We’ll also try to contact them regarding this issue.

If you had a chance to try other geotagging methods, I’d be glad to know if the data can be processed fine these ways.

Thank you for taking the time to double check this and help trouble shoot the issue.

After fighting with various exif editing solutions for way too long, I discovered that I don’t actually need to geotag the photos. Pix4D accepts photo locations in the form of a csv file (see https://support.pix4d.com/hc/en-us/articles/204424015-How-to-geolocate-the-Images-so-that-the-Geolocation-is-imported-in-Pix4Dmapper and https://support.pix4d.com/hc/en-us/articles/202558539-Input-files#label2).

Thanks for coming back with an update! Yes, this workaround is possible, although it can take some time to accomplish.

We still haven’t received any update from the GeoSetter support. We’re working on possible solutions which can simplify the workflow of mapping and geotagging.

I’m back with the great news about the latest release of the Emlid Studio. We’ve implemented a geotagging feature with a simple workflow in Beta 9. I suggest you try it by yourself and share your thoughts on it:

Hello everyone! Check out the new Studio 1-beta-9 with drone data PPK mode! Now Studio can add coordinates to images’ metadata. All you need is events.pos file and folder with photos. events.pos will be generated during the Processing step but if you have this file already then skip Processing and proceed to Geotagging right away. [image] [image] macOS: Emlid_Studio_v1-beta-9.dmg Windows: Emlid_Studio_v1-beta-9_Setup.exe Check out the full list of changes below. Added: A brand new dr…