I have a NavIo+, a Channel FlySky FS - TH9X 2.4G 9 Channel Transmitter and a FS fly sky model n:FS-R9b receiver.
The receiver has no ppm output (?).
I read in the navio+ documentation that i need PPM decoder or SBUS to PPM converter.
Is there someone with example on how to set this configuration?

Hey @Tore_Gard you will need to use a PPM encoder module… I have a similar transmitter and receiver (Turnigy 9X)…
Here is the PPM encoder I’m currently using.

After more document reading on the older Navio version,
I understod what I needed…It was well documented with pictures…

Hopefully this also will work…

How do you feed the receiver with power?
My PPM encoder has 8 contacts gong to the reciever. The first contact is marked ‘1’ and has a red, white and black wire. Contacts 2-7 has only a white wire (signal).
Shall I put the red + and black wire from the contact ‘1’ into the receiver power input?

I read some place else in the forum that I can not power the receiver from navio+…? 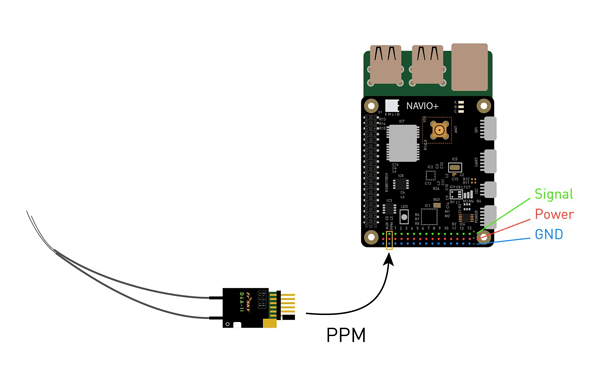 Hmm…after this experiment the Navio+ senors seems to stop working. Do not manage to connect apm planner any more…

You could use the FS-IA6B receiver which does have PPM output.