Have today started looking at Reach RTK. I acquired a pair of Reach units from a contact who no longer wanted them. They are brand new in box units. I went through the step by step process to update the firmware and reach-view version on both units etc. I set one up as a base an the other as a rover - found some temporary ground planes and got them running outside.

My initial trouble was the base unit had reasonably good satellite acquisition but the rover did not. After a lot of moving and experimenting I placed both units on the same ground plane and wondered why their satellite readings continued to be so different. I swapped roles between the units - ie I made the base the rover and the rover the base and I noticed straight away the good signals had now swapped to the rover and the base signals were not good. I then swapped power supplies just to make sure it wasnt that. Finally I swapped tallysman antennas between the unit and the problem followed. I mucked around with the antenna connection but it all looked good and to no avail.

Please see images - Image showing location of antennas and difference on screen (please excuse my ‘ground plane’ it was something close by that was big enough for two units). Screen shots show resultant satellite reception - the only difference between the two is me swapping the antennas between the two units.

So my question is - could this be a faulty antenna?? If so and I need to replace - is there a better unit I could purchase to work better at my location in the southern hemisphere (New Zealand)?

On a side note - using Ublox M8N GPS units with generic antennas on other equipment - why is there such a difference in the number of ‘locked’ satellites - from my experiment today it looks as if I get about 7 (from Reach View) and with the generic units we are cracking on with 18-20 /9as per Mission Planner)? Is it a signal quality filter or something?

Really appreciate the help - many thanks 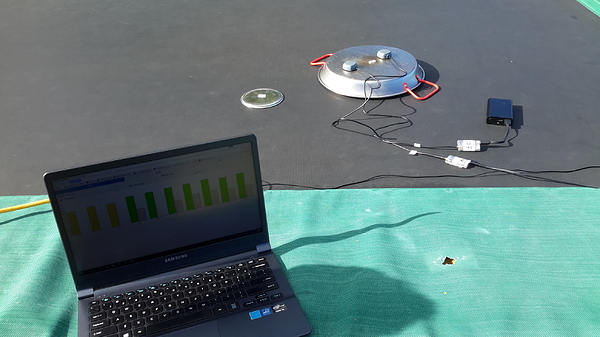 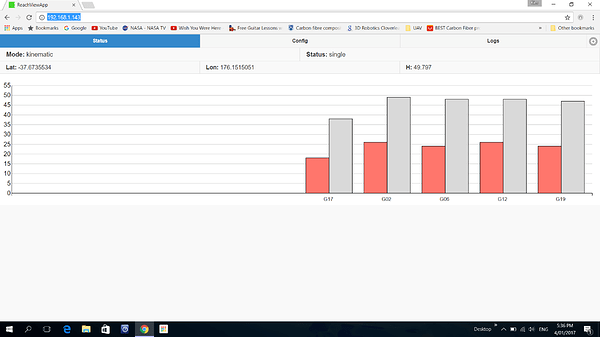 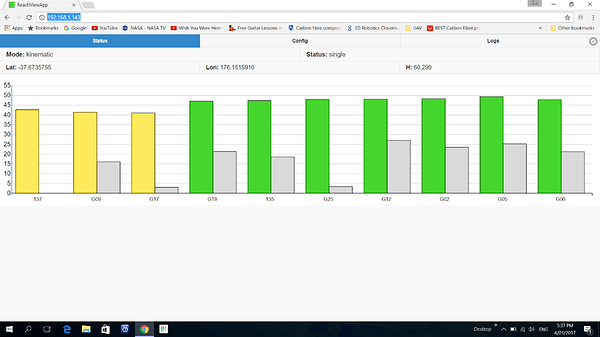 Do I understand right that you use only one ground plane for two antennas?

My next step would be:

Note which satellites are the problem. Are they all Gxx or all Rxx constellation or a mixture?

Hi Bide - Sounds like a good plan - I’ll set them up again both as rovers (on separate ground planes fwiw) and try it that way. I am out of town for a few days so I’ll report back with screen shots when I’m back.

Thanks for the replies

On a side note - using Ublox M8N GPS units with generic antennas on other equipment - why is there such a difference in the number of ‘locked’ satellites - from my experiment today it looks as if I get about 7 (from Reach View) and with the generic units we are cracking on with 18-20 /9as per Mission Planner)? Is it a signal quality filter or something?

ReachView v1.x just shows some of the satellites; the ones with the most SNR (AFAIK). All the others are still there in the background.

Hi Bide. OK that makes sense. Thanks for the assistence

Right I’m back in town. Here is what I have done:
1/ Set both Reach units to Single (Reach Default Settings)
2/ Placed each unit on a separate ground plane (CD with Tin Foil on it)
3/ Both units are within 500mm of each other using the same power supply.

Screen Shot 1 is the initial result
Screen Shot 2 is resultant by only making 1 change - I swapped the antenna between both units. Use IP addresses for reference to each unit.

(Looking at the status on these screen shots I took screenshot 2 as soon as the satellites appeared and 192.168.1.149 has probably not had time to work out where it is as it couldnt get a position due to the poor satellite it previously had. Similarly 192.168.1.100 hasnt had time to ‘lose’ its position.) 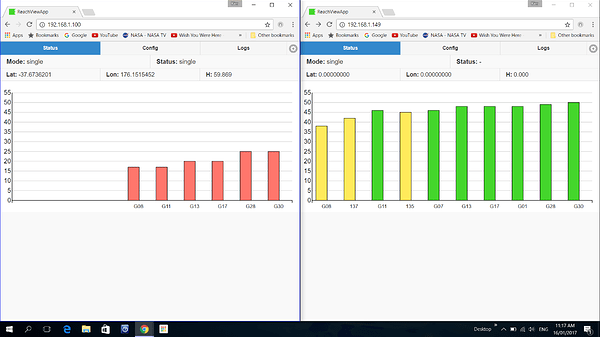 I’m now convinced its a faulty antenna - I’ll get on on order from Emlid.

If you want to change your antenna - please write to support@emlid.com with link to this post and number of your order.