Failure to liftoff with Raspberry Pi

I built a quadcopter and I seem unable to make it lift off or get off the ground despite the fact that its blades are spinning really fast. Here’s my build"
raspberry pi 2
navio +
RX 1804 2400K (X4)
QAV250 frame
Andoer power distribution board
power module
Viper 2S 2000mah 35C battery
SimonK ESC (X4)
5030 GemFan plastic props (2 pusher 2 puller) I can power it on and connect to it via MAVProxy. When I start apm on the drone the ESCs beep like this: beep beep-beep tritone
I can arm and run the motors and everything, and can even start it lifting off, but it never gets off the ground. I realized I had the motors configured in the wrong order yesterday, and before then it would slide along the ground. Now it just sits there. I can hear the motors gain speed and emit a higher pitch but it never seems to be fast enough to actually rise up.

Thoughts? Do the ESCs automatically calibrate with apm? I haven’t found a way to do it so I have assumed they do. Is it possible this setup is just too heavy?

It looks like that your propellers are mounted wrong if the motor rotations are correct like on the picture here: http://copter.ardupilot.com/wiki/connecting-the-escs-and-motors/ (Quad-X).

You can also check if they thrust in the right direction if you hold your copter in a hand and increase throttle CAREFULLY. if it thrusts downwards the props are definitely mounted wrong. BUT BE CAREFUL WHEN DOING THIS. THE PROPS CAN HURT YOU.

I’ve already checked, they’re mounted correctly and the configuration of the motors is right

If they’re mounted like on the picture I don’t think so… ;-). To clearify thinks I modified your picture a bit. If the spin direction of the motors are like shown here and the front of your copter is where the raspi connectors are they’re definitely mounted wrong and you have to swap the left and right on front and on back. 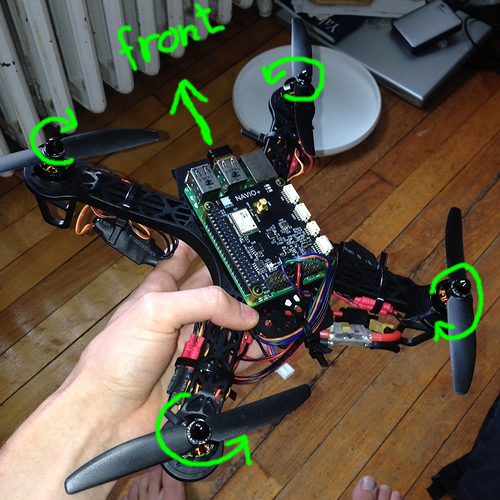 I also suggest that you revise wiring on your quad. Here is what I did, not perfect but a good starting point. You can shorten wires from motors to ESCs and firmly attach controllers to the arms. 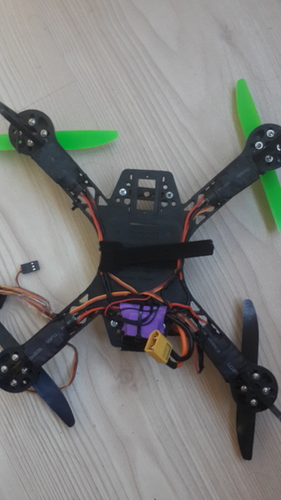 If you do not have a typo in your setup listing, you try to fly with a 2000mAh 2s battery, 5x3 props and 2400kV motors. I do not think this will work. My EMAX racequad barely flies with 3s and 6x3 props. And this is with a naze32, not a heavy RPi and Navio+.
You really should consider shortening the cabling and less connectors. A solder joint is always lighter than a connector pair. With a mini quad every gramm counts.

Edit: I just entered your setup in ecalc. I only added RPi, Navio+ and power module to the frameweight. Ecalc calculates an AUW of 457g. This means only 90g payload can be added, until ecalc thinks the setup is unflyable. Things get even worse, if you are flying in a hot or high climate.

haha oops you caught me, it’s an FPV250. Thank you. And wow yeah I’ll try to cut it down

Alright thank you I will. In yours how did you connect all of your ESCs to your power module without a pdb? I’m new to this

oh it seems you are correct. I checked before and for some reason thought I had it right. My bad. Thank you

@vlo but why would that make a difference in flight from a physics perspective? does apm really care as long as the motor blows the air down as i have it set up to do? just curious, I’m gonna switch it but wanted to ask

It does matter for yaw control. Yaw is only controlled through differential torque for most quadcopters. With your way of mounting the props, the torque will work in the opposite direction than Arducopter expects, causing the copter to spin out of control.
You did not mention if you are really using a 2s lipo.

oh ok thank you that makes sense. Yes I am really using a 2s lipo. That I know because it says on it ;p

And what is the flying weight of your copter?

According to the picture you have the straight edge facing forwards, but if I remember correctly that is also the lower edge. On those funny propellers the curved side is the upper/leading edge. Then they are probably on the wrong sides (CW on CCW).

Even if your setup is under-powered you should still be able to get it to hover a bit, just with more throttle. If the propellers are on the right way, at 100% throttle it must do something or at least hop around a bit.

I prefer the 45 pitch propellers from Gemfan because my motors (HK Baby Beast v2) have a lot of torque. If you can fit 6 inch propellers on try that too. They also have a different shape then (straight edge is really upper/leading edge on 6 inch props). I’m using three blade 6045 props which is extreme but very powerful, still efficient enough to get up to 8 minutes of flight time from a 2200 3S battery.

The ideal is to hover about 50% throttle of course. Check your motor and ESC specification is not exceeded before testing 6 inch props.

p.s. Don’t forget to cover the barometer (see documentation). Best get a case.

It hops around but that’s about it

…and the direction of the props? Is the curved edge higher? Then did you try swapping them around?

Yes to both of those. Although I’ll try swapping them around again

Could you please tell us the takeoff weight of your copter?

I used a bathroom scale and found it to be 1.2 lbs which is 544 grams. Not sure if that is correct as a bathroom scale is not exactly sensitive equipment. How do people usually measure the weight of their builds? Needless to say this is my first build

I do not think your setup is flyable as it is right now.
It needs around 85% throttle to hover. That does not leave enough room for stabilisation and maneuvering.
You should get a 3s lipo and/or 6x4.5 props if they fit.