Hi everyone! I’m building a quad, and I would like your opinion before I buy and crash it.

On top of that, I need a charger; this one looks good: IMAX B6AC V2. 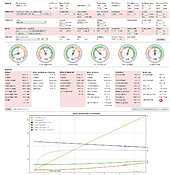 Ecalc gives me good numbers (note that I did kinda modify the underlying ecalc code in the screenshot), with the exception that the motors can apparently use up to 182.1 W, which is still OK but it could use more overhead IMHO. The only numbers I found about it is this review, which somewhere (at the “Underrated?” section) states that the motors should handle 294W (if I’m reading it right), which would be sufficient. Is that right? (Ecalc says the motors can only handle 220W…)

Also, will the power module suit my needs? Ecalc says the maximum current is 52A, but the more simple calculation of 4*30A (peak current of ESC’s) shows that it might be higher. Will that be ok?

Thanks in advance for any help!

The maximum possible draw will probably never be achieved, or at least just for short times. I don’t think this will be a problem. The rotors look like plastic, is it at least glass fiber enhanced plastic? I made very bad experiences with cheap propellers, because once such a propeller just exploded during the flight. It just got ripped apart next to the center hole.

While I’m not sure they are glass fiber enhanced, I don’t think DJI’s props are “cheap propellers”, and I’m rather sure they won’t rip apart mid-flight.

Plastic props are not so great, I agree with @dgrat , even the composite ones with the fiberglass inside can snap. They tend to warp from the forces created during flight.

Carbon fiber props can be sources for next to nothing. Although they might need to be balanced if you but the really cheap ones.

If you can go CF you won’t regret it. The flight characteristics really are preferable if you ask me…