Hello! What can i do to extend radio range for reach rs2? I am into a mountain area with a dense forest. I saw this antena on ebay Helium Antenna Set 5.8/10/10dBi LoRa EU 868MHz Nebra Bobcat Sensecap | eBay

Can it work with reach rs2?

Probably look for a directional antenna for the base instead.
Maybe consider a 4xx MHz system over the serial-port instead.

The longer antenna is flattening the dipole radiation pattern. Not necessarily a bad thing, but don’t expect a lot of rage over what you’re using. Like Wizprod said, a directional patch or yagi will give you the biggest range increase… In one direction though. Anything to the sides or behind will be severely attenuated. You could jump down the rabbit hole and try a Ardupilot antenna tracker that would keep your yagi or patch antenna pointed at you. 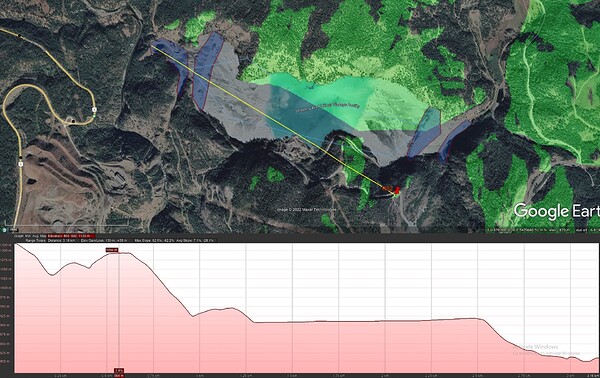 rtk1920×1211 314 KB
I don’t have a lot of experience with the lora radios from Emlid, but I gave them a try yesterday. Pretty surprised. The green areas are viewshed from my base location. Blue are areas surveyed. All those blue areas I was in had solid corrections and fix solution! I know, it’s only 3km but there’s a lot of dirt in the way lol. I was originally planning to do a base shift from the old known point to somewhere better, but everywhere I went was good.
3 Likes
SRBell (Shaun) March 19, 2022, 2:17am #4

BTW, this was an RS2 and an M2. Supposedly the M2’s radio has less range (think I heard that).

Can you please send me some examples of a directional antenna for the base and a 4xx MHz system.

LoRa radio is a low-range radio itself. Of course, the radio antenna is an important part. But original Reach RS2 antenna was designed as the best fit for our LoRa. So, a 3rd-party one can hardly help much, especially if you work in a dense forest.

I’d not spend time on testing different antennas and go with a couple of external radios, as Christian suggested. Or, if you have the Internet on a site, I’d suggest the NTRIP Caster option.

BTW, this was an RS2 and an M2. Supposedly the M2’s radio has less range (think I heard that).

Reach RS2 and Reach M2 LoRa ranges are the same.

It is a zone with no GSM signal. I will measure static there, and after that i can use radio and add to base known coordonates.

Band can be a big factor in radio range the 433 MHz band (UHF) can have a range of many klm, in the case of the RS2 its sub microwave at between 800 -950 MHz. Hight of antenna also plays one of the important parts in range, a 5.DB on a separate pod up as high as you can get it and free from obstructions such as trees and buildings. That mostly covers the base now the Rover, down low with antenna no at anything close to optimal in and out of trees and buildings, that is the weak link. Perhaps choosing a good base location and keeping logs and doing PPK if things get hairy is a more economical solution.