Exploring the Uninhabited Land with Drones and Reach: the Kame of Isbister

The mysterious and fascinating site, the Kame of Isbister, is situated in Shetland’s North Mainland near the North Roe. This place was studied several times, including the team of Extreme Archaeology series in 2003. The piece of land, covered with grass and absolutely uninhabited, it continues to attract the explorers – thanks to a secret series of structures.

Those structures are hidden on the sea-faced slope and can’t be seen from the land nearby. According to one of the theories, it can be an eremitical monastery settlement. This late Pictish / early Medieval site is hard to access – and that’s where drones and Reach come to help the explorers.

Discovering the Kame of Isbister

In 2019, Shetland Flyer Aerial Media in collaboration with Shetland College UHI and the Institute of Northern Studies decided to come back to explore the thrilling site. Their goal was to create a 3D model of the headland as well as the orthomosaic and digital terrain model to identify and map the monastery structures.

The setup for this study included: 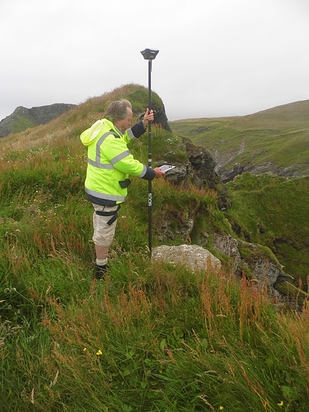 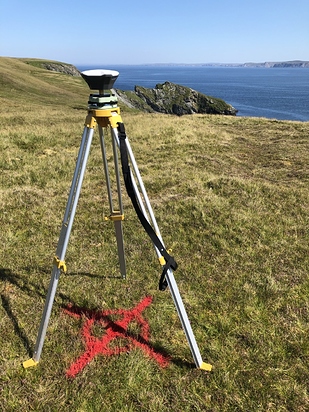 Reach RS+ collecting GCPs and Reach RS+ acting as a base

Since the site is hard to access, they decided to use the DJI Phantom 4 RTK SUA for this mission. The team planned to hold two flights. One captured both the Kame and a piece of the mainland for context, using the Ground Control Distance of 2.4cm/px. The second one was held on a shorter GSD of 1.9cm/px to capture more detailed pictures of the cape and structures.

Before the survey, the team used Reach RS+ to identify and establish the base mark for the drone on the mainland nearby. The base mark was then post-processed using the data from the OS Net reference station in Lerwick. Considering the long baseline (52 km), it took the team 4 hours to observe the mark with Reach RS+. Later, when the archaeologists managed to climb the headland, Reach RS+ unit was used to collect several noticeable control points.

Ground Control Points on the surface

During both flights, the drone’s base was sending the corrections in RTK mode. After the data from the drone was ready, the team proceeded with post-processing. Initially, the horizontal accuracy of the processed map was within 10 cm and vertical was 15 cm. After adding the control points gathered with Reach RS+ on the site, the error was reduced down to 6.5cm. It significantly increased the accuracy of the model.

The team performed the GIS processing in QGIS 3.4 LTR. Despite the long grass, they managed to distinguish each structure out of the orthomosaic using the 32bit floating point raster digital elevation model (DEM). During the post-processing, the team created the basic map with structures and contours, a hillshade version and a heat map.

You can have a look at the final 3D model here:

Drones Give a Helping Hand

If the site is hard to access, it’s not the reason to give up on surveys and further exploration. Drones can be of significant help when it comes to collecting data for projects like this. With proper prior preparation and setup, Reach and drone gather high accuracy data that is enough to create accurate models and maps of archaeological sites.

Reach RS+ and Reach RS2 are a great fit for setting the GCPs in RTK mode. Control points locations are recorded with the ReachView app available for iOS and Android. Choose your receiver for comfortable and accurate fieldwork. Explore new sites and places with Reach receivers!