Hello everyone.
Firstly, I’m new to surveying/GNSS. I bought a couple of RS+ a week ago for various purposes and generally found the learning curve quite enjoyable so far. Also, great products and solution. Well done Emlid

I’d like to run my thinking by some old hands if possible?

If I want to use a base-rover config, my understanding is that absolute accuracy starts with the base positioning. There are not many free NTRIP base stations in the UK at most places where I’ll be working and it’s not cost effective for me to subscribe to a commercial service at this point in time. So I’m working on the assumption that I can establish my own benchmarks by recording observations over several hours and PP against RINEX from a nearby OS Net station.

I’ve ran some tests over three days last week. I set up a receiver at a location where I was working doing other things. It was probably as bad as it could get for observations, being inbetween 2no. 50m radio masts, a power line and a 15m tree line on three sides. (But is was secure to leave the receiver over night!) The Kp index was also 3-4 and we had quite a bit of cloud cover. I’ll keep collecting observations everywhere I work to get a feel for things that affect SNR etc over time and process form various stations to also get a feel for varying distances too.

With this particular data set I proccessed the Rinex data in Emlid Studio. Really good bit of software. So good, that I didnt read any instructions, but just fiddled about until I got some pretty coloured lines! Considering that until a week ago, I thought Rinex were probably a German rock band, it’s very intuative.
Anyway after using a number of varying sample periods, I came up with the following over a 2 hour period. This was based on GPS only, as the OS Net station only observed GPS and GLO. There weren’t many GLO observations and their location varied quite significantly from GPS. 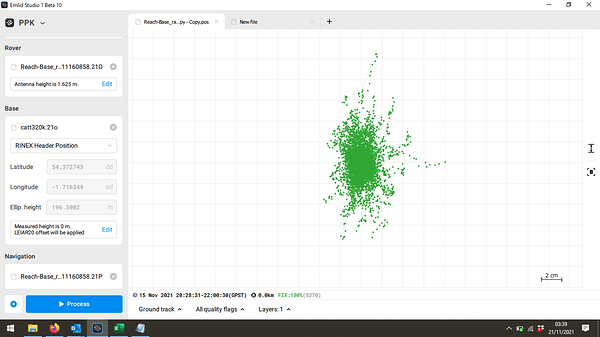 I surmised that if I take the visual cente of the grouping, this would be fairly accurate within a few mm. I took a few shots with the mouse, as did my friend and we copied them down…

I then thought that I’d check our aim by importing the .pos file into excel and calculating the median. Once in excel I filtered the sample down to roughly a 4x4cm area in the centre of the plot and calculated the Median.

So after all this, I’m still not sure whether this would be the correct method for establishing a known point. Is it accurate? Am I being too pedantic? Is there an easier way, workflow in the absence of an NTRIP stream?

Would love to hear peoples thoughts. Thanks for your time

You record an observation for 3 to 24 hours depending on the accuracy required. Record the data in the type required for the service, like Rinex for NRCAN PPP service.

Submit the data to the service right away for very close ultra rapid results, or wait two week then submit for the most accurate final results.

There is a step by step for PPP in the manual.

That sounds less intensive than what I’m doing and likely more reliable. Researching it now. Thank you

Hate to ruin the thread guys, but i dont think a L1 PPP is going to give you the accurate result you want.
I wasnt going to post this yet, Its supposed to be a follow up from the “long baseline vs vrs” topic 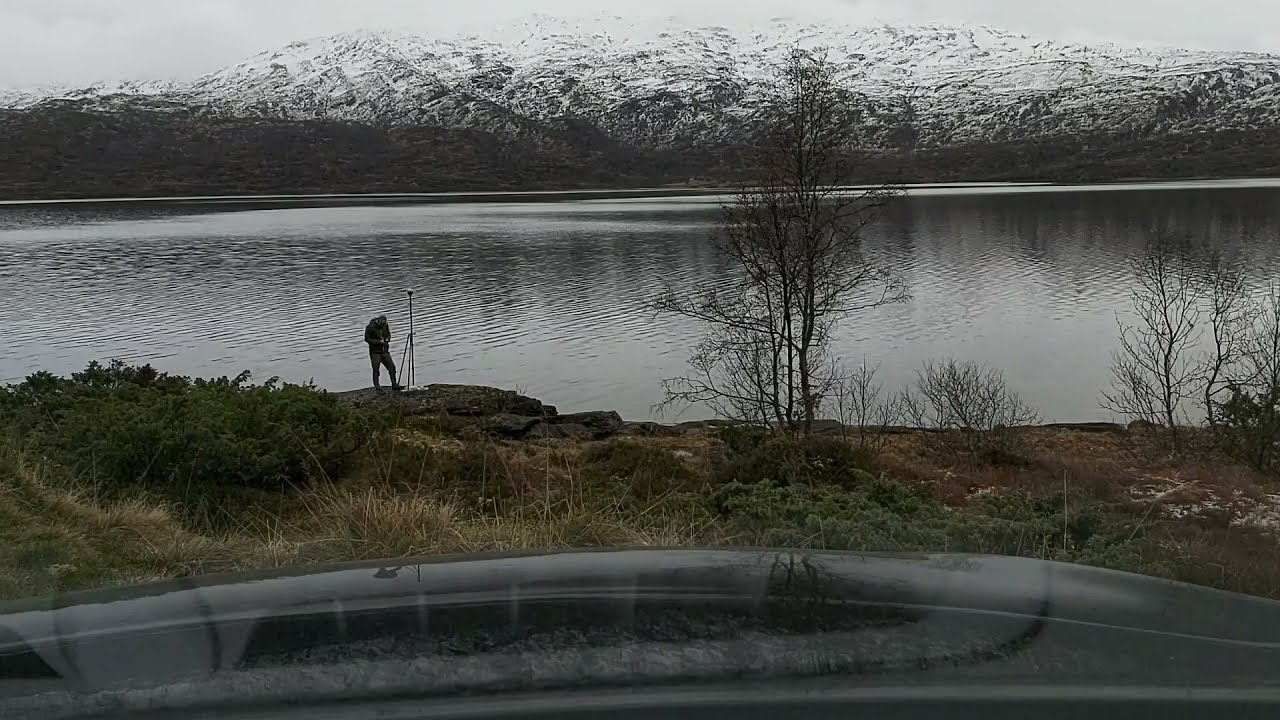 These numbers are from a 24hour PPP - Rapid. Have to wait another week for the Final. But I am not expecting much better with the final, maybe couple cm closer.

Anyways, here are the results from my RS1 with 24 hour log.

Thanks thats really useful. I’ve just been watching some of your videos and digesting. Until I can justify spending on an RS2, having a guage of accuracy of the RS+ will be useful.
I’ve submitted the data from the above post to NRCANN, which will be interesting to see the delta.

Awesome cannot wait to see the results of this. VRS commands some significant cash outlay and promises very good results.

I wonder if simple averaging of the corrections data of three base stations in an envelope around the rover weighted on their baseline to each base would act as a DIY VRS.

The couple of PPP’s I have tried, the Ultra rapid to final results barely changed in x, y but there was about 10cm of change in z.

As you’ve said, it would be interesting to see what proccessing against three stations would return. Just had a look on OS Net and there are four stations at:
7.24, 46.42, 50.30 and 53.63km from the site. Unfortunatly my analytical skills are not that good, but would be happy to pull the data and post on here if anyone wanted to play.

Its a little more technical than that,

VRS is currently a very magical and poorly documented technology on how they are actually pulling it off.

If the quality of the 7,24km station is ok, I would use this and ditch the rest. Its close enough to give you satisfying result with your receiver.
Are you able to pull the log from this station and record from your rs?

@PotatoFarmer I thought it would be… and a rabbit hole I dont want to go down!
Incidently, now that you’ve enlightened me to VRS I’ve taken a closer look and found that rtkfix.com offer access for about £20 for the day. So I’m going to record some observations from somewhere a bit more sensible, process against the rinex from an OS Net station, and compare to using rtkfix. The learning experience would unqestionably be worth the cost for a days access.
If it works out, I’ll then know that if suitable, I can use this if required and simply just pass the cost on to clients’ on a per job basis.

Any experiences of people using rtkfix.com would be useful to find out.

@TB_RTK Sure, this was the station that I processed against to produce the plot and data that this post was based on.
As a further lerning experience, I’ll pull the data for all four OS Net stations, re-process and compare the plots to see the variation with varying baselines.

So i suppose it’s back to my original question…If I am proccessing my data against the rinex from a known station that is sufficiently close by, is my methodology to decide on the coordinates for my benchmark of ‘throwing a dart’ in the middle of the big green bit on the plot OK?!

Once again, thanks everyone for their time so far. There’s not many forums online where newbs are made to feel welcome and helped so much

So i suppose it’s back to my original question…If I am proccessing my data against the rinex from a known station that is sufficiently close by, is my methodology to decide on the coordinates for my benchmark of ‘throwing a dart’ in the middle of the big green bit on the plot OK?

As a short answer I would say yes but there are some key elements to be done. Such as duration of time you spend to collect observation or numbers or sessions.
With only 7km baseline it doesn’t take much work but you need some way of validate its position. For this you need other observations to compare it against, preferably with few hours in between or e.g a vrs service. It also depends how accurate you need the bench. But if your vrs falls in the midle, I would say that’s a good start. The next few millimeter can you save for a later occasion

Glad to hear you enjoy the experience with Reach and Emlid Studio!

To calculate your base station position in PPK, I’d suggest using the Static mode with the Single solution option. It’s enabled by default in the Emlid Studio post-processing settings: 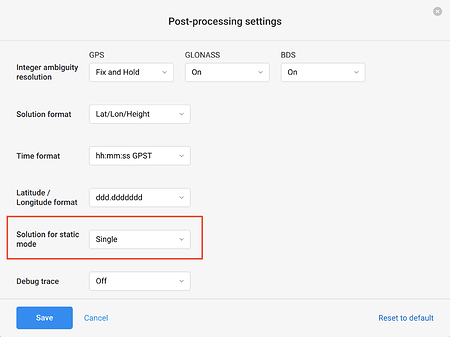 With the Single solution, you’ll get 1 point instead of a group right away.

I surmised that if I take the visual cente of the grouping, this would be fairly accurate within a few mm.

You can calculate the group’s center as described, but it won’t raise the solution accuracy to the millimeter level. Still, you can get centimeter-level accurate results with PPK, which is appropriate for many surveying applications.

Thanks @kseniia.suzdaltseva. I’ll give that a try and see what I get when compared to my manual ‘dart throwing’ method!