EMLID RS2 not getting Fixed and accuracy deviation

I have an EMLID RS2 installed in an open sky environment as a base station streaming correction over Emlid Caster NTRIP service to a number of other EMLID Rovers.

I have noticed that if I place the rover (which is receiving correction over NTRIP) over a physically marked point in the street, I get different coordinates everyday (usually a deviation of 2.5-4m).

I was told that my Emlid RS2 positioning settings should be set to Static and Base mode coordinates input to Average Fixed. However, when I do that, the EMLID RS2 base never gets Average fixed and stays Average Single and keeps waiting for “Fixed Status” as shown below.

Please let me know if my settings are correct or if I am missing anything here.

Both Base and Rover have the latest firmware and are placed in very open sky environments. 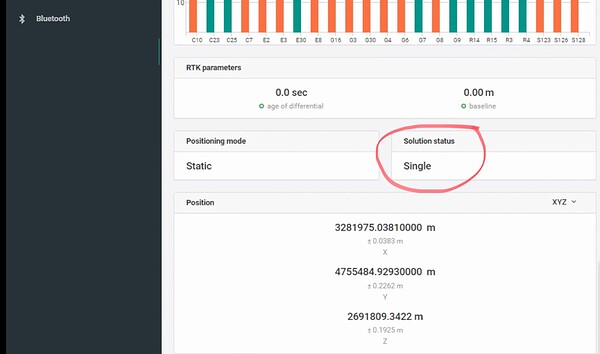 Are both these pictures the base?

If they are you need to send corrections from another source to the base to get an average fix as you are trying. But the top picture shows you are not receiving any corrections.

As soon as the field base has its average fix position, the established base corrections like cors or PPP permanent base is no longer needed.

Also unless you PPP your base point, or use a permanent properly set up Cors base to get average fix, or enter the data for the point manually for a known location, the datums between data will most likely be off.

A base and rover will always be accurate relative compared to each other, but getting the base to be absolutely accurate to a known datum takes extra preparation.

That’s correct, both images are from the base. I’m trying to use this base as “cors”. In other words this will be my absolutely fixed reference station to send continuous corrections to moving robots. So it must have not only relative but also absolute accuracy.

I did try the PPP method to find the exact position of the base and enter it manually but it still shows “Average Single” in the base.

I did try the PPP method to find the exact position of the base and enter it manually but it still shows “Average Single” in the base.

If you have received a position for your Base using PPP, then when you set up your Base, you will enter the coordinate that your received. The base will not receive corrections or be averaging a position and will never FIX. You already know it’s position.

The rovers will receive those corrections and they should FIX.

Single / Float / Fix is irrelevant to the Base if mounted on a known coordinate like you said you are doing.

Apologies if I’m misunderstanding your setup.

The base does not need to fix as explained above, it should know exactly where it is.

Once base has its locked coordinates, especially from PPP, It knows exactly where it is. All the base is looking for is the signals of the satellites, and how they get messed up coming through the ionosphere and atmosphere in relation to the known point.

Then the base after determining the errors, sends its ARP position and the correction needed to fix the rovers position calculation in reference to the base.

I agree with @dpitman’s and @PotatoFarmer’s suggestions: it isn’t necessary to achieve FIX solution with the base, you just need to know its precise coordinates. As you need an absolute accuracy, you can do it via several ways:

You can also read our guide about how to place the base and calculate its coordinates. It may help you to understand more of these approaches described above.