The new v1.4 image includes a couple of new features that ease your day-to-day work with Edge. The most prominent of those changes are:

You can read the more technical changelog over here.

A couple of other minor issues have been fixed as well:


We’re waiting for your feedback!

I installed QGC for Mac.

I have the latest MacOs 10.13.4, and Edge firmware update is not working.

EdgeFound.jpg1651×312 59.9 KB
I click on Connect as instructed, there is a MacOs dialog requesting my autorisation, 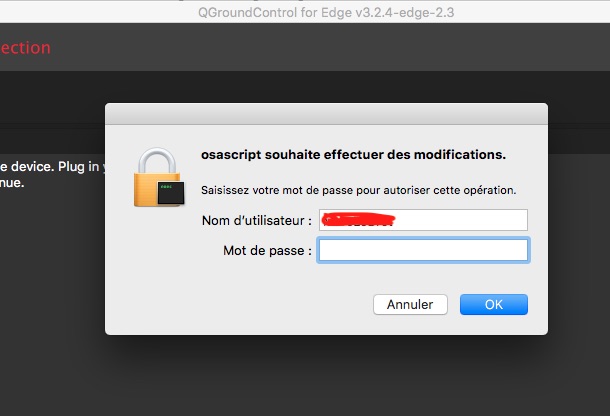 DialogOSX.jpg610×416 32.3 KB
then nothing happen… If I click again on Connect the same dialog came up.

Windows version is OK and firmware update is OK.

Hello, Marc
Thank you for reporting, I have a few questions:

Did you use Etcher during QGC running?
Did you see Initializing… info message in QGC’s text area?

Etcher is on my Mac but not running when using QGC.

No more messages in QGC window than on the screen copy.

RMK about Windows QGC: I use W10, drivers are installed. When QGC is running, there are W10 dialogs asking me to format the drive. I closed them without format but they came back…

Thanks for waiting,
It’s a bug of firmware updater on macOS

To solve this problem you should move QGC binary into a directory whose path does not contain
blank characters (such as space), for example ‘/Users/your_user/Desktop’.

We will fix the bug in the next release.

blank characters (such as space), for example ‘/Users/your_user/Desktop’.

No success on my Mac. I had a try in my desktop folder and another one with QGC at the root of the HD with the same result.

WOW. Now I just need to sell a kidney and maybe a lung to afford one. What a great product this seems to be.

Some of our users bumped into issues with camera stream not being restored after the camera lost physical connection and then restored later. Right now everything should be fine in this regard.

Due to poor old Gopro performance, I just received a Firefly 8S (90° Fov).

Video stream did not start if camera is ON before requesting Stream. If I request video Stream first, as soon as Camera is powered, video stream is OK.

Stream is also OK with Photo at 16mp (one every 5sec). There is just a short black when the photo is taken.